There have been controversies on the appropriateness of taking a relationship to the social media.

By relationship, I mean a romantic one that is yet to culminate into marriage.

While some are of the opinion that excitement shouldn’t make you announce things prematurely, others opine that no one should be inhibited from expressing themselves by making their love life public.

My opinion? I think it’s a matter of choice.

I have come to believe that there is no one size fits all to life and love matters because we are very different and can never respond to situations the same way.

Some factors influence people’s decision to make their relationship public:

Personality is a set of unique traits that differentiates a person from others.

And of course, personality is basically determined by nature and nurture, that is, inherited genes and environment.

People who are extroverted, open, and adventurous are more likely to make their relationship public than those who are introverted, secretive, and fearful.

Those who grow up in an environment where love is publicly shown and declared are more likely to make their relationship public. To them, it’s not a big deal.

But people who grow up in an emotionally restrictive environment are more likely to feel uneasy about making their relationship public.

Some people who have experienced painful heartbreak(s) and are tired of showing people different faces as their lovers may want to make their next relationship private.

Paranoia refers to extreme suspiciousness and distrust of others.

Some people are scared of having their partners snatched if they make them public, so they’d rather not show them to the world.

Do you blame them? I, however, think that a person who is snatched wants to go, and is not worthy to be kept. It’s not your duty to ensure that a partner is faithful.

Some are afraid that the relationship might fail if they make it public, so they’d rather keep sealed lips until they have pre-wedding or wedding photos to pepper the public with.

What are the pros and cons of taking your relationship to the social media?

One, I think the major pro is that it increases the possibility of verifying the marital status of the person you are dating.

There has been a recent surge in the number of married or engaged men who are posing as single men just to rob women in every way- financially, emotionally, sexually…

I once wrote on Facebook that ladies should post the pictures of men who ask them out on the social media and ask if anyone knows them, just to be sure that they are indeed single.

It may be funny but desperate times require desperate measures. You might be fortunate enough to have someone who knows your partner very well to confirm his/her marital status.

Yes, ‘her’ because some women are guilty of this too. They are either married or engaged, yet lead a man on because of what they can get from him.

Two, declaring your relationship on social media also shows that you and your partner are proud of each other.

Some people celebrate their lovers on social media yet treat them like trash.

Three, making your relationship public can save you the stress of unwanted proposals from other suitors.

It could serve as a ‘keep off’ sign to gentlemen.

I wrote gentlemen because some men don’t care. Some even have the nerve to go after married women and some have the ungodly guts to woo an obviously pregnant woman, not to talk of making your relationship public.

In fact, for some, the more unavailable you are, the more intense their interest in you.

One, making your relationship public scares away other intending suitors

Who knows if you could get a better choice, because you are not married until you are married?

Some people even have problems dating a person who was once an item with another person and everyone knows about it.

Two, you could lose the privacy of your relationship as people tend to refer to or even tag your partner in their comments. But if you don’t mind, I don’t think this should be a problem for you.

Three, some people are unfortunately stuck in horrible relationships and are hesitant to break up because they have made a public announcement and they can’t bear the shame.

This is a terrible thing to do. You shouldn’t hesitate to quit a relationship even if the whole world knows you two together.

You shouldn’t stay in a relationship to please others. You are the one in the relationship, and you will suffer the consequences of your choice.

Four, if you have been declaring your relationship to the public, the public will take up the unpaid job of counting your exes for you, and you can’t even write about your ex(es) without them knowing who you are referring to. But if you don’t mind, then it’s not a problem.

Five, if the announced relationship doesn’t lead to marriage, the public expects that they should be informed since they were aware when the going was good.

More so, who knows if someone who is interested in you is holding back because they believe you are in a relationship with someone else, whereas you have broken up?

What do you think? Which is weightier? The pros or the cons? Which would you rather do? Go public or remain private until marriage? 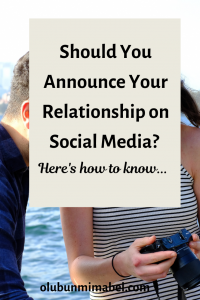 30 Funny Questions for Couples to Have a Great Time

#1 Mistake Women Make in the First Year of Marriage

7 Things Never to Sacrifice in a Relationship