Not everyone will marry their first love because not every first relationship will lead to marriage. Some of us will have to kiss some frogs before meeting our prince charming.

The earlier you understand that not every relationship will last forever, the better you’ll be able to handle breakups.

But the truth still remains that breakups could be painful especially if you really love the person.

So, at one time or the other, we’ll find ourselves comforting someone who is going through a painful breakup. And in a bid to do this, we innocently use some words we think should make them feel better, not knowing we are making things worse for them.

This is why we need to know the words we shouldn’t speak to someone going through a painful breakup.

Here are things never to say to someone going through a breakup:

I know we often say this to make the heartbroken person feel better but it’s not the right thing to say, especially for someone who has invested time, energy and resources in the relationship.

If they knew the person wasn’t meant for them, they wouldn’t have invested all that in the relationship.

Even though the heartbroken person would later realize that the ex wasn’t meant for them, you’re not the one to tell them that, especially when they’re mourning the loss of the relationship.

Yes, they will but at the moment, let them deal with the pain of letting go of someone they’ve shared intimate moments with.

3. “Stop crying over him. He’s happy wherever he is, maybe with his new girlfriend”

When people cry during a breakup, it’s not always about the ex. Sometimes, people cry because of the time and resources they’ve put into the relationship.

They cry because of the sweet memories they’ve shared with their ex.

Leave them to cry. Crying helps to relieve tension and stress. Let them cry out their heart. It’s better than bottling up their feelings.

Hey, not so fast. Getting over a breakup could take some time. Telling them to snap out of it and move on sounds controlling and hasty. Let them move on at their own pace.

While some people are able move on within a few days, some need time, because no two relationships are the same.

5. “Stop talking about him”

If a heartbroken person is talking about their ex and the times they shared together, don’t try to shut them up. It could be their own way dealing with their pain.

Sometimes we warn our friends about a relationship, but because they are in love, they don’t listen to us.

This doesn’t make anyone feel better because saying an ex doesn’t deserve them is like saying they made a wrong choice in the first place.

So, it speaks more about the heartbroken person than the ex.

More so, just because someone quits a relationship doesn’t make them a bad fellow.

Relationship is a thing of choice. It’s not a proof of morality. Therefore, someone breaking up with you doesn’t make them evil.

Rather than say these 7 words to a heartbroken lady, just comfort them with your silence if you don’t have the right words. 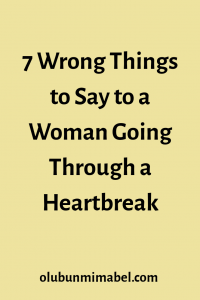