We get into relationships, especially if we start one with the intent to be monogamous, and expect our partner to be faithful to the commitment as well.

But we know this is not always the case.

Sometimes, we just fall for the wrong people and there is nothing worse than being unaware.

While we all desire to know if our partners are being unfaithful, we don’t always have that opportunity. All hope is not lost though; we just have to be armed with the right information.

It is great to know if your boyfriend is cheating but it is even better if you know he will cheat before he does.

That information will help you make the right decision.

I’ll not assume that cheating is a deal-breaker for every woman.

Strange as this sounds, it’s true that some women don’t see cheating as a big deal.

Even though I said that I don’t obsess about being cheated on, it doesn’t mean cheating isn’t a huge deal for me. It really is.

Although human beings are unpredictable and we can’t always be sure of what a partner would do to hurt us, there are usually red flags to observe if we are smart enough.

So, yes, you can predict if your man will cheat on you based on some red signals.

What are the sure signs that he might cheat on you?

Below are 17 signs that he could cheat on you:

One of the greatest attributes of cheats is that they are very inconsistent because they lie a lot.

Men whose words you can never trust because they are either always caught in a lie or their stories never add up are more cheat.

Because cheating requires a lot of lying.

Lying about their intentions, locations, and activities.

Read: 13 Signs that Your Partner is LYING to You

I recommend maintaining a level of privacy and boundaries in relationships, however, a relationship based on secrets is headed for the rocks.

He shouldn’t be keeping secret with a woman he claims to love.

If you have caught him in several lies, if he is always evasive or if you simply cannot figure him out because he is not plain, then there is a high chance he is even already cheating on you.

3. He keeps you a secret

With the popularity of social media and many people posting about their relationship on social media, it is okay if either of you doesn’t feel the need to do that.

It is also okay if either/both of you don’t feel the need to share every detail of your relationship with friends and family.

But if he keeps you away from friends and family, introduces you as a friend instead of his girlfriend/partner or any other endearment, he probably will cheat, is already cheating or doesn’t have the intention of marrying you.

4. He is always chatting on his phone but not with you

If your partner is always chatting on his phone and the number of times he is talking to you cannot be measured with the hours he spends on his phone chatting especially with women, there is a cause to raise your eyebrows.

There has to be a genuine reason he is chatting for hours with anybody else besides you.

It can happen sometimes with family or friends or business associates and the likes but if it happens every day, it is likely not one of these people and a huge indication of cheating.

5. He doesn’t involve you in his life

A guy who loves you will want you to be involved in his life. He will introduce you to people that matter to him, talk to you about his plans and seek your opinion on issues.

If he is not interested in doing any of the above with you, he’s probably doing it with another person.

A selfless person who considers the feelings of others when they want to act or are thoughtful will not intentionally hurt others.

But a selfish person doesn’t care about others, so they are more likely to cheat.

If your boyfriend is selfish, he wouldn’t think twice about cheating on you because he only thinks about himself.

7. He follows a lot of women on social media and is active on dating sites

A man who follows a lot of women on social media is suspicious.

If they are friends and family or women he is somehow related to, then that is okay.

However, if these women are random women or he goes about dropping thirsty comments on the pages of female celebrities or women who post raunchy pictures, it shows disrespect for your commitment.

There’s a lot of emotional infidelity (which usually leads to sexual infidelity) going on on the Internet these days.

As a matter of fact, in this age of high internet connectivity, social media activities, and the proliferation of dating websites, it’s much easier to cheat. Cheating is just a click/chat away.

According to Statista, ‘During a January 2019 survey, 49 percent of dating app users stated that they were using online dating services to look for an exclusive romantic relationship. A further 20 percent used online dating for non-exclusive romantic partners and 23 percent of respondents stated that that they used online dating apps and services explicitly for sexual encounters. The same survey also found that dating platform or app usage was more popular with male internet users than among female ones. Dating sites and apps were most popular among younger internet users – 14 percent of U.S. internet users aged 18 to 34 years were currently using dating sites or apps and a further 29 percent had done so previously.”

If your partner is constantly surfing dating websites and has dating apps, what exactly is he looking for?

I did a survey on my Facebook page, asking women if they’d be bothered if their boyfriends are on dating websites/apps.

90% of the women said they’d be bothered. “What is he looking for?” they said.

Some guys cheat but they show a sort of “respect” by keeping it away from their woman.

It is still disrespectful to cheat and should definitely be unacceptable but it shows he is, at least, aware of the relationship.

But a man who openly flirts in front of you, is showing you openly that he doesn’t mind being with other women and you should believe him.

Read: How to be a Woman a Man Respects in a Relationship

9. He is all about the physical

A relationship should definitely be beyond the physical. If you were just there for the “benefit”, then the physical is enough.

If your man is only interested in you sleeping together; if he has no interest in any form of emotional connection with you; if he is not interested in knowing you and you knowing him, he is very likely going to cheat.

This is because a physical connection can be shared, it takes having an emotional connection to want to stick to one person.

10. He is addicted to adult videos

Many people who are addicted to adult videos are likely to have an unhealthy relationship with s*x because they will keep looking for the feeling that the adult videos give them.

They will not act on the reality that it is all acting; all they are concerned about is replicating what they see and since it is unreal, they keep looking.

And since you are someone who wants a real relationship, you might not be able to give them what they want.

11. He is afraid of commitment

One of the major ingredients of a healthy relationship is commitment. A man who is committed and has shown you his commitment will likely be faithful.

If you can, however, see that he is reluctant to commit, then it means he is not ready to stick with you and it is one of the signs that he’ll cheat on you.

People say a cheat is always a cheat. While this is honestly not always the case, old habits really are difficult to break.

If he has cheated before, he is more susceptible to cheating again.

13. He has cheated with you

I mean, this goes without saying. Apart from the law of karma, a man who cheated with you will most likely cheat on you.

This is because he didn’t get you the right way in the first place, so it is unlikely that he will respect you enough to stay faithful.

Also, he is clearly a cheat and most people who have cheated before are likely to cheat again except desperate measures are put in place.

14. He doesn’t respect you or women

If he sees women as property, he will see no reason why he should be faithful to one.

It takes love and a great amount of respect for one’s partner to commit faithfully to a relationship.

The way to know your partner’s default behaviour is how they act towards others. So, a disrespectful man sees women as property that he can use as he likes.

15. His father is/was a serial cheater

A man’s first male role model is usually his father and it goes without saying that his father’s lifestyle will serve as an example for him.

Many men who cheat have/had a father who is/was promiscuous.

Even though some of these men hate(d) their fathers’ lifestyle and promise(d) themselves not to act like their fathers, some still end up replicating such a lifestyle.

So, it takes a lot of conscious effort and discipline for a man to live differently from what he was constantly exposed to growing up.

16. He moves with friends who cheat

Similar to the above, one’s friends have a great influence over one’s life.

You have probably heard these sayings, “Birds of a feather flock together” or “show me your friends and I will tell you who you are.

While some people might say that it is not always true, people are only friends with those whose lifestyle they agree with at some level.

They can be acquaintances but when it comes to friendship, you are only friends with people you agree with and if you keep being around them, it is only a matter of time to do as they do.

If he moves with friends who cheat, it is only a matter of time before he does the same.

17. Your intuition tells you he is cheating/will cheat

This is different if you are insecure, clingy or paranoid. If you are any of these, you will suspect even the most innocent action.

But if you are secure in your relationship and your intuition is screaming “red flag”, then it is very likely that you are with someone who will likely cheat on you.

While these signs are just predictions, it’s better not to turn a blind eye to them, so you can make informed decisions.

You can also share your concerns with your man if you think that will help you achieve some clarity.

Read: How To Make Someone Like You Over Text 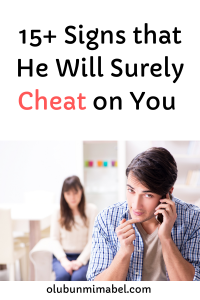 I want to learn more about relationships. naomimorales263@gmail.com

Hi, Naomi. You can subscribe to the blog for more articles.

This writer has issues with sex if they can’t even spell out the word sex.

It's because of Google. I don't want to be backlisted. You should have asked before making inaccurate assumptions or jumping to conclusions.

It’s always printed “he is” or “he has” or “he will”. Where’s the she will or she is. Women cheat more than men do. I have had two wife’s. I was committed and both of them cheated.

@Andrew, Come and marry me I want that loyalty ill give it back 200%

Sorry about your experience, Andrew.

But the title is focused on men, not women.

There are other women-focused titles here as well.