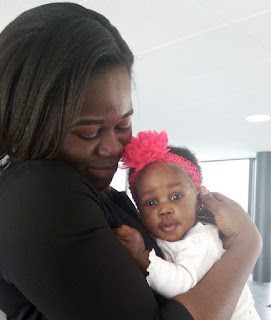 Hi guys, and welcome back to my channel. Oops. Sorry, blog. No thanks to YouTube. Hihihi.?

Welcome back to my blog. It’s so good to be back after the long hiatus. Judging from my title, you know why already. Thank you, thank you, I know you’re congratulating me.?

So, I’m back with a bang and things will take an interesting turn around here as I’ve added two more categories to my blog menu- Pregnancy&Motherhood and Nigerian in Diaspora. You don’t wanna miss any of these.

It’s three months being a mother to another human being. Scary stuff.  I told my Facebook friends that I was going to write a memoir of my pregnancy and childbirth. Yeah, because I had a quite spectacular story that can fill the pages of a book. However, that will not stop me from writing articles on pregnancy and motherhood. Don’t worry, I won’t give spoilers. ?

Motherhood is a sacrifice; starting from conception till the day we breathe our last, a mother’s job never ceases. Enough of talk. Let me share with you FIVE things that motherhood has changed about me:

1. I am easily irritated by human mess and pungent stench. It’s so bad that I rarely look at my own mess inside the toilet. I usually flush before I stand up from the toilet bowl so I won’t have to see the product of what my intestines did with what I ate.

Forget the fact that I sometimes release farts that make me want to run away from myself. I just can’t stand seeing my poop let alone another person’s poop. It’s not a big deal for some people, but it is for me. Whenever I have to use the toilet anywhere, I scrutinize the toilet bowl for any poop stain. If I find any, no matter how tiny,  I wash it off before I place my beautiful bum on the toilet. My husband would always say to me, “Your eyes will always see what you want them to see.”

“But if it’s not there, my eyes will not see it na,” I would reply. I don’t have visual hallucinations ke. ?

This is why I use the toilet in a way that anyone who uses the toilet after me will bless me. Y’all should be like me.

Nursing a baby is a season of daily frequent diaper changing. This I do without an iota of irritation. In fact, sometimes, I get stained with my daughter’s poop. Ewwww. And sometimes, my baby does her business while I’m eating.

I still don’t view my poop and others’ poop still irritate me but with my baby, it’s different. Though my husband and I do the diaper changing, so I take her to him when I don’t feel like it.  I know her poop will smell stronger as she grows and eats other foods but when I get to that bridge, I’ll cross it. We’ll cross it.?

2. Being a nursing mother means you can’t wear any attire of your choice. You have to wear clothes that make breastfeeding easy for you.

Since I had my daughter, I shop for clothes with breastfeeding in mind. Though I’ve defaulted twice by buying two gowns I really liked but I’ve not worn them yet out of fear of embarrassing myself.

Two weeks ago, I dared to wear an Ankara jumpsuit to an outing and put some milk inside a feeding bottle for my baby. We stayed longer than expected at our host’s place and my baby began to cry. She refused bottle feeding and there was no way I could feed her without pulling my jumpsuit down to the waist. Hia!

One of the guests said in Yoruba, “Breastfeeding mother to n wo jumpsuit. Iya omo to n se sisi.'” Meaning, a breastfeeding mum that wears a jumpsuit. A nursing mother that dresses like a young girl. Something like that. In short, she meant- this ain’t the time for this kinda slaying. You know what I’m saying?

I felt so embarrassed eh. I had to enter the children’s room to breastfeed my baby.

Since then, I wear clothes that make breastfeeding a piece of cake for me. I’m glad I still fit into some of my pre-pregnancy clothes that serve this purpose perfectly.

Babies are unpredictable. They may feed from the bottle today and refuse the same the next day. So, motherhood influenced my fashion choices.

3. My sleeping pattern changed since pregnancy but as a mother, it’s a different ball game. While I was pregnant, I dreaded the nights for three major reasons (which you’ll read in my memoir) but as a nursing mother, I look forward to the nights just to have some rest. Even though my sleep is usually altered by my baby’s desire to feed, the fact that I’m able to sleep just a few minutes after hitting the bed is a thing of joy for me.

4. Motherhood has made me to not only appreciate my mum but also every mother. No matter the number of women that conceive and give birth per minute, motherhood remains a very big deal. Common isn’t the same as trivial. No woman’s experience should be trivialized just because millions of other women are in the same condition. Each woman’s pain and experience is peculiar and should be treated as such.

For some of us, pregnancy is a fulltime job and birthing a child is a very traumatic experience for some others. Women need nothing short of great love, care, and support. When I see women who have two or more kids, I marvel at them. Like, how do you guys do it? I have just one and I’m still struggling. Does it get better with time? I hope so.

Motherhood has made me more empathetic towards women. It is the greatest fulfilling unpaid job. Before, I used to be so judgemental of stay-at-home mums. But now, I value and respect their choice. Not everyone has the strength to juggle raising kids and building a career. Some women put their career on hold to birth and raise kids, especially when they don’t have any help. I think this is a worthy cause, and instead of looking down on these women, we should encourage them.

Some say you can be a stay-at-home mum and still work. Even if you don’t work, raising kids is a big work on its own! And men, especially, should value and respect their wives for that. These mums should be given monthly allowance and not be made to depend on their husbands for everything until they are able to get back on their feet.

Any man who disrespects his stay-at-home (for the kids’ sake) wife deserves to be castrated. Yes! I said that. Fe
el free to sue me. Because stories abound of men who maltreat their wives because they are the ones who bring in the money. I say again, such men deserve to be castrated. Nonsense!

5. I’m learning how to multitask more, as a mother. Some nights ago, after spending some hours trying to get my baby to sleep, it dropped in my spirit that if I waited till I have some hours to myself to get some things done, I’d never achieve much. So I needed to learn how to do some things such as reading or writing while attending to my baby.

Of course, most of the time, caring for a baby  requires your full attention, but there are times you can do some other things alongside. And this I’m learning to do.

I still have more to share but I don’t want to bore you. I guess there’ll be a second part to this post. *Shines teeth*

Are you a mum? In what ways have motherhood changed you? Don’t hesitate to share.

"My life is not my own." So relatable! Lol .You're lucky to be your own tailor.

I'm also waiting for improvement in my sleep pattern too. Lol .Thank you

I hope and believe the same too. Thank you .

Hmmmm. You're so right. It's indeed a total package .

Thank you, Susan. You've said it all .