Without a doubt, Michelle Obama is one of the most inspiring women of our time. Apart from being the first African American first lady of the United States, she’s a woman that exudes grace, admirable intellect, and beauty.

Her book, Becoming Michelle Obama has been a best-seller since its release and it’s a great opportunity to get to know her beyond being a former first lady.

There are lots of inspiring messages to learn from the book but here is a list of 20 Becoming Michelle Obama Quotes to inspire you:

2. ”Even when it’s is not pretty or perfect, even when it’s more real than you want it to be, your story is what you have, what you will always have. It is something to own.”

4. ”Kids know at a very young age when they’re being devalued, when adults aren’t invested enough to help them learn. Their anger over it can manifest itself as unruliness. It’s hardly their fault. They aren’t bad kids. They are just trying to survive bad circumstances.”

5. ”Most people were good people if you just treated them well.”

7. ”So many of my friends judged potential mates from the outside in, focusing first on their looks and financial prospects. If it turned out the person they’d chosen wasn’t a good communicator or was uncomfortable with being vulnerable, they seemed to think time or marriage vows would fix the problem, but Barack had arrived in my life a wholly formed person. From our very first conversation, he’d shown me that he wasn’t self-conscious about expressing fear or weakness and that he valued being truthful.”

8. ”I knew he could handle a partner who had her own passion and voice. These were the things you couldn’t teach in a relationship, things that not even love could really build or change.”

9. ”Even a happy marriage can be a vexation, that it’s a contract best renewed and renewed again, even quietly and privately even alone.”

10. ”The noise does not go away, but the most successful people I know have figured out how to live with it, to lean on the people who believe in them, and to push onward with their goals.”

11. ”This may be the fundamental problem with caring a lot about what others think: It can put you on an established path and keep you there for a long time. Maybe it stops you from swerving, from ever even considering a swerve; because what you risk losing in terms of other people’s high regard can feel too costly.”

12. ”It hurts to live after someone has died. It just does. It can hurt to walk down a hallway or open the fridge. It hurts to put on a pair of socks, to brush your teeth. Food tastes like nothing. Colors go flat. Music hurts, and so do memories. You look at something you’d otherwise find beautiful: a purple sky at sunset or a playground full of kids and it only somehow deepens the loss. Grief is so lonely this way.”

13. ”Inspiration on its own was shallow; you had to back it up with hard work.”

14. ”Fertility is not something you conquer. Rather maddeningly, there’s no straight line between effort and reward.”

15. ”There was no formula for motherhood. No single approach could be deemed right or wrong.”

18. ”If there is one thing I have learned in life, it is the power of using your voice.”

19. ”We are built differently, my husband and I, which is why one of us chose politics and the other did not. He was aware of rumors and misperceptions that got pumped like toxic vapor into the campaign, but rarely did any of it bother him. Barack had lived through other campaigns. He’d studied political history and girded himself with the context it provided. And in general, he is just not someone who is easily rattled or thrown off course by anything as abstract as doubt or hurt. I, on the other hand, was still learning about public life. I considered myself a confident, successful woman, but I was also the same kid who used to tell people she planned to be a pediatrician and devoted herself to setting perfect attendance records at school. In other words, I cared what people thought. I’d spent my young life seeking approval, dutifully collecting gold stars and avoiding messy social situations. Over time, I’d gotten better about not measuring my self-worth strictly in terms of standard, by-the-book achievement, but I did tend to believe that if I worked diligently and honestly, I’d avoid the bullies and always be seen as myself.”

20. ”Becoming isn’t about arriving somewhere or achieving a certain aim. I see it instead as forward motion, a means of evolving, a way to reach continuously toward a better self. The journey doesn’t end.” 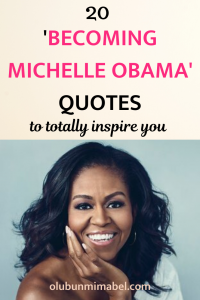