Women have always been the ones afraid to lose their men.

This is why some men think they are doing a woman a favor by dating or marrying her.

Let’s be honest; society hasn’t been exactly fair to women in their expectations of us.

Women are considered incomplete without a man to call their own, no matter how successful they might be in their careers.

People are always interested in who a woman is dating and not dating.

But I encourage women to swap positions and be the ones a man is afraid to lose.

It’s such a great position to be in.

Don’t get me wrong; I’m not saying you shouldn’t value your man.

I’m just saying no one should think they are doing someone a favor by being in a relationship with them.

I’m also saying no woman should ever put herself in a position where she has to fight for a man’s commitment or struggle to keep a man because she has the perpetual fear of losing him.

Every man would be afraid to lose a woman who means the world to him.

A woman who has flaws, imperfect, yet perfect for him.

A woman who is solely a part of him.

And here is how to be that woman a man is afraid to lose:

As a woman, have confidence in yourself, in your power as a woman.

You need to have that confidence where you know you don’t have to be less to keep a man.

Real men do not want to take you down; they want to rise to meet you where you are. Know that you matter a whole lot.

Believe in yourself. Be someone you can count on.

Stand up for yourself, do not let anybody treat you poorly or any less.

When you know your worth, you’ll know that any man who has you is a lucky one.

You won’t let anyone treat you lesser than you deserve, no matter how flawed you are.

Please know your worth and never settle for less.

A man is likely to treat you the way you treat yourself.

Why not set an excellent example for him?

A woman who knows her worth doesn’t go into a relationship seeking worth; instead, she brings value into the relationship.

#2 Add value, bring something to the table

No sane man would ever want a woman who is always demanding and hardly ever contributes.

While a man could be with you because he loves you, it’s not always about that only.

Men stay with women who bring something to the table, women who add value to them in one way or the other e.g.

giving suggestions that help his career

being his number one fan

Read: the secrets of the best girlfriends ever.

When we talk about ‘bringing something to the table, women usually think it’s all about earning money, being financially independent, or contributing financially.

Financial independence and contribution are essential, but not all there is to bringing something to the table.

If you are not contributing financially, does that mean you are not bringing something to the table or adding value to the relationship?

Money or the lack of it shouldn’t define you or determine your value.

You can add value in the other ways listed above. Money is not everything.

So, if you are not adding value to the relationship or bringing anything to the table, why would he want to be with you?

Will you want to be with a man who adds nothing to your life? Except, of course, you’re dickmatized. 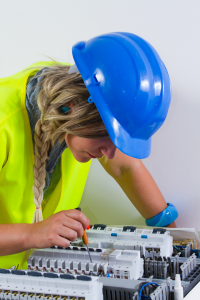 Don’t let your life revolve around the relationship.

This is where you should know that, whether the relationship crashes or not, you are still who you are.

Do something by yourself.

Be independent and also interdependent in the sense that, even though you and your partner are good together, you’re good on your own as well.

Whether it works out or not, you are still you, and it shouldn’t change anything.

It shouldn’t leave you crashing like a pack of cards and having to start from scratch.

Get a life, own one. 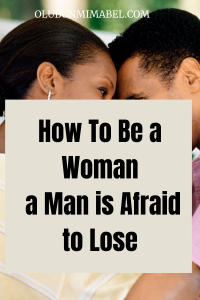 Self-esteem is your opinion about yourself.

Feel good about yourself and know fully well that you deserve respect.

You don’t need a man to tell you you you’re amazing before you believe you are.

Place a high value on your opinions and rules without being unreasonable.

Say your mind without the fear of rejection, but be open-minded as well.

Be original. Be real. You don’t have to fake it.

Don’t try to be someone you are not to impress a man.

A lady once told me her boyfriend said he didn’t like that she likes to eat (mind you, she’s not overweight).

This is a lady who hosts a radio program.

She had to quit the relationship because she was becoming choked trying to be who she wasn’t.

I’m not saying you shouldn’t work on your excesses, but you shouldn’t pretend to be who you are not to make a man wants to be with you.

Love thrives when you are with someone who loves you for who you are.

A man that complains about the things that make you isn’t meant for you.

Don’t hesitate to send him away from your space.

You don’t need a man who makes you doubt yourself and your authenticity.

It is not always about you. Put your partner’s feelings into consideration as well.

You don’t have to say everything that’s on your mind if it will hurt your partner.

Some women are so demanding when they want something; they don’t care how their men will get it so far he gets it for them.

No one wants to be with a selfish partner.

#7 Be proud of yourself and your man

There is no point in being with someone you are not proud of.

He might not be the wealthiest man or the most handsome man on the planet, but he’s the love of your life, and you are proud of him.

A man would know if you are proud of him or not.

A man will be encouraged to be a better man when he knows that you are proud of him.

If you are ashamed of your man, there’s no point being with him.

Leave him for another woman who would be proud of him.

Let me also state that it’s possible to be in love with a man you are not proud of YET, but you can help him to be a man you can admire ONLY IF he’s willing to work on himself, and without ruining your own life.

If he’s not ready to make himself an admirable man, his insecurities will frustrate you.

I’m not sure you want that.

A real man will not let go of a woman who helps him to be a better man.

Don’t be a liability. Be a partner.

Every man wants to be with a woman who is ready to partner with him, who is prepared to help him fulfill his passion, his dreams, and life goals.

A man will be afraid to lose a woman who completes him.

Someone who can help him with things he forgot to remember.

Help him improve and be a better person.

Support him. Be his cheerleader. Cheer him up, cheer him on. Help him achieve his goals (but not at the expense of your dreams).

Because, come to think of it, marriage is about being with someone who completes you.

Someone whose strengths make up for your weaknesses.

Every man wants a woman who will be a Michelle to his Obama.

If you complement him, he won’t want to lose you just as you’d love a man who complements you.

Be fun-loving and fun to be with. Spice up the relationship and be romantic.

Even if the relationship doesn’t lead into marriage, he won’t forget you and these memories.

Let him be happy he is in a relationship with you.

Be yourself, but be an exciting version of yourself.

#10 Love and take care of your body

Take care of yourself and your body. Not for a man, but for yourself.

You don’t need to have a perfect body or be a Kim Kardashian to love and accept your body.

Don’t body-shame yourself. Society is doing a ‘great’ job with that already.

16 Signs He’s in Love With Someone Else

#11 Let him know you are not afraid to quit

When a man knows you are not afraid to leave him if he mistreats you, he’ll not want to lose you, especially if he values you.

Let him know your deal breakers; let him know what you will tolerate and not tolerate.

In conclusion, you can be and do all these, and a man will still not value you.

This is why you shouldn’t be afraid to quit a relationship where you are treated lesser than you deserve.

And while you do, understand that your value doesn’t reduce due to someone’s inability to see your worth. 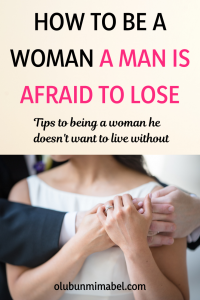 Don’t Miss:
Top Three Mistakes Women Make in Marriage
How to Keep Your Man
5 Things Never to Tell Your Boyfriend

I am so glad that this quotes helped me to be strong coz i distanced myself away from a toxic relationship,whereby i was pregnant and gave birth without my guy's help.but i am so happy and determined.

Awww. You have done well!

That's a good write up. Kudos

A man or a woman doesn't need other party to complete themselves, if they do they are in trouble and they may spend the rest of their lives to find the fit to fill the need. Along comes the advice of following the rules and number of rules can be endless if paired up with people who needs them. Be happy with yourself and try stay that way no matter who walks beside you. Nothing ever stay same in universe, that's why we have our lives - to see it all if we want.

I agree with you that everyone should be whole and not feel incomplete without the other, and this is why I encourage people, women especially, to get a life.

However, we can't deny the fact that life is more enjoyable when you're with someone whose strengths complement your weaknesses because no one has it all.

The point of this article to encourage women to stop living in fear of losing a man. It's okay to love and be loved but not become a slave to it.