Humans are designed to be flawed in one way or another. Nobody is perfect, and you shouldn’t be on the lookout for perfection in a man.

But just because humans are not perfect does not mean you should put up with anything in a relationship.

No perfect relationship exists, but as a woman who desires a healthy relationship, there are some things you should never ignore in a man/relationship.

Take note of how he treats people. Pay attention. Observe. Then, carefully arrive at your conclusion.

It is not only about how a man treats you, how he treats other people is a huge factor you should also take into consideration.

Do you want to know who a man is?

Check how he treats people. You can get a sense of a man’s innermost being and thoughts by his attitude and behaviour towards everyone else apart from himself and you.

Does he talk down to his subordinates? Is he rude to waiters? Is he brash? Is he loyal to his friends? Is he kind to strangers? Committed to his family? How do people describe him and what do they say about him?

Think about these things, and then, make your inferences.

You can ascertain what a man thinks of you by the way he talks to you.

One of the surest ways to judge a man’s feelings towards you is to observe how he tends to the garden of your soul with his words.

How do you feel every time you have a conversation with him? Refreshed? Hopeful? Loved? Demoralized? Tired? Exhausted?

Is he verbally abusive and disrespectful?

Does he build you or break you with his words?

Is he mindful of the way his words affect you?

Does he yell at you?

Does he raise his voice?

Is he kind with his words?

Is he rude to you?

Does he talk down at you?

It takes a lot of time to recover from the damage that the wrong relationship will inflict on you. Why not save your soul the stress and the horror?

One of the worst forms of damage to suffer in a relationship is verbal/emotional abuse.

It strips your soul of its serenity because there is no taking back the words. You keep playing them over and over again, reliving and re-inflicting the hurt.

Is it even worth it?

It starts with the wrong word, then the wrong phrase, to the unacceptable sentence, in an improper tone, a pitch higher and louder than appropriate. Before you know it, you have a tankful of toxicity you have to spend years to flush from your life.

A man is not separate from his opinions. He will not act apart from his views. Be attentive, listen to what he says and what he’s not saying from what he says.

Extract from him his opinions on what he thinks about your gender. Listen to how he talks about the women in his life; his mother, his sister maybe, his female friends if he has any.

How does he talk about the females in his life and what is his relationship with them like?

If he respects women and believes women are to be respected, he will respect you.

When a man shows you his true self especially over and over again, believe him; believe that’s who he is.

Nothing is cute about suffering for the wrong things in the wrong way in a relationship.

How is his relationship with his parents?

Is it cordial? Does he respect his parents? Do they control him or do they respect him?

But if they control him and he does their bidding every time without having a say, then it’s not something to be overlooked.

Does he have a clear-cut drive or vision towards the future?

What are his goals and aspirations?

Is he goal-oriented or he’s laid-back?

If a man has no aspirations for himself, how will be interested in your goals and objectives?

A healthy relationship is one where both parties are interested in each other’s life and helping each other grow.

If you don’t mind having a laid-back man, you can ignore this point.

When people say they are joking when they don’t take caution to what they say, they are often not joking.

Don’t ignore what he says carelessly, they are usually the truth.

I remember an ex who said that a man has no business in the kitchen. He expressed his traditional mentality carelessly, and when I confronted him, he said he was joking.

I knew that couldn’t be a joke, in fact, I didn’t wait to find out if it was.

Don’t get too carried away in a relationship to make light of careless remarks.

In those careless remarks, you find out the true character and intention of the person you’re dealing with.

Beware of a man who judges you for every wrong move you make.

Destructive criticism does not come from a loving spirit. Your soul will be crushed.

There’s a place for loving correction of errors.

Constant and heavy judgment leads to a wounded spirit.

This does not mean a man should turn a blind eye to every error, but it is what’s being said and how it is said.

How does he correct you when you make mistakes?

If you are not comfortable with this attitude, don’t ignore it. Point it out to him.

A man who loves you will make amends.

Be attentive. This does not mean looking out for the wrong things in a man but by paying extra attention and investigating further when anything puts you off.

There is nothing cute about a broken heart. Don’t ignore these red flags in the name of love, attraction or chemistry.

No matter how charming, romantic or hot he is, don’t suspend your sensibility. 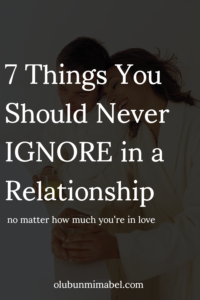