When you’re in love, everything just feels better.

The sun shines a little brighter, the sky is bluer, and life is just generally more enjoyable.

If you’re wondering if your guy is in love with you, here are some signs that he might be.

Keep in mind that not everyone expresses their love in the same way, so don’t get too discouraged if your man doesn’t do everything on this list.

But if he does most of them, it’s definitely a good sign.

So read on to find out signs he is in love with you:

20 Signs He is in Love With You

1. He is always there for you when you need him 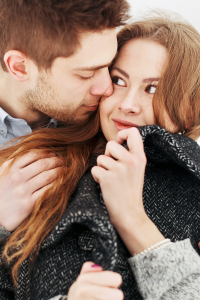 A man who is in love with you will go out of his way to help you, support you, and be there for you.

Even if he has a lot going on already, he’ll still manage to find time to be there for you.

He doesn’t want anything bad to happen to you, and if it does, he gets hurt too.

This is because his happiness is tied to yours.

So if he loves you, he will be there for you when you really need him.

I mean, isn’t this why we get into relationships?

To have people in our lives who can be there for us when we need them.

2. He can’t stop looking at you 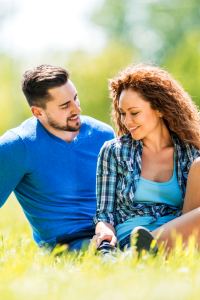 If your man catches himself stealing more than one glance in your direction even if it’s just for a few seconds, it’s obvious that he is really into you.

He can’t take his eyes off of you because he gets mesmerized by your beauty and charm, or even in awe of how much he feels for you.

3. He listens to you and remembers what you say

If your man really loves you, he will remember the little details about you.

If he listens when you talk and makes an effort to get to know things about your life, it shows because he cares for you and wants to be more intimate with you.

4. He is proud of your accomplishments 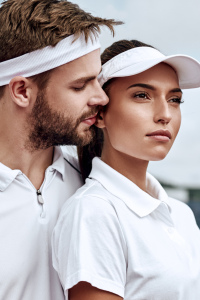 Nothing makes a guy happier than seeing his woman succeed in her endeavors.

Maybe it’s a new job or promotion that has given her more confidence and made her glow with positivity.

When she comes home after succeeding at something and she sees the pride on her man’s face, it just feels so right.

Any man who is not proud of your achievements doesn’t love you.

You can’t convince me otherwise.

Why are you in my life if you can’t be proud of what I work hard to achieve?

4. He makes you a priority in his life

He sets aside time to spend with you because he values your presence in his life, and wants to make sure that nothing ever takes you away from him.

A man who is into you will treat you like you matter.

If this sounds like your guy, it means that he is shamelessly in love with you.

20 Signs He Doesn’t Respect You

How To Make Him Respect You

5. He speaks about spending a future together

When a man really loves a woman, they almost always speak of their future together.

It could just be little things like where they will go next on vacation or how many kids they would like to have one day.

Even if it’s not something big like getting married, they will definitely talk about it.

This means that he is thinking of a possible future with you and sees only good things happening.

So indeed, one of the signs he is in love with you is that he can’t imagine doing life without you.

6. He makes sacrifices for you

When your man loves you, he’ll make sacrifices for you when necessary.

Of course, this doesn’t mean that he stops putting himself first whenever he can (that’s not healthy).

Instead, it means that if something that would benefit the two of you as a couple comes up and involves him letting go of something, then he’d do it without a second thought.

Not everyone has this quality but when your guy does, it definitely means that his feelings for you run deep.

7. He likes introducing you to other people

If your man likes you, he will introduce you to his friends and family.

He’ll be proud of you and what you’ve achieved in life, and wants everyone to know about it.

He will even want to show up with you at certain events because he feels like the luckiest guy on earth when you’re by his side.

A man who is pretending to love you will hide you from people who matter to him.

He will make your relationship a secret.

Don’t let a guy give you the excuse of being  private person.

Private isn’t the same as secret.

8. He is not afraid of commitment

A guy who really loves a woman isn’t afraid of committing himself fully to her.

When a man gets serious about someone, he feels an urge deep inside him that just won’t let go until they are together forever.

He won’t have wandering eyes but will forsake other women to focus on you.

This doesn’t mean he will not find other women attractive.

But he won’t pursue the attraction out of respect and love for you.

9. He shows his affection in front of others 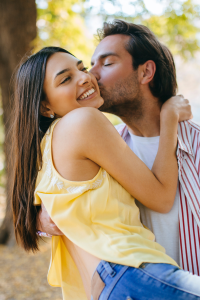 A man who is completely in love with a woman is not afraid of showing her affection in public or when they are with their mutual friends.

If your guy holds your hand, hugs you out of nowhere, kisses you on the forehead or cheeks whenever he can, it means that he feels comfortable expressing himself around other people.

This doesn’t mean a man who doesn’t engage in public displays of affection with you doesn’t love you.

10. He shares personal information with you

It isn’t easy for a guy to open up and let people know what’s going on inside his head and heart (especially if he’s a tough guy).

However, if your man shares personal things about himself with you without being prompted to do so, it means that he trusts you enough to know that you would never use his secrets against him.

Plus, sharing personal information also shows how much he wants to build emotional intimacy with you; which is so much important than physical intimacy.

Physical intimacy without emotional intimacy is one of the reasons men break up with a woman after rolling in the hay with her.

11. He introduces you as the love of his life

You’ve probably heard this before but when someone falls heplessly in love, they usually refer to their significant other as ‘the one’.

If your guy says this about you, then he is completely head over heels for you.

It shows not only how much he wants others to know about your relationship but also how likely it is that he will be with you forever.

18 Signs He Wants to Marry You Someday

7 Signs He Will Never Propose

12. He’s patient with you despite your flaws

What’s perfect is boring and that’s why a man who really loves a woman tries to find the silver lining in every single one of her imperfections.

Your man understands that there is no perfect human.

So, he’s patient with you while you work on your flaws.

You shouldn’t take his love for granted by not working on your weaknesses.

He’s patient with you with the hope that you will work on yourself to become a better person.

You shouldn’t give excuses for your flaws, instead, reward his patience by striving towards being a better person. 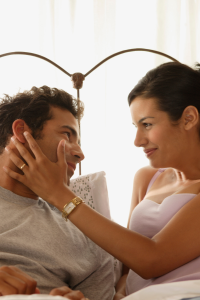 This is where patience comes in.

If your guy loves you, he will know respect your decision to hold off physical intimacy until the right time.

It goes without saying that if your man cannot wait to see you, then he has fallen head over heels in love with you.

This is because when two people are deeply in love, every minute apart feels like an eternity.

Even if your man doesn’t really like to show his feelings, he will be more than willing to let you know how much he misses or cares for you by simply smiling at the sight of you.

15. You can be yourself with him

To have someone who accepts you for who you are deep down is rare, but when it happens, nothing feels better than being able to be yourself with him.

If your man is comfortable and secure enough with his feelings to allow you the pleasure of being yourself, he loves you for real.

16. He’s willing to fight for you/relationship

If he loves you, then he will fight for your relationship — especially when things get hard and rough between the two of you.

If he knows that something is his fault and is willing to own up to it and work on improving upon himself, he cares about your relationship and wants to make it work with you.

17. You can tell him anything without the fear of being judged

If your guy doesn’t mind listening to you vent or sobbing your heart out about anything, he really cares about you.

Trusting him enough to share all your feelings with him without worrying that one day he will use them against you is an indication of how much love you guys have for each other.

18. He advises you when you need it

A great sign that he is in love with you is when he takes the time out to point out something that you’re doing wrong, or could be improved upon.

He’ll let you know if your style needs an update, if your spending or eating habits are not exactly healthy, and even suggest certain ploys that might work better for you.

His advice will help improve your relationship because he wants the best for both of you.

Many of us can tell when a guy is into us.

If he is not, we will have doubts.

If you are convinced (perhaps through his behaviors or these signs) that he loves you, he loves you.

The assurance that a guy loves you is crucial.

Even when he falls short of some standards, you are able to forgive him because you are certain he has true feelings for you.

If your man is in love with you, he’ll probably say those three magic words every lady longs to hear from their man.

Although not every man is good with words, he will find a way to let you know that he loves you.

He may not be able to say it out loud, but there are many other ways he can show it.

If he suddenly starts lavishing you with compliments or doing whatever he can to make your days better, then that’s one sign that his feelings for you run deep.

If you find a guy who is into you, don’t take him for granted.

He might not be perfect but he is perfect for you.

And that’s all that matters. 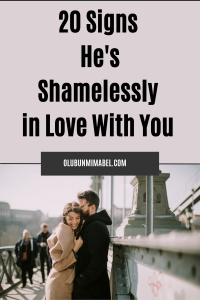