When it comes to relationships, there’s no one right way to do things.

But if you’re looking for how to take things slow in a relationship, and avoid getting too serious too fast, this is the post for you.

There’s a lot of pressure to move quickly in today’s society.

If you’re not married by the time you’re 30, there must be something wrong with you, right?

Well, forget all that nonsense.

If you’re not ready to take things to the next level with your significant other, there’s nothing wrong with that.

In fact, taking things slow may actually be the best thing for your relationship.

When it comes to relationships, slow and steady wins the race.

You don’t want to rush in and get emotionally attached only to have things end badly.

But then, the biggest hurdle in learning how to take things slow in a relationship is figuring out how to find the balance between not moving too fast and not taking too long.

Rushing into love can blind you from seeing red flags and telling signs that things aren’t what they seem.

But, taking too long to move things forward can leave you stuck in a hopeless limbo where nothing ever happens.

You don’t want to be the one who has regrets when you look back at your relationship and think about all of the time that was wasted on something that was going nowhere.

So, how do you take things slow in a relationship without ruining the momentum?

What Does Taking It Slow in a Relationship Mean?

In a nutshell, taking things slow in a relationship means not being too pushy or aggressive with your partner.

It’s about building the relationship up gradually instead of demanding immediate commitment from them.

What Does Taking It Slow in a Relationship Mean to a Guy?

It’s important to understand that guys and girls communicate differently.

Men tend to be less in touch with their emotions than women.

Because of this, they often take longer to relax and open up.

In fact, most of the time they’re pretty clueless when it comes to relationships themselves.

All they know is that they’re having fun with you and don’t want it to end.

For this reason, guys want to take things slow at the beginning of the relationship.

They need more time to feel confident about taking the next step with you before they can commit themselves fully.

If you try to push him into a commitment too early, you’ll only drive him away.

And you don’t want to force it and push him into a corner where he has no choice but to back away.

How To Take Things Slow In A Relationship

There are many things that you can do to take things slow in a relationship without making yourself look needy or desperate.

Below are some tips that you should check out to help guide your way:

If you’ve never been in a serious relationship before, or haven’t had one in a while, it can be difficult to understand the importance of taking things slow.

After all, the beginning is so intense and magical that often times we kind of lose touch with reality and become consumed by our feelings.

It feels like we’re already on top of the world and don’t want it to end.

However, while this is exciting and thrilling, you also need to remind yourself that it’s not real.

Just because you feel so strongly about each other and want to be together doesn’t mean that he or she feels the same way about you.

They may really like you, but they might not enough to actually get into a relationship with you.

Or they may feel that they’re simply not ready for such a commitment yet at this point in time.

Here’s why you should take things slow when getting to know someone:

You want to take it slow so that you can develop trust and comfort within the relationship before anything else happens.

By going slowly, you can make sure that this person is really right for you and that there’s a solid foundation built before things get more serious.

If you push for more than your partner is ready to give, it will only backfire on you.

You’ll end up creating more distance between each other as they pull away.

Even though the beginning of the relationship may be magical, it will start to fizzle out if you try to take your partner by force.

When things are moving slowly at a natural pace, you can both enjoy the ride at a comfortable speed.

In the end, it will lead to a stronger bond between you and your partner.

2. Don’t be afraid to communicate with your partner about taking things slow 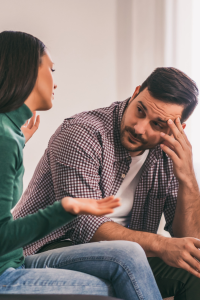 It’s important that you tell your partner what it is that you’re looking for in the relationship.

If they’re not willing to go at the speed that you want, then perhaps they’re not ready to be with you.

Asking questions like “Do you see this going somewhere?” or “What are your intentions?” can help clarify if they really want to take things slow as well.

Sometimes guys aren’t able to express their feelings as much as girls do.

So by asking them specific questions about their thoughts and feelings on taking it slow, it can help open up the lines of communication between each other.

That way, both of you will have a better idea of where each other stands and whether or not there’s potential for the relationship to grow.

3. Recognize that how you act will affect the pace of your relationship

It’s important that you also be mindful about what kind of signals you send him or her when it comes to taking things slow.

Your behavior may not always match up with your words, which can be confusing and is bound to attract unwanted attention.

As you’re talking to your partner about the speed at which the relationship is progressing, keep in mind that your actions are speaking louder than words sometimes.

Sure, they may be okay with moving slowly but if they see that you have no intentions of following along then don’t expect them to stick around either.

4. Remain independent so as not to rush the relationship

While it’s normal to want to spend as much time with your partner as possible, it’s also a good idea to remain independent so as not to rush the relationship.

If you’re constantly hanging out together all of the time, then he or she might get the wrong impression about where the relationship is headed.

They may think that you two are already in an exclusive committed relationship when really you’ve only been on one date.

It’s okay to be friends but make sure they know that there are limits and boundaries between each other until things develop further.

5. Don’t put all your eggs in one basket

When starting out, don’t expect that this person will eventually become your boyfriend or girlfriend.

You don’t know where the relationship might go or if it will lead to anything serious.

Just as you want things to move slowly, your partner may also be looking for something casual and not all serious.

Don’t start making grand plans for the future if they’re unable to reciprocate those feelings.

That would simply create more pressure and anxiety that can easily ruin a budding relationship.

Give yourself time and allow yourself room to breathe and let the relationship grow naturally.

6. Take time for yourself and don’t lose your identity in the process

It’s easy to get so caught up in the relationship that we forget about ourselves and what makes us unique.

When you place all of your energy and focus on taking things slowly with someone else, it can be hard not to lose yourself in the process.

You want them to like you for who you are but how will they ever know if you hide behind a mask?

That’s why it’s important not to lose sight of who you are as an individual.

Remain true to yourself at all times even when dating someone new. 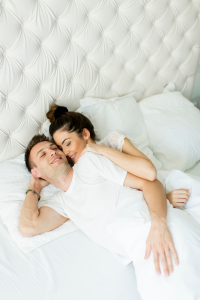 At the end of the day, just know that having s*x will not necessarily lead to a committed relationship.

Yes, you may have s*x with your partner but it doesn’t mean you’re automatically in one.

It’s important to go at an appropriate speed because rushing things too quickly may ruin things.

You don’t want to make yourself seem desperate or insecure which is something that makes men lose interest.

Instead, take things slow and allow them to feel safe and secure in knowing that they’re only having fun without any strings attached.

8. Focus on finding someone who is willing to go at the speed you want

If you’re looking to take things slow but all your partner wants is for the two of you to be in an exclusive committed relationship, then it may not work out between the two of you.

Even though it’s possible to remain friends with someone after ending a romantic relationship, trying to do so if he or she insists on rushing things can be a lot more complicated.

Don’t waste your time on someone who can’t accept you for who you are and what you want out of the relationship.

If they truly care about you and want to be with you, then they would be willing to take things at whatever speed is comfortable for both of you.

9. Utilize your friends and family as a support system 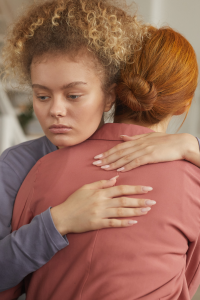 When you’re only taking things slow, it can help to have a support system of friends and family by your side especially during difficult times.

If the two of you ultimately decide not to continue your relationship after all, then they can be there for consolation and help with bouncing back from the breakup.

Your loved ones will understand that even though things didn’t work out, they will most likely still be there for you no matter what happens in the future.

So, do your best not to rush things at the beginning of a new romance so that you can enjoy every moment without feeling pressured into doing something that you’re not ready for.

And if things do start to fizzle out after a slow start, then at least you got to learn more about each other and the kind of people they are before making any irreversible mistakes.

You can’t put a price on true love but you also don’t want to jump the gun and ruin an opportunity because of fear or anxiety. 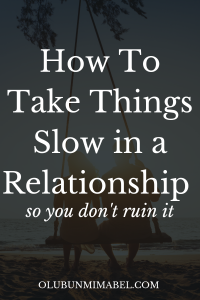