When you first sleep with a guy, there’s always that feeling of uncertainty in the back of your mind.

Perhaps you’re casually dating someone and things are going well until one night you sleep with them and they disappear the next day.

So, what do you do when you think the guy you slept with regrets it?

There are often signs he regrets sleeping with you.

Below are telltale signs that he wishes he’d never gone near you sexually.

11 Signs He Regrets Sleeping With You

1. He’s not calling you back

If he really took a liking to you, then why does it seem like he never wants to hear your voice again?

This may be a sign he’s not interested in seeing you again or he’s really just too busy to call or text.

If the latter is the case, chances are he’ll say something like, “sorry I’ve been so busy” or “I’m sorry but I don’t have much time at the moment”.

But if you’ve tried to call him a few times and he didn’t answer or if he answers but replies in a rude or curt manner, then chances are that he doesn’t want to talk to you.

If this is the case, there’s no point persisting because the more desperate and clingy you become, the more push-away tactics he’ll use.

It’s a vicious cycle that will end with you being ignored completely.

If someone does care about you, they’ll let you know in some way or another (e.g. by taking your calls and actually listening when they speak).

And there are also subtle indicators during conversation.

If they’re properly engaging in the conversation and asking questions, then chances are they’re interested in you – at least enough to make sure that things stay alive between the two of you.

But if you’re messaging them and they just reply with “k” or “yeah okay” every time, then it’s likely that they’re not interested in you.

There’s no incentive for them to go out of their way to maintain the conversation because they’ve already got what they wanted.

If your conversations are dull and monotonous instead of interesting and engaging, chances are he doesn’t care about seeing you again.

Guys who want to call and text will do so regardless of whether they’re feeling the physical connection or not.

So if he isn’t giving you any attention at all, then chances are, he’s trying to forget you even exist.

2. His friends avoid your calls/give fake phone numbers every time you get them

If his entourage is acting weird around you, then there’s probably a reason for their secrecy.

His friends may not be avoiding your phone number out of pity; they could just know that their pal regrets sleeping with you.

They might also not want to get involved in his drama, so they keep their distance.

3. He gives you an excuse about why he can’t see you right now

If he suddenly has “plans” every time you try to arrange a meeting, then something is amiss.

Asking you why you want to meet up with him and giving a vague reason for his behavior is one thing, but creating excuses on the spot isn’t cool.

His awkwardness could be because he’s regretting what happened between you both and wants to put space between the two of you before things get weird.

If he’s not even willing to look at you, then chances are that he doesn’t want to see your face again.

Men who really regret sleeping with you will deliberately avoid eye contact after s*x so they can forget about what happened.

5. He asks you to go back to your place after a night out

The difference between someone who wants to see you again and someone who doesn’t is that the latter will want everything to end as soon as possible after sleeping with you because they don’t want any more connection than necessary.

If he seems like he’s ready for it all to be over after s*x, then chances are, he regrets what happened.

You know the saying: once shame walks in, love walks out.

6. He starts lying about where he’s been or who he’s been with

When a guy doesn’t want to talk to you, the easiest thing to do is lie through his teeth.

He also gets defensive about where he was or who he was with when you text him.

If a guy really wants to see you, there’s no way he’d avoid your texts and start freaking out when you try to contact him.

So if he makes big deals out of simple questions or starts being rude because his whereabouts are none of your business, then chances are, he just wishes he never met up with you.

7. Is fully dressed when you wake up next to him in bed and he’s already making excuses to leave

A guy who wants to leave in the morning won’t care about your feelings if he’s hoping to avoid you.

He’ll take any excuse, even the smallest of problems, so he can bolt before it gets awkward.

8. His body language is closed off around you

When you make eye contact with him, he immediately looks away.

You try to touch his arm or leg but he moves it away like your touching him would be the equivalent of grabbing a hot stove.

If he’s usually open and friendly towards you, but after you guys had s*x the other night, he isn’t as warm or open around you anymore, he might be wishing he shouldn’t have come near you.

9. Your conversations are stilted

Saying something like, “I had fun last night.” results in an unenthusiastic, “Yeah me too.”

Your conversations are stilted because neither of you knows how to broach the topic without it being awkward after sleeping together.

You both know that everything has changed and you’re both afraid that the other one is secretly wishing it never even happened.

10. You feel like he’s holding back from getting closer to you emotionally

Everyone wants to feel like they’re special and different from the rest of the people to their partners.

So, if you sense that he’s not as interested in getting closer emotionally as he is physically, then it can be a red flag that he’s regretting sleeping with you.

It may be because you are just another girl in his long list of conquests or maybe something deeper is going on entirely.

11. He suggests going back to being friends

If he suggests going back to being friends, this means that it’s time for you to move on.

It’s one of the signs he regrets sleeping with you.

If you’ve had the unfortunate experience of sleeping with a guy who immediately regrets it.

Maybe he starts avoiding you or turns cold overnight, you might be wondering what you did wrong.

Don’t worry – there’s nothing wrong with you!

It can be tough to accept the fact that someone may regret sleeping with you, but it’s important to remember that there is nothing wrong with you.

It has nothing to do with your attractiveness or worth as a person.

Cut your losses and move on; there are plenty of other guys out there who will appreciate you for exactly who you are.

Also, develop and commit to values that you’ll be proud of, so you won’t have to experience things like this.

Your values will help you filter out those who have no business being in your life, let alone in bed with you. 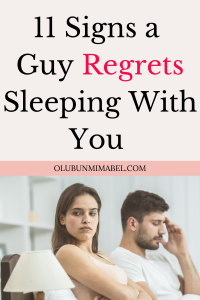