Dishonesty is one major proof that your relationship is way off base.

Lying is a huge turn off for me. As a matter of fact, it’s a big deal-breaker for me.

I can’t stand a lying partner, no matter how good other qualities they have are.

I prefer that you hurt me with the truth and not comfort me with a lie.

Lying says so much about you as a person, not even about me or our relationship. It’s simply a sign of lack of integrity, a serious character flaw.

I’m not saying someone has to be perfect. Sometimes, because we are humans and imperfect, we might lie.

But if lying has become a part of you that I can’t even tell when you’re saying the truth, then I can’t deal.

Because I won’t be able to trust you or commit to you.

How can we plan or work together as a couple if I’m constantly in doubt of the words that come out of your mouth?

While some people have an eagle eye and can detect a lie from afar, some are too trusting and can’t tell when a partner is lying to them.

So, how do you know that your partner is lying to you? What are the signs of dishonesty?

Below are thirteen signs that you’re probably being lied to:

13 Signs Your Partner is Lying to You

1. Their stories don’t add up

When you begin to notice some discrepancies in what your partner tells you, it’s possible you’re being lied to.

You’ll know their stories don’t add up after careful thought because the truth will always add up, no matter what.

The truth is as clear as day.

2. Their body language contradicts what they say

The Bible says, “the righteous are as bold as a lion.” Proverbs 28:1

There’s an unshakeable confidence that you have when you know you’re being truthful.

So, if your partner’s body language doesn’t depict confidence, they might be lying.

If for instance they are unable to make eye contact or they appear uneasy, they might be struggling with telling you the truth.

However, some people are brazen liars. They’ll look into your eyes and tell you a lie.

3. Their stories are not consistent

There can only be one version of the truth but lies have different versions.

They say liars have a short term memory, so they come up with different stories or answers to the same question.

It’s easy to forget your answer if you’re lying but the truth is always constant.

If your partner gives different reports of the same events or if what they said before is not the same as what they’re saying now, such inconsistency might indicate a lie.

If someone is not being truthful to you, they’re likely to avoid giving answers to your questions, avoid talking about the issue or cherry-pick your questions.

They get uncomfortable with being questioned out of fear of being found out.

Lying partners try as much as possible to ensure that the other person doesn’t know what they are up to.

They try to hide things from you to the extent of leaving no traces behind.

You should know you’re being lied to when your partner hoards important details from you.

6. They try too hard to you convince you to believe them

If your partner tries to coax you into believing their story by all means, thus hindering you from examining the logic behind what they say, something might be fishy.

Trying too hard to appeal to your emotions so you can believe them is a red flag.

The truth usually appeals to logic, not emotions.

If they’re being truthful, they won’t have to coax you into believing them because they’re sure of themselves.

7. They become belligerent when you seem doubtful of what they say

If your partner exhibits violent signs because you don’t swallow their story hook, line and sinker, it’s possible the story isn’t credible in the first place.

Liars will always want to shove their lies down your throat but truthful people are confident because they have nothing to hide.

8. They guilt-trip you when you’re doubtful of their words

Apart from being belligerent when you seem not to believe them, a lying partner could guilt-trip you if you don’t swallow their words.

They’ll project their feelings and faults on you and make you feel like the bad person for not believing them.

This is nothing but sheer manipulation and emotional blackmail.

9. They try to hinder your association with others, especially those who might know the truth

Liars try to hinder the smooth flow of your relationship with others.

Because it’s difficult for a dishonest partner to keep lying to you when you have a strong network of friends and family who care about you.

Also, they might try to bad-mouth someone who might be aware of the truth so you don’t have anything to do with them.

10. Their stories contradict those of others

It’s quite impossible for everyone to conspire to lie against your partner.

If you notice that your partner tells a different version of the story from that of most people, you should get suspicious.

But if your partner shows other signs of lying in addition to this, you should dig deeper for the truth.

11. They’re against verification of their words

If your partner wants you to believe them without verifying their words, it’s a red signal.

If they have nothing to hide, they shouldn’t be scared of their words being verified.

Read: 7 Things You Should Never Sacrifice in a Relationship

We usually underestimate the power of our instincts because we don’t always have proofs for why we feel the way we feel.

But if we train ourselves to listen to our instincts, we’ll be saved from many pitfalls.

If you’re not a paranoid person who suspects things even when they’re nonexistent, then your instincts could help you detect if you’re being lied to.

If you feel or think you’re being lied to, that might be the case.

However, this isn’t enough to conclude, it’s just an indication to look out for proofs to confirm what your instinct is telling you.

Read: 40+ Signs That He’s Really in Love With You

If you’re a Christian, you’ll understand that one of the functions of the Holy Spirit is to ‘lead us into all truth’.

Some people are gifted liars, they can lie convincingly and conveniently without giving off any signal.

In this case, you’ll need a supernatural power to detect a lie.

The spirit of God inside of you can help you to discern when you’re being lied to.

This can save you from impending harm and danger.

While just one sign might not be enough to conclude that your partner is lying, a combination of three or more of these signs might be close to it. 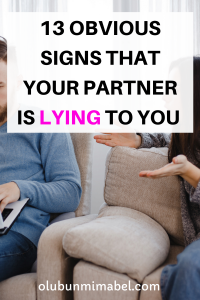