You meet this guy.

Everything is going fine or has the potential to go well until you both hit the bed.

While you think things should get even better, it gets worse instead because he stopped calling and chasing you.

You keep wondering what happened.

1. All he wanted was sex

If a man is serious about being with you, getting physically intimate with you won’t change that.

But for one whose intention is to have some honey and some honey only, losing interest in dating you is just easy peasy.

So, it’s not necessarily you, you not being enough for him, or you giving him some honey.

It’s all about his intention.

How do you know if all he wanted is some honey?

Yes, the signs are always there.

2. You didn’t give enough time for emotional connection

While I said that a man who is serious about being with you will not change his mind even when you both get physically intimate, it’s also worthy to note that if you don’t allow some time to emotionally connect before you physically connect, the latter can get in the way of the former.

There’s so much more to dating someone than what their body has to offer except that is only what you want as well.

Because, think about it, what can your body offer that another cannot?

Yes, the experience may be different but new experiences can always be created and improved upon.

What makes a person different is who they really are – their personality, which is a set of unique qualities that stands you out from others.

When a man knows your real self and falls in love with it, getting you out of his heart will not be a walk in the park.

Emotional connection is stronger than a physical connection, in fact, it’s the former that makes the latter special.

That’s why people say that an emotional affair is stronger than sexual infidelity.

Meaning, anyone can sleep with anyone (casually) without feelings attached, but it’s hard to let go of someone when you have invested your emotions in them (even if you haven’t gotten between the sheets, yet).

It’s how they make you feel, the experience they give you, and the effect they have on you that no one else does, that make you want to be with them.

3. You’re not what he wants

Even though a lot has been said about what men want, the truth is, only a man can tell what he really wants.

So, if he’s not pursuing you after you get physically intimate, perhaps you don’t have what he wants in HIS woman.

This isn’t your fault, it has nothing to do with you, you don’t just have what he wants.

If all you want is a fling, then you don’t have to do anything or feel bad that he loses interest after you got physically intimate.

But if you’re intentional and concerned about who you share your body with; if you can’t separate your feelings from s*x, what then do you do to protect your emotions and be sure you don’t get used?

I suggest the following:

1. Know yourself and what you want

2. Prepare your mind for any eventuality

Do you believe that if all a man wants is your honeypot, and he knows that you want emotional intimacy before getting physically intimate, he may pretend to be in love with you just to get what he wants?

Some can go to that length.

This is to tell you that you can’t use s*x to make a man commit to you.

So, if you eventually decide to get physically intimate after you think emotional intimacy has been established, he’ll still lose interest if he’s not really into you.

3. Be observant and trust your instincts

There are usually signs that a man really loves you and signs that he’s out to use you, you should look out for them because sometimes, women are so blindly in love that they don’t see the handwriting even if it’s boldly written on the wall.

Be careful not to take your heart on a journey without your brain.

Women are blessed with the power of instincts, and those who have trained themselves to use and trust it can tell when something is off.

If you’re in tune with your instincts, it can give you a hint about the intentions and the true character of someone who claims to be in love with you.

4. Set your own rule(s) and don’t give in to pressure

Some relationship experts argue that delaying s*x or not giving in to it at all is not the solution to not getting dumped after s*x.

That instead, a woman should develop other qualities that will make a man want to stay with her.

While I agree that it’s important to develop qualities that make one attractive and irresistible, I won’t deny the place of holding off s*x or even choosing to be celibate if you think that works best for you.

Because come to think of it, it takes time to build an emotional connection which leads to a meaningful relationship.

Getting physically intimate too early can get in the way of establishing an emotional connection.

We live in a hypersexualized world where people equate lust to love. People think they’re in love because of the raging hormones that make them want to eat each other up (no thanks to Hollywood movies).

And when they’ve had enough of each other, and there’s no emotional connection to support what they have/have done, they say they’ve fallen out of love.

The heart is shattered all over the place and the cycle continues.

No wonder true love is hard to find these days because people don’t take time to know each other before knowing what they’ve got down there.

If casual s*x isn’t your thing, don’t do it. Don’t be pressured by societal expectations into doing what you don’t want to do.

A lot of women really desire to be celibate, but they give in because they’re afraid to lose the man.

But if a man isn’t really into you, he’s gonna leave anyway. You can’t keep a man with s*x.

Any man who doesn’t respect your decision to hold off s*x until the right time doesn’t want you for real.

You’ve got to know what works for you and hold on to it.

When this happens, everything else will become magical (if you work on it). 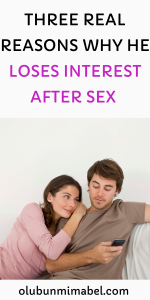 I love ur ideas, they really encouraged me and am grateful to u, at least I know am doing something right. This is a different stuff 4rm what flies around. More Grace

That's so good to know! Thanks for your kind words.