How to respond when he says he needs space…

There’s no way around it: when a guy asks for some space, it hurts.

It hurts bad, and it shakes you to your core.

In these moments, you want nothing more than to make him feel how he’s making you feel.

You want him to ache with longing and want—just as you do.

But what women tend to forget is that men are not wired the same way we are.

And if you know anything about animal behavior, especially male animal behavior, then you know that if this guy hasn’t shown signs of coming around yet, he isn’t going to until he has physical space from you—literally.

So, how do you respond when he says he needs space?

How do you respond gracefully even though you wish otherwise?

How To Respond When He Says He Needs Space

1. Give him some time and space

If he’s asked for some time alone, give him that time to figure things out.

It can be difficult to step back and give someone time so that he can work through his own thoughts and feelings, but it’s the best thing you can do for him.

Go on with your life as usual, and allow him space to do the same without pressure from you.

While it’s tempting to try and contact him repeatedly—even the slightest attempt to resume contact can communicate that you’re desperate.

This adds to his frustration and distracts him further—and ultimately delays the process of getting your ex back.

It won’t be easy, but know that there is a reason behind his request, and he will ultimately come back to you when he is ready.

It’s easy to feel hurt when someone you care about pulls away, especially if you think that something you did contributed to the situation.

But in most cases, it’s not your fault (no matter what he might tell you).

And even if things aren’t going well between the two of you, that doesn’t mean that they’re doomed.

The truth is, everyone needs time apart now and then.

So, if a man says he needs space, he just wants a little bit of time to himself to reflect on what’s going on with him; to figure out his own thoughts and feelings.

He doesn’t mean for you to panic or to worry about it.

Still, it can be tough not to take his request personally, but don’t!

Take a hint, and let him know you understand.

You can even react with some flirty teasing, so as to give him a sense of ease once he knows you aren’t going to be a clingy and desperate mess.

Showing him you understand will help him to alleviate some of the stress and pressure he might be feeling.

He’ll notice, and that’s a great way to show him that you’re there when he’s ready to start talking again.

Showing your understanding gives men confidence that what they’re doing is right.

It also helps them know that they don’t need to worry so much, because they have your love and support.

Together, these things will help your man feel less stressed and more open to talking with you when his time of peace is over.

When someone tells you that they need space, don’t start arguing with them.

Just be polite and let them do what they have to do in order to sort out their feelings.

This is one of the worst things that you can do because it shows desperation and neediness on your part.

And begging won’t change anything anyway.

Ultimately the best thing to do is to continue living your life as if you’re not involved in a romantic relationship.

Doing this will show that you are completely self-sufficientself-sufficient and can live without him in your life, thus sending the message to him that he doesn’t need to worry about you because you will be fine without him.

By staying busy, by having goals, and by working towards them, you become an active participant in your life. You are not merely existing

The best space is the space you create for yourself.

So do things that make you happy

Be open and try new things.

You can use this opportunity to do something for yourself.

Take up a new hobby.

Go for a walk in nature, join an organization to volunteer, join or start a book club, try new recipes or restaurants, try snowboarding, read one of those books that have been waiting on your shelf for ages.

Or spend time outside with friends doing something you enjoy—whether it be going to concerts, hiking trails, or attending some cool festival.

It doesn’t matter what you do to stay busy, so long as it gets your mind off of worrying about him for a bit and puts a smile back on your face.

If your boyfriend is taking some time to figure things out, don’t put any unnecessary pressure on him.

Let him come to his own conclusions and don’t try to rush things along.

By following these tips, you can give your boyfriend the space he needs without losing him altogether. 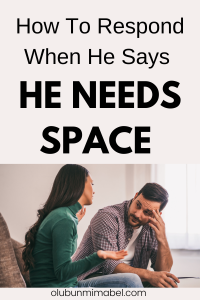