Being a smart woman means you know better, thus, should make better decisions in several aspects of life including relationships.

But this isn’t usually the case as women who are considered smart make some avoidable mistakes while dating.

This doesn’t necessarily mean a smart woman is expected to be perfect.

Anyone can be a fool for love, it doesn’t mean you’re not smart. Plus, we are humans, and imperfections are inherent in humanity.

However, you shouldn’t be a fool forever before you realise it and make choices that are good for you.

What are the common mistakes even smart women make in a relationship?

Here are TEN of them:

1. Letting Yourself Get Dickmatized

You read that right.

If you don’t know what it means to be dickmatized, read it here.

Have you seen some smart women date men that everyone knows are not good for them?

Everyone knows this except the woman (who is expected to know better).

People keep wondering what exactly she sees in him.

Well, it might just be because of a good D!

D so good that you think you’re in love and you’ve reached your final marital destination.

2. Thinking You Know Everything about Men and Dating

But apart from the fact that you can’t be good at everything, you might not be smart enough to make good dating decisions when you are catching feelings for someone.

You’re more likely to be blinded by your feelings, so, you need others who don’t have butterflies in their stomach like you to help you see things the way you’re not seeing them.

Also, thinking that you don’t need to get knowledge on dating from others either by reading books or listening to them is a grave mistake you can make as a smart woman.

3. Falling Too Deeply Too Early

As a smart woman, you can find yourself falling in love too deeply too early especially when the guy is your type.

This can lead to unrequited love if the guy isn’t as into you as you’re into him.

While it’s okay to fall in love when you meet someone you like, you should be sure to be on the same page with him so that you don’t get hurt.

4. Revealing Too Much Too Early

Overexcitement can make you start sharing things you’re not supposed to share too early.

Remember that disclosure in a (new) relationship should be mutual.

When you’re head over heels in love, it’s more difficult to see warning signals even when they’re staring at you in the face.

Smart women sometimes ignore red signals because they’re catching feelings, and it’s even worse when they ignore people who try to make them see what they’re overlooking.

Smart women have values, but some make the mistake of compromising their values because they don’t want to lose a man they’re in love with.

A relationship where you have to compromise your values to be in is not likely to make you happy because you’ll experience cognitive dissonance. 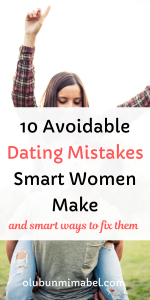 7. Trying to Make Him Ambitious as You

Sometimes, as a smart woman, you may find yourself attracted to a fine man who is laid-back and not as ambitious as you.

Some women don’t care as long as they’re doing well themselves and the men are committed to them.

However, some women want men who are as ambitious as them, so they think they can infuse some ambition into them.

Well, this may work if a man has ambitions but discouraged and only needs some motivation.

But for a man who enjoys being laid-back, you can’t make him as ambitious as you.

8. Letting a Man in and Out of Your Life Many Times

If you don’t stand your ground as a smart woman, you may find yourself letting a man in and out of your life, just like Helen in Sweet Magnolias.

Thankfully, she eventually received some sense and did the needful.

Getting trapped in an on and off relationship will only drive serious-minded men away from you.

9. Thinking You’re too Smart to be Dumped

While you should consider yourself a good catch for a man, thinking you can treat a good man who loves you anyhow because you think he can’t leave you is a serious mistake.

Yes, a man might love you for real but a man who has some self-pride will not let himself be treated like trash all in the name of love.

And some men cherish their peace of mind above anything else, so, if you’re taking away his peace instead of adding to it, he can dump you like a bad habit.

If you’re always taking the initiative in everything, you may end up making him lazy in the relationship, because he’ll get comfortable with you doing it all.

It’s alright to give him suggestions but make sure he’s taking the lead as well.

If you realise you’ve been making any of these mistakes, it’s not too late to correct them and make the choices that are good for you.

That’s what smart women do. 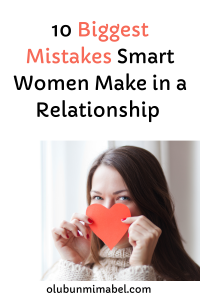 Beautiful write up Olu Mabel. Keep up the good work.

Thank you for sharing.