At different times, depending on the values and principles we hold dear, we may want different things from different relationships.

This is usually not an issue when we are with a man who is on the same page with us; the problem is that this is not always the case. 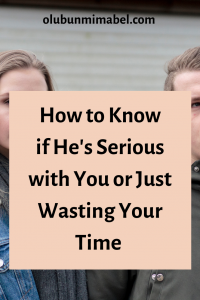 So, how do you know if he is serious with you or a time-waster?

I know this may sound cliché but it couldn’t be further from the truth; if a man wants you, you will know.

Men are natural chasers, especially when they can see the green light. Some men back off if they feel you are not interested but if a man sees a green light and actually wants you, you better believe he will chase you. You will know without any doubt that he wants you.

2. If he doesn’t make you a priority

When someone means the world to you or when you love being around someone, you will automatically make them a priority.

So, if your man is not prioritising you, if he is not going out of his way to make contact, to spend time with you or do something that matters to you, then it just might mean that he is a time-waster.

3. If he wants to keep the relationship a secret

There is something about being in love that makes you want to shout from the rooftop so the world can know you are in love.

While this is definitely over the top, a man in love and with a plan will want to show you off to the people who mean something to him and he will want to meet yours as well.

If he is comfortable keeping the relationship a secret, that is definitely not a good sign of a healthy relationship.

It usually means he doesn’t care about you enough to show you to his loved ones and he is not planning to stick around for long so he doesn’t want to meet your loved ones.

4. If he is dishonest and inconsistent

Really, what further sign can prove that a man is a time-waster than when he is dishonest and inconsistent?

People in love sometimes tell their partners white lies but they are not usually consistently and deliberately deceitful.

It is not healthy if he doesn’t care to be truthful to you or if his stories don’t add up or if he is shifty. Consistently not keeping his word and being truthful is definitely a red flag.

5. If he only wants physical intimacy

It is normal to want to experience physical intimacy with someone you are in love with and that is important.

A time-waster will not want to experience other forms of intimacy with you because that is not what he is there for; he is not there to form any emotional attachments.

Watch out if he is not interested in knowing and understanding you and he is also not ready to divulge information about himself to you as well.

6. If he doesn’t mention you in his future plans

If he is not seeing you in his future, then he definitely will not be making plans that include you in them.

Listen to him when he talks about big plans he has for the future – even small ones – and they don’t include you.

Now, if it is at the beginning, it is probably not much of a problem because you are still just starting and getting to know each other. While some relationships are clear from the start, others are not that clear.

So, in the beginning, it is really not an issue. But after you have been dating for a while and established a structure, if he is not including you in his future, it is probably because he doesn’t plan on you being in his future.

We usually underestimate the insight that people who love us can give on our relationships.

It is possible to have a best friend or two who feel neglected because you got into a new relationship and so, might not really care for your partner – especially in the beginning.

It is impossible for all or most of your friends to dislike your partner for no reason; maybe they can see he is wasting your time or maybe not. Whatever the case, it is worth looking into.

Sometimes, the men actually tell us but we refuse to listen. If he tells you he is not ready for commitment or anything serious, believe him.

At least, in this case, he is honest and making sure you know the scores. If you go ahead when you are not ready to be on the same page with him, you have only yourself to blame. Don’t try to psychoanalyse or give excuses when it has been plainly stated to you.

All these points, in isolation, might not mean that he is a time-waster but if you experience all or more than half of them, there is a serious cause for alarm.

I would advise, however, that you speak to him about any concerns you have before you make any decision because sometimes, there is more than meets the eye.

If after the conversation, you don’t get any valid explanation and you don’t see any effort to change, then you can make a more informed decision. 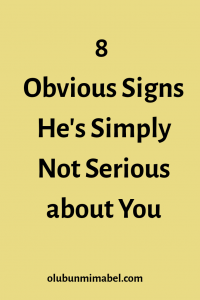