Even though the number of marriages ending up in divorce is on the increase, marriage is still a desirable thing and love is one of the gifts of life.

Perhaps you’re in a relationship and you can’t wait to walk down the aisle with the love of your life.

While this is a beautiful thing, it’s crucial to be sure of some things.

There are many questions you should ask your intending spouse to know each other well and be sure you’re headed towards the same direction.

However, in my few years of dating, marriage, listening to married people, and helping people to deal with marital issues, I realize that one question is most crucial to the success of your marriage.

In fact, this question seems to be the umbrella that houses all other questions.

What kind of marriage do you want?/What is your idea of marriage?/How should a marriage be?/What are your expectations?

In short, it’s simply asking- What Does Marriage Mean to You?

See, one of the mistakes you can ever make is to assume that you and your partner want the same thing, have the same idea about marriage, or have the same marital expectations.

Sometimes, we are so much in love that we forget to put things in perspective until marriage shocks us with realities.

If you desire marriage, definitely you have an idea of the kind of marriage you want or how your marriage should be.

Don’t assume that your partner shares the same thoughts about marriage with you.

That’s why you need to ask this question.

I once dated a guy whose idea of marriage contradicted mine.

He had a rigid traditional mentality, and believed a man shouldn’t have any business in the kitchen. Not only that, he believed women should be controlled and subdued to make them submissive.

I believe in mutual love and mutual respect. We love each other and respect each other. We help each other with the bills and household chores. I believe in partnership.

When I realized we held opposing beliefs about marriage, I told him we couldn’t work. I know what I want my marriage to be like, and he didn’t share that with me.

It was tough letting go especially for him. He even told me that he had changed, that he shared my beliefs about marriage.

But I know that beliefs and opinions die hard.

You can’t change in one day a belief you’ve held for more than 30 years.

I also heard the story of a guy who loved to juice his fruits every morning. He got married, and his dear wife took over the task.

So, one morning, she didn’t juice fruits because she was running late to work.

When this guy got up and didn’t see his juiced fruits as usual, he called his wife and asked her why she didn’t juice fruits that morning.

The wife was taken aback.

“If I didn’t make it, why can’t you? And I wasn’t even doing it for you, I did it because I enjoy the juice as well.”

Even if she did it for him, just one day that she didn’t do it, he had a problem with it.

The guy probably expected that once he gets married, his wife should start babysitting him.

I’m not saying you and your partner will have the same mindset about EVERYTHING. That’s not even possible because you’re two different individuals with unique personalities and experiences.

However, you must agree on core values, your idea of marriage, and know what your deal breakers are.

If you hold opposing views about something and it’s not a deal breaker for you, then it’s fine. It won’t be a problem for you.

For instance, some people believe that couples shouldn’t sleep in separate bedrooms while some believe it’s the best.

Usually, our parents’ marriage influence our mindset about marriage. Consciously or subconsciously, you’ll pick some things from their marriage. Whether is how to or how not to do something.

So, asking your intending partner the kind of marriage they’d like to have will do you a world of good.

It’ll help you to,
. ensure that you’re on the same page
. minimize unpleasant surprises
. know what your deal breakers are
. know your partner better
. negotiate and reach a compromise, if necessary
. make informed decisions

Go ahead, ask your partner this crucial question, and hopefully, you also know what you want, because you could have unrealistic expectations.

Much more than spoken answers, watch out for the unspoken words. They actually speak more volume because humans can pretend and be unpredictable.

If you need to see a counselor or other married people to guide your discussion and decision, do so.

Marriage is a serious business. Your choice could either make or mar you. So, the effort is worth it. 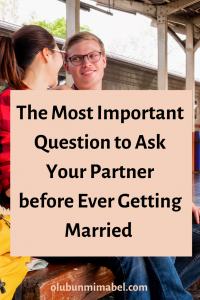 You Might Also Like
How to Make Sex More Fun in Your Marriage Today
Top ten reasons most couples no longer enjoy intimacy.

I love this article. Thank you Mabel

OluMabel, this write-up is so apt and it feels like an essential to checkmate unnecessary and undesirable surprises in relationships. That communication is vital. Thanks.

Exactly, Oset. Thanks for reading.

I just totally love this.

Glad you do, Princess.

This is so apt. Thank you very much

Wao! Truth! Its highly needed to share ones believe,ideas,principle with one's partner before knotting the tie