Do you want to know signs he will marry you someday?

You’ve been dating him for a while now, and you wonder if or when he will pop the question.

Well, there are signs that your boyfriend is hinting at his desire to get married.

You can use these signs to decode what he wants in a relationship and how committed he is.

This article talks about 18 signs that your man will be the one for you, so read on!

If he wants you to meet his family, this could mean that your man is interested in something long-term with you.

He might even be looking at marriage because it means a lot to him and only the special people get invited.

If he always talks about meeting them or bringing you along during holidays (e.g., birthdays), the chances are high that getting married could happen soon.

2. He asks about your plans

Does your man seem interested in what you’re doing for the future?

If so, this may mean he will marry you someday.

This could be a way of him showing his interest and trying to find out whether or not it would work between you two.

He wants to know if you are on the same page and if your plans align.

A man who doesn’t want to marry you will care less about your plans for the future.

3. He’s been distant from other women

If your guy tries avoiding talking or being around any single lady recently, this could be because he is trying to get serious with you and doesn’t want any distractions (i.e., other women) getting in the way.

4. He is happy with you and the relationship

This points to one thing: he wants you in his life forever.

There’s no better feeling than knowing that your partner loves you and enjoys being with you.

Knowing that the man you’re dating will pop the question one day is a great feeling, and if he’s showing any of these signs, it probably means that this will happen someday.

5. He introduces you to friends & family

Your significant other might be more open about showing their affection by introducing you in public gatherings and social settings.

Not only does this show that they’re proud of being with you, but it’s also a sign that they want everyone else to know too!

Introducing you to his friends or colleagues is a sign of commitment.

6. You feel comfortable around him

If there are no awkward tensions or signs of insecurity between you, then chances are good that both of you have been thinking along the same line regarding getting married.

After all, if you are completely comfortable with someone, it is a sign of being able to trust them.

7. He shows interest in your family & friends

If he starts asking questions about the people closest to you and your past relationships, it could be because he wants to know more about you as an individual.

This is also another good indicator for knowing how serious he may be feeling towards marrying you someday.

8. He talks about marriage with his family

When your man brings up the topic of marriage and children around his family, it is a sign he is comfortable talking about your future with you, his family, and friends.

Thus, he might be planning to make an honest woman out of you.

9. You feel very secure in the relationship

You feel very secure in your relationship when you know that this person will never leave but not pressuring you into marrying them soon.

A boyfriend who wants to marry you someday may enjoy spending time with you for a while before making it official.

However, if his actions show signs of trying to lock down an engagement as quickly as possible, then he might have different intentions than simply enjoying each other’s company on a day-by-day basis.

He could be using marriage as a tool rather than something meaningful between two people deeply love where commitment comes naturally over time.

10. He talks about growing old together

If your man is talking about how he wants to grow older with you, then that could mean a lot.

If these talks become more common and serious in nature, then chances are high that marriage will be something on the horizon for you.

11. He talks a lot about family and kids

If your boyfriend seems very eager and excited when discussing having kids with you, then chances are high that he will be looking to get engaged or even marry at some point down the road.

This shows how important family is for him which can indicate marriage too! 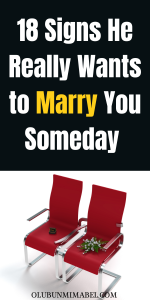 If your man seems like he wants to be closer and intimate with you after dating for some time now, it may mean that he wants something long-term.

These signs include wanting to cuddle or kiss you as much as possible – even if there isn’t anything romantic going on at the moment.

If these things happen often in an appropriate setting (e.g., not when guests are around), then chances are high that he could be hinting at marriage someday soon.

13. He talks about things changing

If your boyfriend seems to think that there is something wrong with the way you two are doing certain things, then this could mean marriage someday.

Since he wants change so badly, he may want to get married soon to have this happen.

If these signs don’t seem negative (e.g., telling you how much better life would be if we were engaged), then chances are high that marriage doesn’t sound too far off for him!

14. He always brings up the positive aspects of marriage

Your boyfriend might be hinting at his desire to get married if he talks about all the benefits of being in a committed relationship.

This includes having someone to talk to when things are difficult or that there is no one else who understands him better than you do.

He may also mention how it’s nice knowing they can come home after work and relax without worrying too much about any responsibilities.

If your boyfriend’s parents treat you like one of their own and make an effort towards getting closer to you, it could mean they approve of him marrying you soon.

This is a sign that you can use to tell if your boyfriend wants to marry you.

16. You can see yourself growing old together

When couples feel like they’ve found their soulmate or best friend who will never leave them during tough times or grow tired of fighting over silly things, they’re likely thinking long term.

When both parties are ready to settle down into married life, they will often envision themselves growing old together.

This is one of the biggest signs that you’re going to get married someday!

17. He gives presents/signs that hint at getting married soon

If your boyfriend has been giving you presents that are both romantic and practical, then it’s a sign that he’ll marry you.

Does your boyfriend give you anything regarding marriage?

For instance, is he giving you personalized chocolates or pens with letterheads saying “Mr & Mrs?”

18. The way he looks at you is different than the way other men look at women

The way he looks at you is similar to the way Superman looks at Lois Lane.

He’s always looking at your eyes when talking with you so that it feels like he really cares about what you have to say.

His face lights up whenever his gaze meets yours and this makes him look more attractive than usual.

You can feel a spark between both of your gazes meeting each other every time they do, which creates an instant connection between the two of you.

If any of these above signs sound familiar with your boyfriend, then you might be headed towards a future of marriage.

However, don’t hesitate to have ‘the talk’ with him if you feel like he’s wasting your time.

Don’t forget—it is your life.

Make a decision you think will benefit your life. 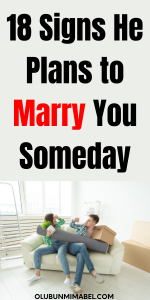