Have you ever wondered why there is so much talk about femininity?

It is because there is something beautiful about being a woman.

Some people are even against feminism because they believe feminism prevents women from being feminine.

That might be stretching things though because sometimes, the idea of being a woman is not allowed by society to be determined by the woman in question but by society itself.

However, every woman cannot deny that there is something about being a woman and it will be a shame not to acknowledge or use it to your advantage.

There is so much power attached to being a woman that it will be a shame not to explore it.

What are these powers women possess that you have not recognised, acknowledged or been missing out on?

Below are 5 powers you have as a woman to use to your advantage :

Women have been taught to be soft-spoken and without sounding stereotypical, most women are indeed soft-spoken but that doesn’t mean we should use it as an excuse not to make our voices heard.

Quite unfairly, the world doesn’t expect so much from women that when we do speak and speak confidently, they stop and listen.

It is quite ironic but that is the way the world works because in some societies, women are expected to be seen and not heard.

The person from whom much isn’t expected can command a lot of respect when they demand it unlike the one who is already expected to do a lot.

Women need to stop cowering and start speaking up; we have a verbal power that we have not been utilising and it is definitely time to do that.

There’s power in your words as an individual, and this power is more profound in women.

As a woman, the words you speak can either build up or tear down.

In his bestseller, Gifted Hands, Ben Carson emphasised how his mom’s words transformed his life.

He was tagged the dummy of the class in his fifth grade. Of course, a dummy couldn’t have made the medical history that he made.

Apart from not letting him and his brother watch TV and play outside except they were done with their homework, his mom would always say to him, “You can be anything that you want to be. You can achieve anything you set your mind on.”

These words went a long way to help him rise above his academic challenge and become the great man that he is today.

Growing up, and even now, I take my mom’s words seriously. Her words influence me in a way I can’t explain.

Dear woman, don’t ever underestimate the power of your words to yourself, to your man, and especially to your children (if you have them).

A lady shared with me how she didn’t study Nursing like she desired because her mom constantly told her she was dumb and didn’t have the brain for it.

What words do you say to yourself?

Do you build yourself up with your words or you tear yourself down?

What do you say to your man?

Do your words encourage him or they are like a dagger that pierces his soul?

Always remember that you have the power of words and you can use it for (your own) good.

Examples of Positive Things to Say to Yourself

I can do it

I deserve every good thing that comes my way

I am not perfect but I love myself regardless

I am not my mistakes

My failures do not define me

Humans, generally, have great intuition but that of women is more heightened because we have been encouraged to use it while men were encouraged to lose it because it doesn’t seem masculine; they’d rather be led by logic.

A woman’s intuition has been so practised over the years that we just know some things.

We cannot explain why we know, we cannot even rationalise why we think it should be so but we just know and we are often right.

Our intuition is something I really love about women and I think we should use it more.

More often than not, women ignore that knowing in their gut that something is right or wrong because it cannot be explained.

But some of the best things in life cannot be explained or did not “make sense” at first, so sometimes, logic is overrated.

It doesn’t mean we shouldn’t still look at situations critically, it just means that when you feel strongly about something, don’t ignore it.

At the very least, investigate; maybe there is a reason you feel the way you do.

“Beauty with brains” sounds like a compliment but it is a backhanded compliment that suggests that women with brains are rare, so you having one is special.

But that couldn’t be further from the truth.

From history, we can deduce that women would have done more if society wasn’t wired to favour the men and put them in a position of leadership.

We have seen that women are, in fact, intelligent, when they get a place on the table.

As a woman, the worst thing we can do to ourselves is to believe what society has fed us with because a lot of women actually do not put in their best because they have been taught to settle for less.

But we have this power, so we might as well use it.

We have to live up to our potentials; it cannot be overemphasised. You have it already anyway, all you have to do is live up to it.

This point is quite controversial and some people might raise an eyebrow at using the power of our beauty.

Sometimes, what will open the door and give you a seat at the table is you taking advantage of your beauty, so why not use it?

It is a ‘survival of the fittest’ world out there and everyone is looking for an edge.

If the advantage you have includes your beauty, you should take advantage of it.

You shouldn’t have to tone down your beauty to make anybody comfortable; it’s yours to appreciate and acknowledge.

Women who are pleasing to the eyes are likely to get more opportunities because, hey, who doesn’t love a pretty face?

People, men especially, can hardly resist a pretty woman with a smile.

While some women are blessed with natural beauty, every woman has the potential to be pretty when they engage in these beauty habits.

So, don’t ever feel guilty if your beauty gives you an edge over others. Don’t be ashamed of your privilege.

We are differently privileged, and for a reason.

Women are very influential; we can make things happen because of how amazingly subtle we can be.

The ego of men prevents them from being subtle; they usually want to take on things head-on that is actually one of their weaknesses.

Women, on the other hand, can be really subtle and we should not despise it but use it more.

You can make anybody do what you want and make them think it was their idea in the first place.

Also, a man’s love is a weapon in the hands of a woman.

When a man is in love with you, you can influence him to do almost anything except the man can stand his ground.

I’m a Christian and I see many examples of this in the Bible – Adam and Eve, Abraham and Sarah, Samson and Delilah etc.

These women got their men to do their bidding even though there were grave consequences attached.

If you need to get things done, use your influence (positively) and it is only a matter of time before it gets done.

The world really doesn’t care; it is a ‘dog-eat-dog’ environment out there and that is why we should not be shy or even hesitant to use our power.

Men unapologetically use their privilege to get ahead. There is nothing wrong in doing the same as far as nobody is getting hurt in the process. 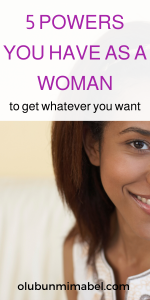 *This article contains an affiliate link, which means I earn a commission when you make a purchase at no extra cost to you*