You would think that every lady who is in a relationship would be excited to say ‘yes’ when her man pops the question.

But this isn’t always the case.

While men have reasons why they haven’t proposed to their women yet, women also have reasons for turning down their men’s proposals.

These are the usually the top ten reasons women turn down marriage proposals:

It’s not just men who love to take their time before taking a relationship to the next level. Some women don’t want to be rushed as well.

Timing is different for every lady.

What is considered too soon for a lady might be too late for another.

Trust me, a lady might love you with the whole of her being, yet, turn down your proposal because she’s scared of marriage.
The fear of marriage, gametophobia, is so real for many ladies and could be due to the many failed/unhappy marriages they’ve seen – their parents’, friends, siblings, or in tabloids.

4. They want you to fix some things

A lady who loves you may turn down your proposal because she wants you to fix some things in your life e.g overcome an addiction, have a plan for your life, get a job etc.

5. You haven’t talked about it

Not every lady likes a surprise marriage proposal.
If you haven’t had the marriage talk with her, she might turn you down.

6. She wants to work on herself

If a lady is dealing with issues (addictions, past hurts, insecurities, lack of trust, fears etc) that could make a marriage problematic, she might turn down a proposal just to sort herself out first.

Some women don’t just want to get married. They prefer to be in a relationship without the commitment of marriage.

A lady who doesn’t want to get married is likely to turn down a proposal.

8. She doesn’t want to get married to you

Just because a lady is dating you doesn’t mean she wants to be married to you.

If this is the case, she might turn down your proposal.

9. She doesn’t deserve you

If a lady feels you deserve better or she feels unworthy of you for whatever reason, she might turn down your proposal.

A lady might turn down your proposal if she’s yet to meet her career or financial goals.

These are usually the reasons a lady might turn down a marriage proposal.

That is why it’s important to do these five things before ever proposing to a woman.

What happens after a woman turns down a proposal? Is the relationship over?

I think it’s important to talk about it and find out the very reason for the refusal, after which you can make your decision. 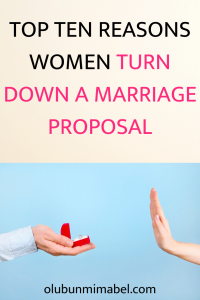