“He stopped talking to me but likes my pictures”.

What could make you say that?

What could make him do that?

So, things might have been going well between both of you… At least, to the best of your knowledge.

You were thinking that you were on the path to a long-term fulfilling relationship.

And then, he ghosts you, disappearing into the thin air without even as much as a warning.

After what seems like an eternity, he is back in your life.

This time around, he’s not talking to you or doing anything like that.

He is on your social media pages liking your pictures.

And it’s strange to you.

It should be strange to you.

Want to know what’s up with him?

There are reasons behind this attitude of his and we’re going to be looking at some of them in the course of this article.

Outlined below are some of the reasons why he disappeared from your life, showed up all of a sudden and is all over your social media pages.

He Stopped Talking To Me But Likes My Pictures: 10 Reasons Why

1. He Wants To Know If You Have Moved On From Him

Since both of you are still listed as friends on Facebook and probably still following each other on Twitter and Instagram, he decided to check your profiles out.

He will love to know how you’re doing, even without having to talk with you.

He wants to know what you have been up to while he was gone, and most importantly if you’re seeing someone else now.

And seeing that you’re still single, he liked your pictures.

So, he thinks that since you’re still single, there is always hope for both of you to do some catching up.

2. He Simply Does Not Want To Lose Touch With You

If you say, “he stopped talking to me but likes my pictures”, here is a possible reason.

Just maybe, he is hoping that by reacting to your pictures on social media, he can create a lasting impression on you.

That way, he’ll stay in your heart and mind for a long time.

And if he succeeds in doing that, he is assured of a chance to date you in the future. 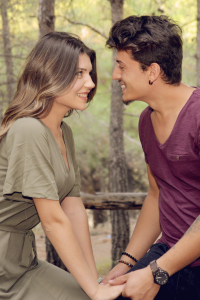 Was he expecting you to wallow and drown in self-pity forever just because he left you without as much as an explanation?

So, when he checks you out on your social media pages, he sees that you’re glowing, bubbly and happy.

He can’t help but reminisce on the times both of you were together and how happy those moments were.

In his nostalgia, he goes through most, if not all of your posts.

But this might not necessarily mean that he wants to get back together with you.

If it were to be so, then he should know that he has a lot more to do than just liking pictures on Facebook and Instagram.

4. The Awkwardness Of The Whole Situation Is Overwhelming Him

He knows that he messed up big time, but then, the situation is already awkward enough for him to add more awkwardness by trying to reach out to you.

There’s always the option of calling you to say “hi” and check up on you, but it feels so awkward to him especially if he suspects that you’ll hang up on him when you realize he’s the one on the other end line.

And then, he figures that hiding behind his keypad to drop likes on your pictures will be a subtle way of saying “hi” to you.

This is also his smart way of checking the level of temper flares between the two of you.

If you don’t reach out to him after his antics or like his pictures back, he’ll take it that you’ve moved on with your life.

So, this is one of the answers to your wondering why “he stopped talking to me but likes my pictures”.

5. He Wants You To Remain One Of His Options 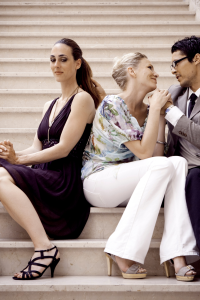 The fact that he reacted to your beautiful pictures online doesn’t mean that he misses you and needs you to give him a second chance.

He probably wants you to think that he is still interested in you when all he wants is to make you one of his options.

This way, if you think that he’s still interested in him, you’ll leave the door to your heart open and accept him back easily whenever he’s bored and needs to play around with your heart.

6. He Feels Guilty About His Actions 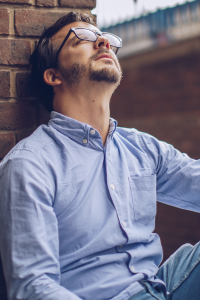 Just maybe, all his prancing about your social media pages and liking your pictures all boil down to him feeling guilty for what he did to you.

And it gets worse for him especially when he realizes that he lost an amazing woman due to his nonchalant attitude.

I don’t think you should feel sorry for him.

If he thinks that reacting to your pictures on social media is enough to amend what he did to you, then he is a big jerk.

7. He Just Doesn’t Want To Put In Efforts To Getting You Back

One word for this kind of guy – lazy.

He does not want to put in a lot of effort.

And this may not be far from why he disappeared the first time; he was running away from responsibilities.

And now, he’s blowing up your phone with notifications from liking your pictures on your social media pages.

What happened to make a real effort like calling you to have an actual conversation about what happened?

Can’t he text you or at least go out of his way just this one time to put in an effort into getting you back?

8. He Is Just Leading You On

When you say, “he stopped talking to me but likes my pictures”, two things are involved.

It’s either he is serious about getting back together with you, or he’s not.

In this case, he is not into you.

He just wants you to think that he is.

He feels that he can waltz back into your life whenever he feels like and you’ll receive him with open arms.

Sometimes, all this show-off is for his ego.

He gives you mixed signals; coming into your life and suddenly ghosting you because he wants to satisfy himself that he can get you whenever he wants.

9. He Needs Your Attention

Most times, we assume that someone who goes on a liking spree on your social media pages wants to shower you with all the attention he can lay his hands on.

But sometimes, the reverse is the case as it can just be about him.

He is the one who needs the attention.

A bit about this scope is that you’ll want to reach out to his friends, tell them of the latest incident with him and be curious to know what’s going on with him.

By doing this, he wants to know if you still care about him.

It’s not about you.

If you’re saying, “he stopped talking to me but likes my pictures”, it may not be anything serious.

Perhaps, he’s just liking the posts of everyone that pops up on his page.

A sure way to not jump to conclusions is by checking out the pages of some of his friends to know if he’s also liking their posts and pictures.

Sometimes, it’s just a ‘like’ and doesn’t have to mean anything more than that.

If you feel that it is much of a bother to you, go ahead and block him.

After all, he deserves it for ghosting you. 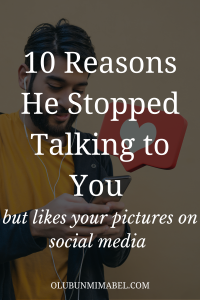