Being in a healthy relationship doesn’t mean you won’t get hurt by your partner.

This is one of the most common misconceptions about people in happy relationships – that they never get hurt.

And it’s a wrong notion.

Some little things that your partner does could hurt you along the line and although they might be unintentional on his part, you’ll still get hurt by their actions.

People who have broken up their relationships do so out of a place of hurt, sometimes.

As a lady, you might be the one hurting and if he still has his emotions all over the place, he won’t see any cause to regret his actions… Yet.

If he’s mature emotionally, rest assured that he feels guilty for his actions towards you and is sorry for hurting you.

When he realizes how much he has hurt you, the guilt hits him squarely in the face and he begins to look for ways to right his wrongs.

There are clear signs that he’s aware of the effects of his actions on you.

I’m going to be taking you through the most obvious signs.

Make sure you read to the end.

8 Signs He Knows He Hurt You

1. He Showers You With Gifts 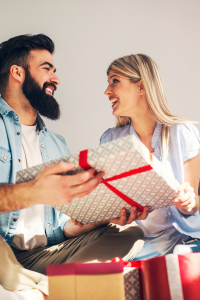 Showering you with gifts is one of the biggest signs he knows he hurt you.

He does this as a way to make up for the bad way he treated you.

When he does this, he feels guilty for hurting you.

It’s possible that he’s a changed person and wants to come back for good.

However, this is a dicey case.

While you don’t reject his good gesture, be on the lookout that the ugly incident doesn’t repeat itself.

He might feel guilty about his actions and buy you a ton of gifts to make up for it, but that won’t take the problem away.

Be sure that he’s truly changed to avoid hurting yourself in the same manner all over again.

2. He Seeks Ways To Talk To You 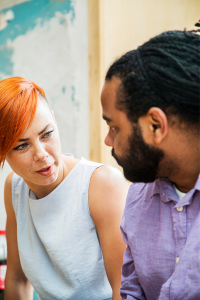 When he looks for ways to reach you and tender his apologies over his behavior towards you, it’s a good sign he knows he hurt you.

Be mindful that he’s not repeating the same mistake over and over again while showering you with sweet words to make up for how he treated you.

Is true that the guilt of what he did to you is eating away at him, but is he willing to change?

The reason why it seems he’s unable to stop calling or texting you is that he regrets hurting you and invariably, losing you.

He does all he can to loosen the tension between the both of you.

When he checks up on you to know how you’re doing, he’s trying to make you feel better because that makes him feel better too.

You’ll be surprised at how quickly he replies to you and how he’s able to hold long conversations with you.

This doesn’t happen before, right?

Well, he’s feeling guilty for hurting you and wants to make it up to you.

You’ll even notice that he asks silly questions and makes weird suggestions in the course of your chats with him.

He does all of these to keep the communication line open and flowing between you two.

You mean so much to him and he misses you a lot.

He’s keeping in touch with you because he doesn’t want the bond you both share to diminish.

3. He Says You Deserve A Better Man

He can also choose to relieve himself of the guilt by moving the spotlight to you.

You might hear him say that you deserve a better man or that he’s not good enough for you.

You wouldn’t have gone into a relationship with him in the first place if that were to be the case, innit?

You know he’s lying through his teeth, but this is the best way he can come up with to free himself of the guilt.

When he’s finding it difficult to accept that he messed up, his next logical line of action will be to divert the attention to you.

He can even go as far as buying you gifts and telling you how he doesn’t deserve you, that you’re too good for him.

It’s the guilt talking. It’s one of the signs he knows he hurt you and it’s dealing with him.

4. He Apologizes To You Sincerely 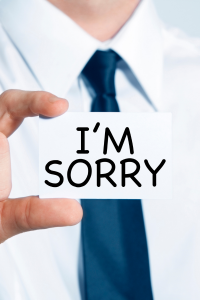 When he reaches out to you with a long text about how he’s sorry for hurting you, there are high chances that he means every word he’s saying.

If I can recall, you both once shared a romantic bond and it’s not unusual for him to let you in on his emotions.

That’s why he’ll reach out to you and apologize for hurting you.

Even if this might take some time to happen after you both go your separate ways, know that it is coming from a place of honesty, remorse, and regret.

You’ll sense how sorry, broken, and frustrated he is for hurting your feelings.

5. He Avoids You In Every Possible Way

Due to the guilt that has been eating him up, he finds it difficult to face you.

He can’t stand seeing you hurt and he’s so ashamed of his actions that he can’t look you in the eye.

Not replying to your texts, chats, and phone calls will become some of his escape from reality.

You’ll know if he’s avoiding you deliberately, and this can only be because he knows he hurt you.

6. He Becomes More Quiet Than Usual

Even if there are topics they avoid talking about, there are others they can go on and on about for hours on end.

So, if he suddenly becomes withdrawn and talks lesser, it could be one of the signs he knows he hurt you.

This might not be just around you, but around your mutual friends and other people as well.

While being this way physically, he might be loud online about how he’s living his best life.

Do not be deceived.

You of all people know him better and should see through the facade.

Men are usually very good at suppressing their emotions and hiding away how they feel from the rest of the world.

You should see through his acts and know that he’s doing all of that because he knows he hurt you.

His smiles are shallow and he tries too hard to convince other people that he’s in a happy place.

The truth is that he has realized that he hurt you and doesn’t know how to reach out to you.

7. He Shows Up In Things That Concern You

Does he begin to show up all of a sudden in places where you can usually be found?

Perhaps, he shows up at a function where he’s not invited simply because you’re there.

He suddenly begins to take interest in your life and circle of friends and tries to get involved in anything that concerns you.

This is simply because he has realized his mistakes.

Sometimes, it’s not a coincidence that he suddenly appears at a restaurant where you’re hanging out, or you bump into him at the mall or he shows up in front of your home or office.

It’s his way of dealing with the fact that he hurt you, and it’s up to you to decide whether it’s creepy or cute.

You were with this man for some time, he knows you too well and knows how to win your love back.

Even if he doesn’t move the world for you, you’ll see a change in his actions towards you to let you know that he has realized his mistakes.

Doing these things show that he’s remorseful and wants you back in his life.

It’s among the signs he knows he hurt you.

No relationship is without problems and no one is perfect.

It all depends on your ability to tolerate, overlook and compromise.

If he realizes that he hurt you and sets his ego aside to do better and be better by you, it’s a welcome development.

You’ll notice that he’s changed for the better and does things differently.

He’ll also try to fix things between the two of you and possibly get you to come back to him. 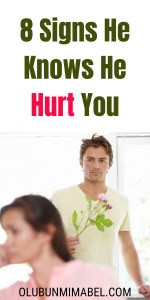