When a relationship is still new, everyone tries so hard to be on their best behavior to appear perfect and impress the person they are trying to be in a relationship with.

However, when the flames of the intense interest begin to fade away, things begin to take a nosedive.

One of the signs he doesn’t value you anymore is if he starts disrespecting you.

Whenever you find yourself wondering if he still has some respect for you, I think that the level of value he placed on you is diminishing.

Whether intentional or unintentional, there will be telltale signs he doesn’t value you anymore and does not see you as important to him.

You’ll catch yourself thinking about why you can’t make him happy all of a sudden in the relationship if there was once mutual respect between the both of you.

I’m going to be talking about some of the signs he doesn’t value you anymore, in the course of this article.

Look out for them if you are having doubts about your relationship.

That way, you won’t have to guess for long before knowing what the real problem is.

7 Signs He Doesn’t Value You

1. He Is Not Interested In What Makes You Happy 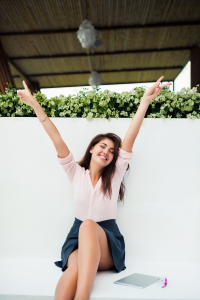 It might be possible that he compels you to engage in activities that make him happy every weekend.

Your suggestions are not welcomed.

Red flags you should look out for include his not being interested in knowing what your values, your interests, and your specialties are.

If he’s always demanding your full attention while engaging you in his interests, he doesn’t see you as an equal.

Perhaps, he sees your being in the relationship with him as a means to achieving the things he holds dear.

2. He Takes You For Granted

To him, your feelings don’t matter as much as his.

At the top of the list, second, third, and so on are his needs; yours are not on the list.

Whether you are in the mood or not, you are expected to put up a smiling face and act happy.

He disappears whenever you need his support but even forcefully leans on your shoulder whether it’s suitable for you or not.

Being inconsiderate towards you is his watchword.

One of the signs he doesn’t value you is if he just goes on to assume that you’ll always be there for him despite whatever you might be going through.

If he’s unappreciative of you and doesn’t reciprocate your efforts to make him happy or make the relationship work, he’s taking you for granted, and it’s a clear sign he doesn’t value you.

3. He Puts You Down In The Presence Of Other People

Because a couple has similar or the same values, one of the basic things they do is to act as one.

They do things together and share a respect for each other mutually both in private and in public.

One way of breaking some of the unspoken codes of a relationship is mocking or belittling your partner in the presence of other people.

It shouldn’t be done at all even – in public and in private, because it is very disrespectful to the recipient.

If your partner begins to put you down not only when it’s just the both of you, but in the presence of other people, it’s one of the signs he doesn’t value you.

4. He Does Not Listen To You 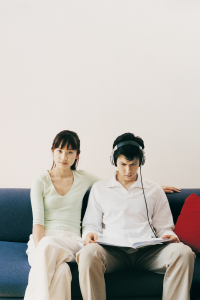 In this case, he always makes the decisions.

Whether you like it or not, he shoves his opinions and thoughts down your throat, and yours are considered inconsequential.

He zones out on you when you are talking about anything that concerns you.

You might have to sit him down and talk to him if you find out that he is just cruising through the relationship without being in touch with your feelings.

This is one of the signs he doesn’t value you.

5. He Doesn’t Take You Seriously

Still looking for signs he doesn’t value you?

He shoves your hurt and pain aside like they don’t count?

Refusing to treat his shortcomings towards you seriously whenever you complain about them to him?

Perhaps saying that you act like a child when you talk about your needs?

These are all glaring red flags.

Whenever he makes a mistake, rather than acknowledge it, he finds a way to conveniently turn it around and pin it on you.

If you are going through all of these in your relationship, I don’t think that guy values you anymore.

6. He Is Nonchalant About Your Dealings With Other Guys 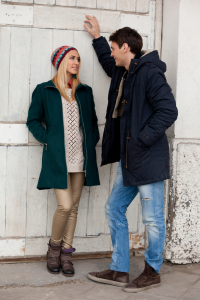 While nobody wants to deal with a guy who is too snoopy, overprotective, and jealous, it is also weird when you are in a relationship with a guy who doesn’t care about what you do with other guys.

You can see and even flirt with other guys and he won’t bat an eyelid.

I’m aware of open relationships and if that’s the case here, I understand his stance.

But if you’re in a committed relationship with this guy and he turns a closed eye to your dealings with other guys, it is one of the biggest signs he doesn’t value you.

7. He Plays Mind Games On You

One of the most glaring signs he doesn’t value you and of course, one of the ugliest, is if he plays mind games on you.

Generally, some people are passive-aggressive.

At one point, they are harmless angels who can turn into terrifying demons at other points.

It seems they set you up on high just to leave you and derive the pleasure of watching you hit rock bottom.

And the cycle continues.

You are in a sticky situation if he keeps challenging you to leave him.

He can even go as far as using the blackmail tactic on you.

This guy may have a good side that you’ve fallen for, but then, this vindictive and petty side of him that’s constantly playing games with your mind is not good for your mental health. 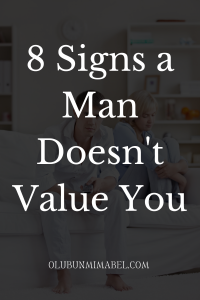 8. He Doesn’t Reciprocate Your Gestures and Efforts

If someone values you, they will not only appreciate whatever you do for them and what you do to make the relationship work, they will also reciprocate your efforts.

A man who doesn’t value you will ignore your calls and texts,  never buys you a single gift even if you buy him gifts every time.

He does not care about the effects his actions have on you because he doesn’t value you.

He also doesn’t care if he loses you.

You’ll value someone you don’t want to lose.

If you notice these things, they are signs a man doesn’t value you.

What Do You Do When You Notice Signs He Doesn’t Value You?

I believe you’re an adult who knows what she wants in a man and relationship.

If you don’t like the way a man treats you, point his attention to it and observe his response and behavior afterward.

If he apologizes and shows remorse, give him the benefit of the doubt and see if he’ll turn a new leaf.

If he doesn’t, the ball is in your court—remain in the relationship and endure not being valued or quit the relationship, heal, and wait to be with someone who knows and appreciates your worth.

Remember, you deserve to be loved and valued. 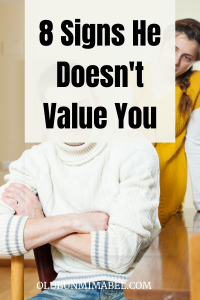