Conflicts are normal occurrences in every relationship/marriage. Conflicts cannot be prevented, they can only be managed.

One of the ways to manage conflicts is not to say things that could hurt your partner in ways that will do irreparable damage to your relationship.

Conflicts will come and go, but words spoken during conflicts (even if you didn’t mean them) could linger for long, and even lead to the end of a relationship.

I learnt this the hard way, and I shared my story here.

It is usually hard to set things right after saying mean and hurtful things to each other during a fight.

It is better you do not say something you’d later regret because the temptation is always there to hit below the belt just to score cheap points during an argument.

Below are 8 things you should never say to your spouse during a quarrel.

8 Things Never to Say to Your Partner During a Quarrel

1. Saying things about their looks

You have always loved their looks, why do you suddenly have issues with it now?

Hardly will they ever trust your opinions about them again.

Words like ugly, horrible, fat, unattractive, unappealing etc. aren’t nice words to use for your partner no matter how angry you are.

They will believe you’ve always had this in mind and you just had the chance to spew.

Using your partner’s sexual problem to hurt them will never leave your marriage the same. 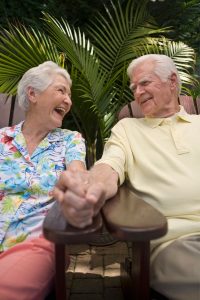 The argument is between you two, there’s no need to bring their parents into it. Don’t badmouth their parents.

It not only shows you have no regard whatsoever for them, but it also shows you don’t have respect for your own parents as well.

Because if you insult your partner’s parents, you’re likely to get the same treatment.

If don’t want your parents to be insulted, don’t insult someone else’s parents.

4. Pasts they shared with you

Do not begin to dig up past experiences and secrets they shared with you.

Help their past to remain in the past.

If you use their pasts to score points, they’d be hurt and would probably never trust you enough to share secrets or even vital information with you.

You should be able to keep a secret, no matter how angry you are.

Don’t mock them with their struggles and problems.

Everyone is trying to make their lives better in some way. Don’t make it harder for them or make them feel like they ain’t trying their best. 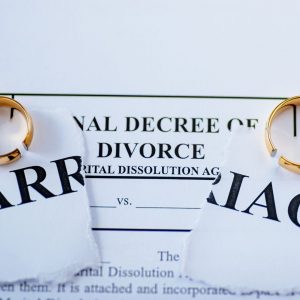 Don’t be quick to use the “D” word if you don’t really want it.

Threatening your spouse with divorce shows a lack of regard for your union.

If you don’t want a divorce, don’t mention it.

We are likely to call our partner names when emotions are running high, but doing that will only leave a bad taste in our mouth.

Resist the temptation to call your partner names, because they might never forget those names you called them, even if you didn’t mean them.

No spouse would be happy seeing their partner talk about another person’s spouse just to make them feel like someone else is doing better than them.

Don’t do the comparison thing, focus on your spouse and the issue at hand.

Don’t you ever wish someone else’s spouse was your spouse because so many things happen behind closed doors that we don’t know about.

Always remember that words are like eggs, once broken, can never be retrieved.

Conflicts are easier to resolve when hurtful words are not said. It’s better to walk away from an argument scene than to say something you’ll forever regret. 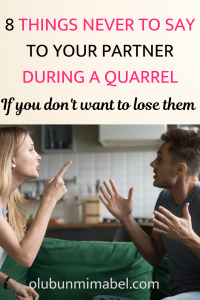 Articles You Might Also Like
How to Make Sex More Fun in Your Marriage Today
Top ten reasons most couples no longer enjoy intimacy.

This is a very informative write-up. I'm glad I read it. Thank you for putting it out.

Thank you for reading, Amaka.

Awesome tips. Thanks so much

Thanks for reading, Princess

You've got a great write-up ma'am. And I must commend you for this. Every point is vital and worth applying for a healthy relationship. Although, I'm not married yet but I hope to apply these tips when I get married. Please, I need your blessing on my blog too. Just a comment from you will gladden my heart. It's tundekorede.com

Thanks for your kind words. I'll check out your blog.

Thank you for sharing this vital points. If only people will control what comes out of their mouth during conflict, Forgiveness will be easy. Some people can curse for Africa.. I pray we all learn a thing or two.

You are right. Forgiveness is easy when there aren't hurtful words said.

A situation where you are walking away and your partner is following you and is hell bent on continuing in an already charged atmosphere? It's difficult with a partner like mine.

Hmm. I understand you, sis. It's very hard to stay sane in such a situation. These days, I've learnt not to say hurtful things because I'm only responsible for whatever I say. But in a situation whereby things have gone really sour, it's easy to say whatever comes to mind because at that point, we probably no longer care about the relationship.