No matter how much you know or write about relationship (just like me), there are some things you’ll still have to learn from personal experiences for them to stick.

Marriage is an institution of constant learning, unlearning, and relearning a lot of things.

While I’ve learned a lot of things in my few years of marriage, one lesson sticks the most.

It’s so indelible in my memory, and I keep remembering it each time I’m about to make the same mistake that led to learning the lesson.

Because I learned it painfully.

I hate to remember the events that led to the quarrel which gave me the most painful marital lesson so far. It wasn’t a palatable experience at all.

Okay, so, during the early days of our marriage, my husband and I had a quarrel.

But what did I do?

I talked too much. Like, way too much. Rather, I wrote too much.

It was a text message. I gave a six paragraph reply to his one paragraph message, saying things I wasn’t supposed to say, threatening to do things I knew I couldn’t do.

He took my words seriously and things went south. Like really south.

That’s actually the downside of being a writer.

Your creative part possesses you during a quarrel and you begin to cook up ideas in your head that will put you into trouble.

Eventually, it was my message that became the crux of the quarrel, not even what led to the quarrel initially.

It’s natural to say hurtful things when we are angry but I’ve learned not to say too much or watch what I say when I’m angry.

Even if your anger is justified, you can become the wrong person if you say things you’re not supposed to say.

So, these days when I’m hurt and I’m tempted to spew hurtful words, I take a chill pill and tell myself that the quarrel wouldn’t matter in a few hours, but my words will.

I remind myself that words are like eggs, once broken, can never be retrieved.

Your spouse might forget the cause of the quarrel but they’ll never forget the hurtful things you said.

Also, I tell myself that it’s not wise to say everything that comes to my mind, because some of it are likely to be exaggerated because I’m angry.

So, I have more conversations in my head than I have with my husband whenever I’m angry. Because if I’m to say half of what goes on in my mind…

So much damage will be done. And you know how words affect men, especially ones said by their women.

Do I get angry and say stuff?

But not as much I’d have if I hadn’t learned my lesson.

I’m more guided now. I don’t spill everything that comes to my lips. Otherwise, my marriage would be gone because my words could sting like venom. 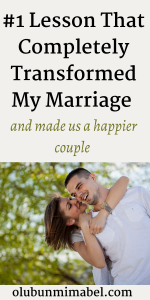 It’s important that couples learn not to say hurtful words in anger. These words could keep hurting even after the quarrel has ended.

And the most painful thing is that, we sometimes don’t really mean the things we say when we are angry. But it’ll be too late to take them back and our spouses are hurting already.

How do we convince them that we didn’t mean what we said?

If you tend to say hurtful words when you’re upset or you have anger problems, learn from me and apply the tips I shared above or you seek counselling from therapists/professional counsellors.

You can even seek counselling online from reputable counselling platforms like betterhelp.com

I hope you have a beautiful marriage! 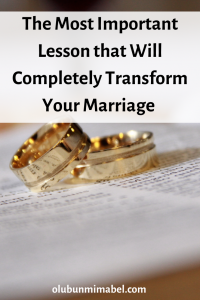 The Importance of Unlearning Some Things in Marriage - Marriage Missions International

[…] “…So, these days when I’m hurt and I’m tempted to spew hurtful words, I take a chill pill and tell myself that the quarrel wouldn’t matter in a few hours, but my words will.” (Olubunmi Mable, from her article, The Most Painful But Important Lesson I’ve Learnt in Marriage) […]