If I had a dollar each time I came across an article, a social media post, or a quote on ‘keeping your man’, I would be a millionaire.

I understand that society expects that the greatest aspiration of every lady should be to have a man to call her own.

Not just that, we have been made to believe that men are scarce, or, good men are scarce; so, if you’re lucky to have one, keep him with all thy might.

While I take this to be a myth, I won’t fail to agree that the level of moral decadence that has plagued our world today has made good people scarce, generally.

Now, we’ve been told many things about keeping a man.

There are popular opinions on what a lady needs to be, have, or do to keep her man.

Beauty is enchanting. We’ve been told that men are moved by what they see. Who doesn’t love beauty?

But, some beautiful women still get cheated on or even dumped.

Is their beauty not enough?

Some men have cheated on their wives/girlfriends with women who aren’t even as beautiful.

How much beauty is enough to keep a man?

Women have been taught to combine good looks with badass culinary skills because the way to a man’s heart is through his belly.

But, there is good food everywhere – restaurants, shops, cooks…

As much as eating is pleasurable, not everyone cares about food, especially in this age of weight loss and healthy eating craze.

They say men aren’t only attracted to beauty but also intelligence. So, a woman should be a combination of beauty and brains.

But even beauty and brains have had their own share of disappointments from men.

While it’s good to be funny, adventurous, and spontaneous (because it adds spice to a relationship), you can still be spontaneously and adventurously dumped!

You must be familiar with these sentences :

“Give him whenever he wants.”

“Look attractive for him always.”

Take it from me, this doesn’t keep a man.

I’m not saying physical intimacy isn’t important in a marital relationship, but you can give a man all the styles and he’ll still be checking another woman out, especially if you are a single lady.

If you think you can drag a man to the altar with physical intimacy, you are very wrong.

In fact, pregnancy doesn’t keep a man either.

Read: What Do Men Really Want?

Men love women who are financially independent, women who don’t depend on men to thrive, women who make their own money.

It’s an absolutely great thing to have your own money as a woman because indeed, one of a woman’s greatest securities is a little money of her own.

But this doesn’t guarantee faithfulness from a man.

Sorry to burst your bubble.

Some argue that being submissive will earn you a man’s love.

While this could be true in some cases, it doesn’t necessarily earn you a man’s loyalty.

You can be submissive to a man, and he’d leave you for a woman who treats him like his errand boy.

The answer is this – you cannot keep a man that doesn’t want to be kept!

Read: The Very Reason He Has Not Proposed

Don’t get me wrong. I’m not saying all the seven points I wrote above aren’t important.

Sure, they are very vital to the survival and sustenance of a relationship, but, they do not hold water if a man isn’t committed to you.

While it’s good to play your own part by having or working towards having the above qualities, it’s a man’s decision to keep himself for you.

It’s not your duty to keep a man, it’s your man’s duty to keep himself for you. Just as you’re keeping yourself for him.

You can only keep someone that wants to be kept.

At the end of the day, loyalty/faithfulness in a relationship is a decision each party has to make, and no one can make the decision for you.

Read: How to Make a Man Respect You

Don’t you ever feel bad if a man leaves you for another or cheats on you.

It’s his decision, not yours.

Yes, you are not perfect, but even with your flaws and imperfections, you remain amazing.

If a man loves and respects you, you won’t have to struggle to keep him. He’ll respect himself by keeping himself for you. If he cherishes what you share, he won’t make himself available to other women. He won’t put you in a position where you have to work and strive to keep him.

Some women battle with low self-esteem whenever their partner cheats on them or breaks up with them. They keep asking themselves, ”Why am I not enough? What did I do wrong? What didn’t I do right?”

They say to themselves, ”If I was enough for him, why would he leave?”

Girl, you are more than enough. It’s not about you, it’s all about him. It’s his choice, not yours. Any man who feels you are not enough for him doesn’t deserve you.

And never stay with a man who constantly makes you feel that you are not enough because you’ll forever try to please him just for you to be enough for him. And boss babes don’t have time for that.

While you work on yourself to be a better version of you, love yourself while at it, and let a man love you for who you are.

Both partners in a love relationship bear the responsibility to be committed to each other and preserve the sanctity of the relationship.

If only one person is doing this, then it’s no longer a relationship.

In a healthy relationship, all hands must be on deck to make things work.

You can’t keep a man that doesn’t want to be kept even if you give him the seven things I wrote above.

It’s left to you to decide if such a person deserves you. A person who doesn’t appreciate what you do to make him happy. 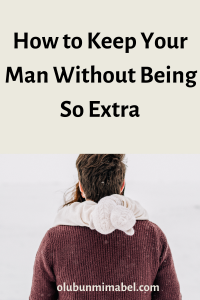 Absolutely correct!!! Folks let this very clear at first you can be a whole damnn package but delivered at the wrong door... Found this post really helpful, will not read further after this post that's enough!!!!

Mable this artyis so good . Keep it up.There r some people who do not know what self respect is.

Glad you found it good! Yes, self-respect is key.

ok, you're an ass

Maybe I touched a nerve?

Whatever it is, sis, you didn't have to be disrespectful. There's a reason I put a disclaimer after each post.

How do I get signed up for your blogs?

Oh. I've been so lazy at growing my email list. I hope to before the end of the year.

This is amazing and helps a lot. Thank you! Now, quick question pls....how do you get spontaneous or be fun to be with? coz most times....I just have no idea in this aspect.

I have a post on how to be funny even if you are not naturally funny. You could search on the blog.