Want to know how to spot a female player?

You must have had some bad relationships that shook you up in the past, but there is nothing worse than being played.

Perhaps in your previous relationships, you just had problems with ladies due to their high maintenance and other flimsy reasons.

But being with a female player hits and hurts differently, believe me.

Outlined below is a comprehensive list of the signs she’s playing you.

Want to know how to spot a female player; want to know the signs she’s playing you?

Most of them are contained in this article.

Take note of them and just maybe, you’ll realize that you’ve been her side guy, backup plan, or worse still, a diversion all along.

How To Spot A Female Player: 8 Signs She’s Playing You

Although it’s wise to wait for some time before you introduce your love interest to your friends and family, it raises eyebrows when you’ve been together for months and you still haven’t met any of them.

Push for a meeting if she’s laid back about the whole idea.

Is possible she doesn’t know what to say to her family and friends about your relationship, especially if you both have not had a conversation about being exclusive.

You can begin by asking her to introduce you to some of her closest friends.

It can be one of the signs she’s playing you if she wiggles her way out of the suggestion.

She probably doesn’t want to complicate things because she doesn’t see herself in a long-term relationship with you.

2. She Stands You Up Often

If she bails on plans often, then you probably shouldn’t be looking too far on how to spot a female player because it’s a huge sign she’s playing you.

Not only is it disrespectful, but it’s also annoying.

I wonder why you still want something serious with someone who doesn’t as much honor the plans you made together.

She doesn’t make you feel important?

It’s one of the signs she’s playing you.

The way things are at the beginning of a relationship sets the standard for the rest of the way.

And if you’re one of her priorities from the beginning, I don’t think you’ll ever be.

3. To Her, You’re Not Her Boyfriend

It’s either that she wants to keep her options open or that both of you aren’t exclusive yet that’ll explain why you’ve been together for some time and there are no titles in the relationship.

If she still goes ahead to introduce or address you as her friend few months into the relationship and it doesn’t sit well with you, feel free to address the situation.

And if she’s bent on towing that path, it can be one of the signs she’s playing you.

If both of you are not on the same page in the relationship, you can choose to move on with someone who wants the same things as you.

4. She Flirts With Other Men Constantly

There’s no need to look far on how to spot a female player. If she’s flirting with other men every other day.

Her actions should correspond with her words.

She can’t say that she’s in an exclusive relationship with you and still go ahead to chat other men up at every slightest opportunity she gets.

That’s one of the clear signs she’s playing you.

More importantly, if she’s doing the flirting right in front of you, she’s far from ready for any kind of serious commitment.

5. She Uses Alias To Save Your Name On Her Phone

One of the most heartbreaking signs she’s playing you is if your name on her phone is saved as an alias or something unrelated to you.

It’s different if she saved your name with a nickname or a joke from your first meeting with her.

But it’s very suspicious and unsettling to have an unrelated alias for someone you’re dating except you’re hiding them from someone.

Talk to her about it.

You might not be far from unraveling how to spot a female player.

6. You Have Never Been To Her Place

There’s every cause to question intentions if you’ve never been to the place of a lady who you’ve been seeing for over a month and she’s probably been over at your place one too many times.

When you’ve ticked off by yourself whether she has roommates or if she’s a messy kind of person, the next logical thing to think of is if she’s hiding something.

If she always manages to ramble up an excuse whenever you talk about going over to her place, you’re probably the ‘something’ she’s hiding.

It’s one of the signs she’s playing you.

The only way to know your stand in her life is to ask directly and know her reason if she says no.

If she has a good reason, let it slide but if she has none, you’re just a second option in her life.

7. She Doesn’t Talk About A Future With You

It’s weird hearing your date of just three weeks making plans about your lives together.

But if you’ve been exclusive with a lady for almost a year and she has never made plans for both of you for some time, it’s time to make some findings.

She might just be living in the present and having fun with no strings attached.

That’s why you need to make sure that you’re on the same page with your partner.

Perhaps also, she may not know what the future holds for her, or worse still, she doesn’t see you in her future.

So, to avoid having to read a whole book on how to spot a female player (Signs She’s Playing You) much later, you need to sit her down and define your relationship with her.

Find out if both of you are on the same page in the relationship.

8. She Blows Hot And Cold

You don’t have to search deeply for how to spot a female player if she’s the type to blow hot and cold.

One moment, she’s all over you making major plans for both of you and the next moment, she wants to be as far away as possible from you while claiming that things were never serious between both of you.

Someone who is unsure of what they want and is confused tends to be hot and cold.

It’s not fair that you’re being pulled back and forth by her.

Simply find someone whose energy matches yours and build something concrete. 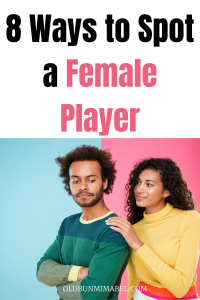