What does it really mean to marry your friend?

‘Marry your friend/best friend’ has got to be one of the relationship tips that have become cliche.

While I agree that friendship is one of the essential ingredients of a successful marriage, there’s more to marriage than ‘marrying a friend’.

Even more, a lot people have gotten it all wrong in the name of ‘marrying my friend or marrying my best friend.’

What does it really mean to marry your friend?

Before I explain what it means to marry your friend and who a friend is, I’ll share some popular myths about marrying your friend.

Myths about marrying your friend

1. A friend is someone you’ve known for a long time. You might even be childhood friends or college friends.

2. Friendship is all that matters in marriage.

3. When you marry your friend, your marriage will ALWAYS work. Marrying your friend means you’ll have a good marriage because you’ve known each other for so long.

4. Friendship is the same as marriage. So, my friend will always act in marriage the same way he does in friendship.

5. We’ve been friends for a long time, we don’t need to date or court. We’ve known each other well enough.

6. A friend is someone I can do naughty stuff with.

Some people have made decisions based on these myths and were disappointed.

As a matter of fact, some people got married to friends they’ve known for years but they didn’t last one year in marriage.

Why is this so?

Who is a friend?

A friend is someone you like and who likes you, one you know, who cares about you, one you’re free with, one who supports you and one with whom you share similar values and maybe interests.

Now, when we say marry your friend, it means marry someone with the above attributes.

It doesn’t necessarily mean someone you’ve known for years. This is where a lot of people get it wrong.

I know time is essential in building friendship.

So, of course, you must spend time in knowing whoever you want to marry.

But truth is, no matter how long you’ve known a person, the real knowing starts when you get married. Your friend becomes your spouse. And believe me, there are some things you’d tolerate in a friend but not in a spouse. Marriage requires a deeper level of commitment than friendship. It requires more responsibility and accountability to one’s spouse.

Then, you’d realize that it takes more than friendship to make a marriage work. It even requires more than love and shared chemistry.

What then does it take?

At the end of the day, it’s about marrying someone who shares your values and someone you can befriend.

So don’t mistake ‘marry your friend’ for marrying someone you’ve known for a long time who doesn’t have the attributes that I mentioned earlier or one who isn’t ready to be committed to you in marriage.

Do not marry your friend if the necessary conditions for marriage aren’t met. Marry someone who shares your values and is ready to make marriage work. Marry someone you can befriend.

In my opinion, this is what marrying your friend really means. 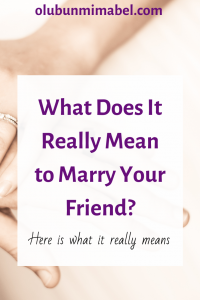 Hmmmm. But truth is, no matter how long you’ve known a person, the real knowing starts when you get married. This is the whole truth, and nothing but the truth. A friend of mine I'm very interested has mentioned this to me and it has left me wondering really. I've always asked myself what's going to change about me when I get married, or what's the real knowing that's going to come out. I always pray I don't surprise myself because I know humans change. I hope whatever knowing that comes out of being married isn't something that someone wouldn't be able to handle.