What are the signs your boyfriend’s family doesn’t like you?

Relationships take a lot of work, and no one gets along with everyone.

But if you’re dating someone and his family doesn’t like you, it can be hard to figure out why.

It’s always a little awkward when you’re dating someone and don’t know how their family feels about you.

In fact, it can be downright scary if you feel like they don’t like you at all.

It can be hard to tell if your boyfriend’s family doesn’t like you.

But how do you really know if your boyfriend’s family doesn’t like you?

They might not outright say they don’t like you, but there are subtle signs that can tip you off to the fact that they’re not a fan of yours.

These are some definite signs to look out for that will help determine whether or not his family really likes you:

1 They Don’t Seem Lively When You Arrive

In general, the family should greet you warmly and make small talk.

Maybe ask about your work or your family.

At the very least, they should be friendly and polite.

The best case scenario is that they should ask about your interests in a way that shows genuine interest in hearing about them rather than just being perfunctory.

If they don’t seem lively when you arrive, that could be a sign they don’t like you.

They might not be saying anything negative about you, but their body language may give away the fact that they’re not very happy about your relationship.

2 They Don’t Really Talk to You

They might be polite, but they could also be a little reserved.

They ignore your presence.

They give you the cold shoulder when you are around.

They avoid talking with you except when absolutely necessary.

They just don’t seem especially talkative or friendly when you are around.

When this happens, they are probably still trying to get used to you.

On the other hand, if your boyfriend’s family is not particularly interested in you and rarely engages with you, it could be a sign that they don’t like you too much.

If they have no interest in getting to know you as a person or learning more about who you are, this could mean they’re not interested in being a part of your life.

3 They are Always Eager to Leave When You Are Around

It’s natural for families to spend time together — even if they don’t always get along.

But if they’re constantly looking for an excuse to leave when you show up, then there’s a problem.

It could be that they don’t think highly of your relationship or that they just don’t like spending time with others in general.

4 They Never Invite You Over

One of the most obvious signs that your boyfriend’s family doesn’t like you is that they never invite you over for dinner or other social events.

If you’re dating someone who has a close relationship with his family, they will probably want to meet any girl he brings home.

If this doesn’t happen, it could be an indication that they’re not really on board with your dating each other.

5 They Ask Lots of Questions About Your Background

When your boyfriend’s family asks a lot of questions about you, it can be because they are trying to get to know you better.

However, if the conversation seems like an interrogation and is uncomfortable, it may be a sign that they do not approve of you or your relationship with their son.

Revealing questions such as your plans for the future,  religion or lack thereof, past relationships and whether or not those exes are still part of your life, childhood experiences and education history usually indicate that they are trying to find out if you are good enough for him.

The fact that he chose to be with you should be enough reason for them to accept you.

6 They Don’t Give Any Praise

If your boyfriend’s family never compliments you, that could be a sign of disapproval.

If you’ve been dating for a while, your boyfriend’s family should have already heard about how great you are.

If they don’t seem to buy into your awesomeness or they don’t comment on your positive qualities, they may not be as fond of you.

If they’re not even willing to make an effort for the sake of their son’s happiness, they definitely have reservations about the relationship. 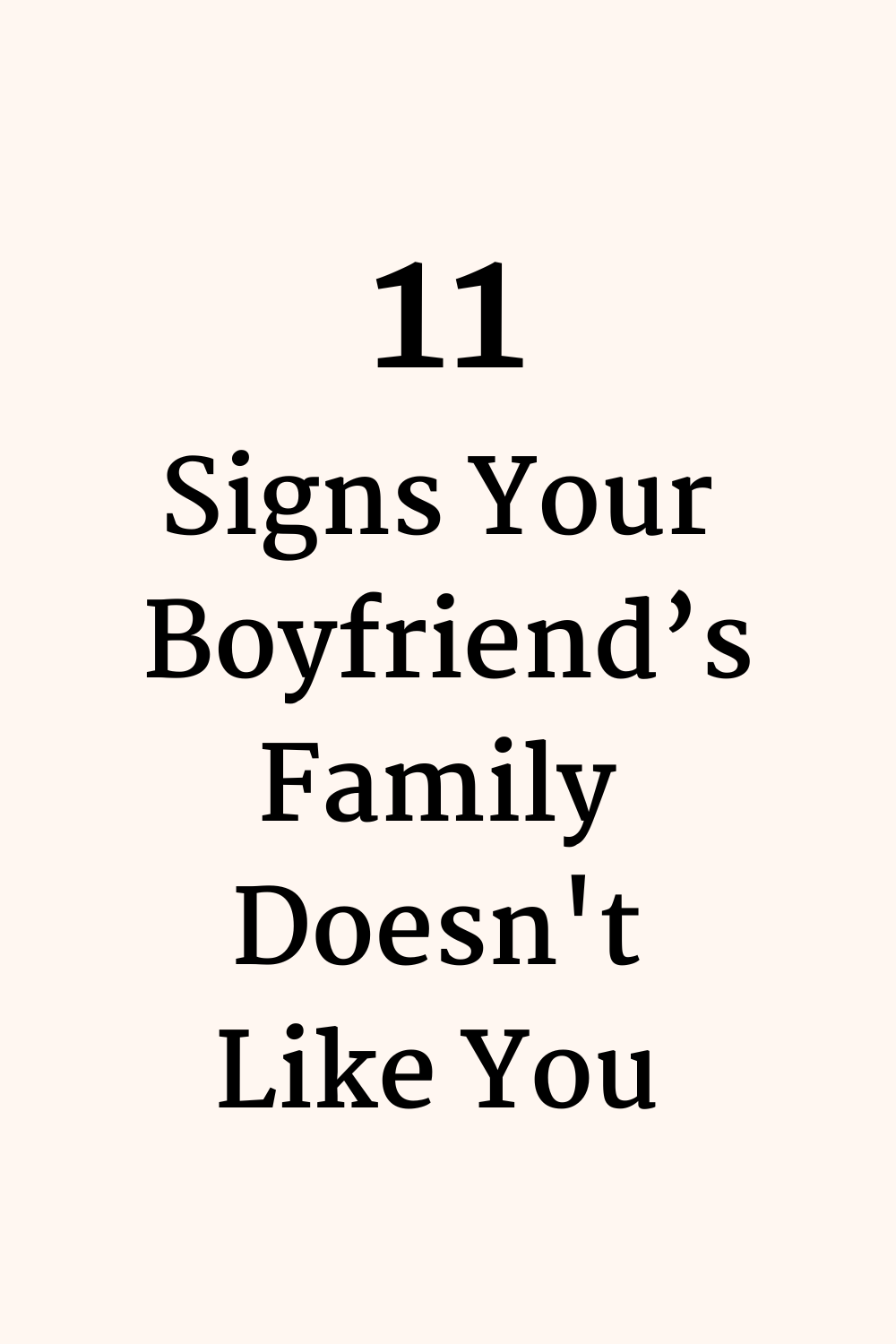 7 They Don’t Include You in Family Conversations

Some families love to talk about their favorite TV shows and movies.

Some share stories about their children, grandchildren, and pets.

But it’s a red flag if your boyfriend’s family doesn’t include or welcome you in any of those conversations.

8 They Don’t Care About Your Interests or Hobbies

If your boyfriend’s family doesn’t care about your interests or hobbies, it is another sign that they don’t like you.

If they cared about what interested you or your hobbies were, they would ask questions about them and show an interest in them.

But if they don’t care at all and simply dismiss these things as unimportant and irrelevant, it means that they aren’t interested in getting to know who you really are as a person and what makes up who you are.

9 They Don’t Include You in Family Activities

When you meet the family, they should invite you to participate in activities together as a group.

If they don’t include you, then this could be a sign that they don’t approve of the relationship or simply don’t like you.

If they don’t seem to want to include you in family gatherings or other special events, it’s a sign they may not like you very much.

They might not invite you to join them on trips or holidays, or they may just make excuses not to invite you.

If this happens often, it’s probably a sign that they don’t approve of the relationship or simply aren’t comfortable with it yet.

They have negative things to say about you.

They give unsolicited advice about how to improve yourself or your relationship with your boyfriend.

They constantly attack or criticize you.

Their behavior seems disrespectful toward you.

They may even make jokes or snide remarks about you.

Their rudeness is proof that they don’t like you.

11 They Don’t Offer to Help You Out

When it comes to families, one of the biggest things that make them great is their willingness to help out one another when needed.

For example, if one person in the family is having trouble financially or has a baby on the way or something else stressful going on in their life, then other members of the family will often offer up whatever help they can give.

If they don’t do this with their son’s girlfriend, it could mean that they’re not interested in being involved in her life, even if it means offering help when she needs it most.

One of the most important things to remember when dating someone is that their family is part of the package.

While it’s important to be aware of the signs that your boyfriend’s family doesn’t like you, it’s also important not to overanalyze every single interaction.

Don’t worry; you are not alone.

Most people have trouble dealing with their boyfriend’s family at some point or another.

And if you can’t deal, especially if your boyfriend cannot stand up to his family and defend you, you might have to rethink your relationship. 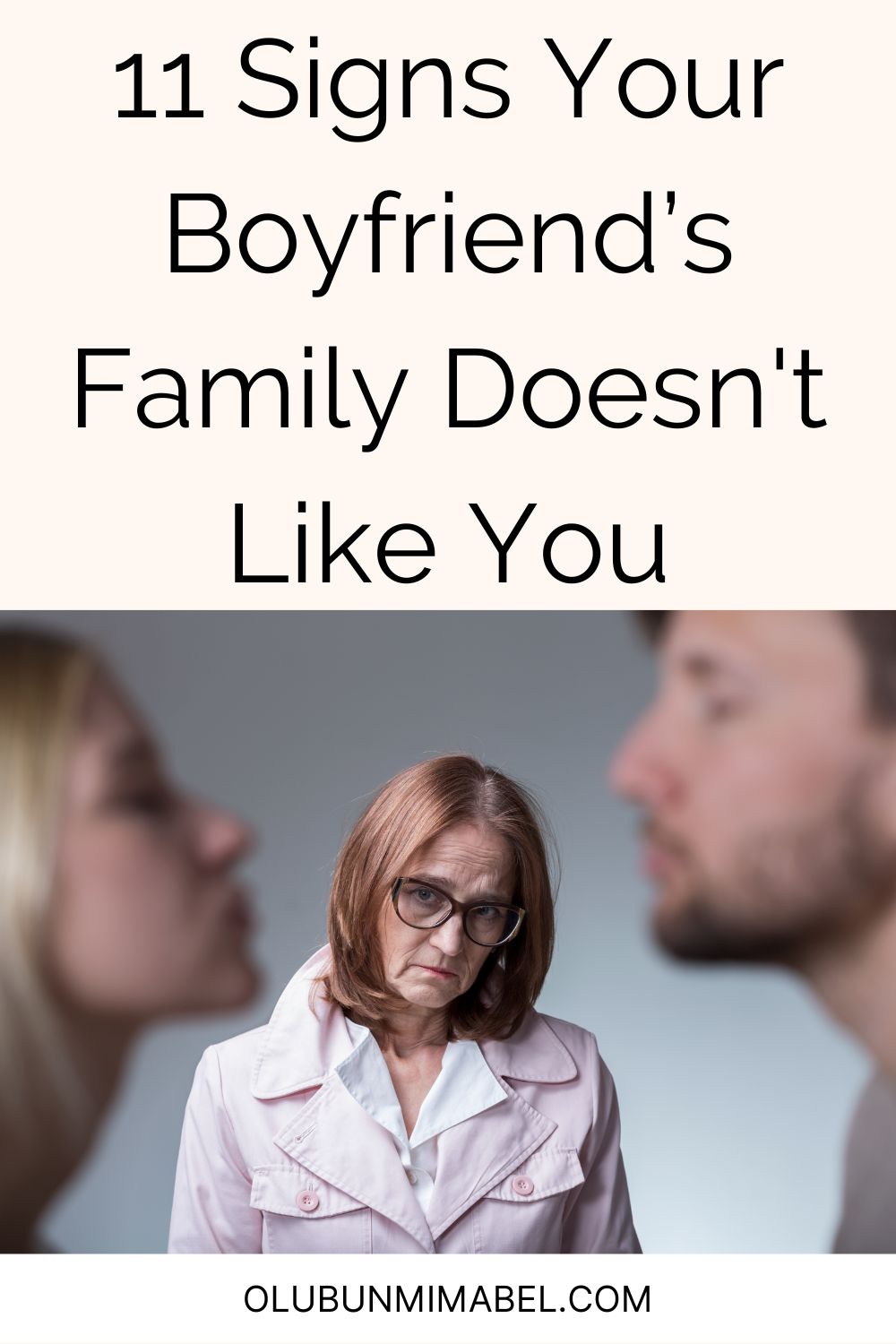