So you’ve got a boyfriend, and his mom talks bad about you.

It is not an ideal nor enviable situation when your boyfriend’s mother is not particularly your fan.

While this might be uncomfortable, here are ways to deal with the situation:

”My boyfriend’s mom talks bad about me!”

1 Look for a good book on the topic 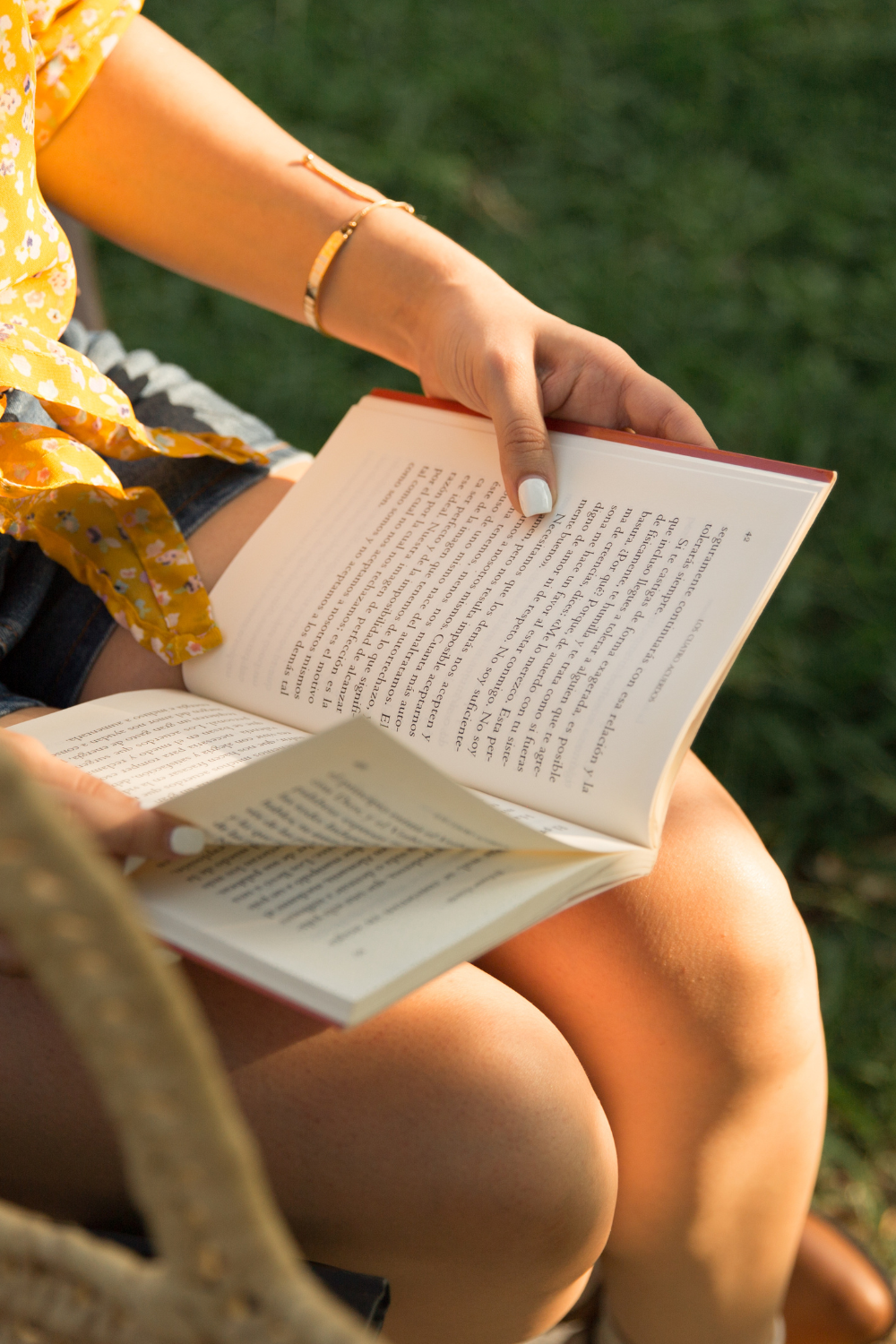 Your boyfriend’s mom being mean to you can be hard to deal with.

You probably have never experienced this before.

It can be difficult to know what to do.

One of the best ways to deal with this situation is by finding a good book on the topic.

There are many books out there that can help you navigate this difficult situation.

Once you garner knowledge about it, it will be much easier for you to understand her behavior and how to deal with it.

It’s advisable to read up on what others have done in similar situations so that you can learn from their mistakes and successes.

You’ll find that reading about others’ experiences will help give you courage and strength.

It also won’t make you feel out of place or lonely.

You must understand how to deal with difficult people to be effective in your relationships, your boyfriend’s mom inclusive.

2 Talk to your boyfriend about it 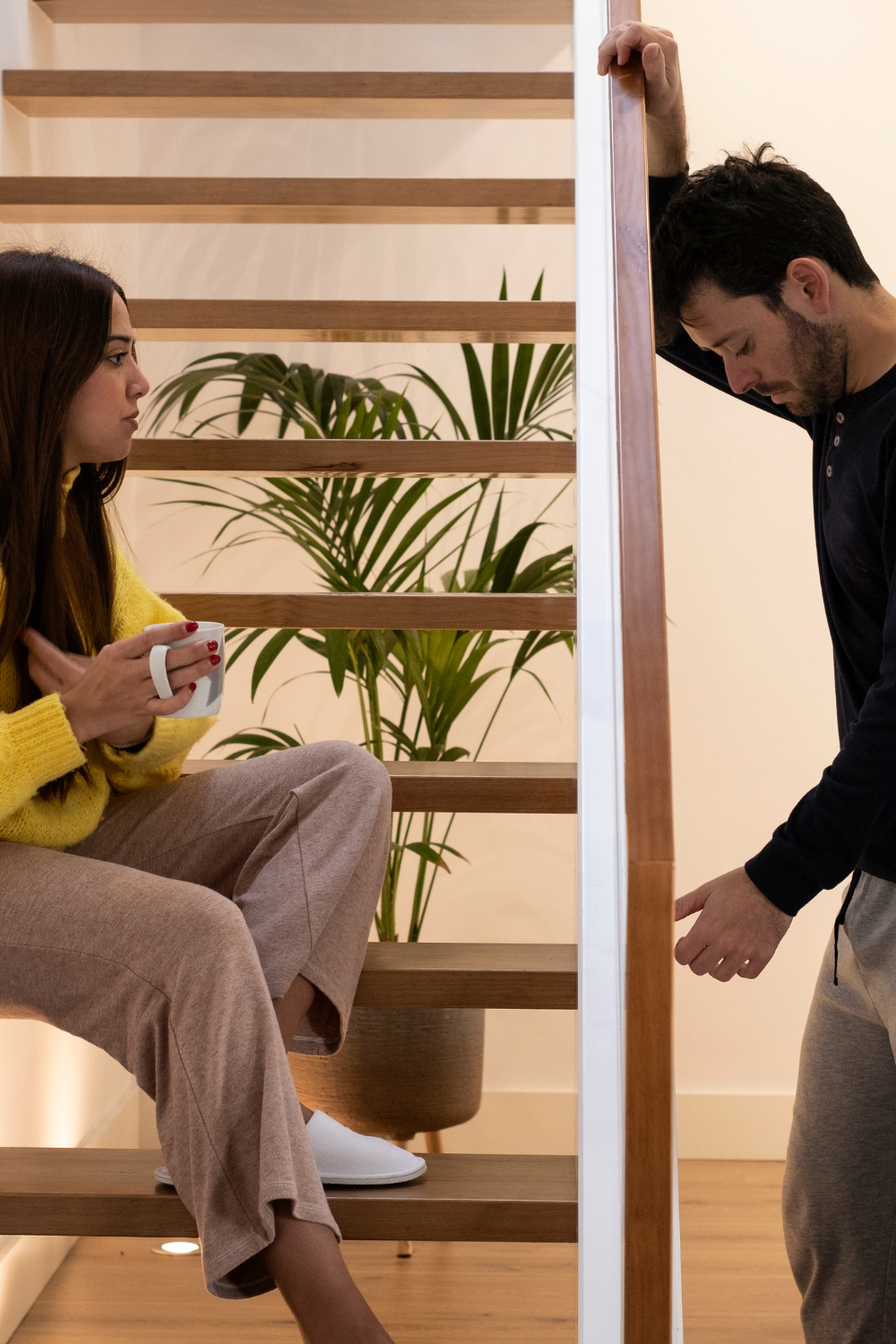 It’s important to talk to your boyfriend about it.

You can’t assume that he knows what’s going on, and if he doesn’t know, he won’t be able to help you in any way.

If his mother is having problems with you, it will affect the relationship between the two of you, and if you’re concerned about that, so should he.

When you talk with your boyfriend, ensure he understands how much this issue affects you.

Have a conversation with him about how you feel, how he feels about his mom,  and what he thinks of what she said.

However, keep in mind that there are some things you don’t want to do when talking with him.

Don’t make yourself look bad in the process by confronting him angrily.

It would hardly resolve the issues and might cause more problems.

It might be hard to bring up the issue at first, but if you can bring it up in a way that doesn’t make either of you feel attacked or unsafe, it could be a great opportunity for both of you to grow closer and stronger as a couple.

3 Don’t talk badly about her to anyone else 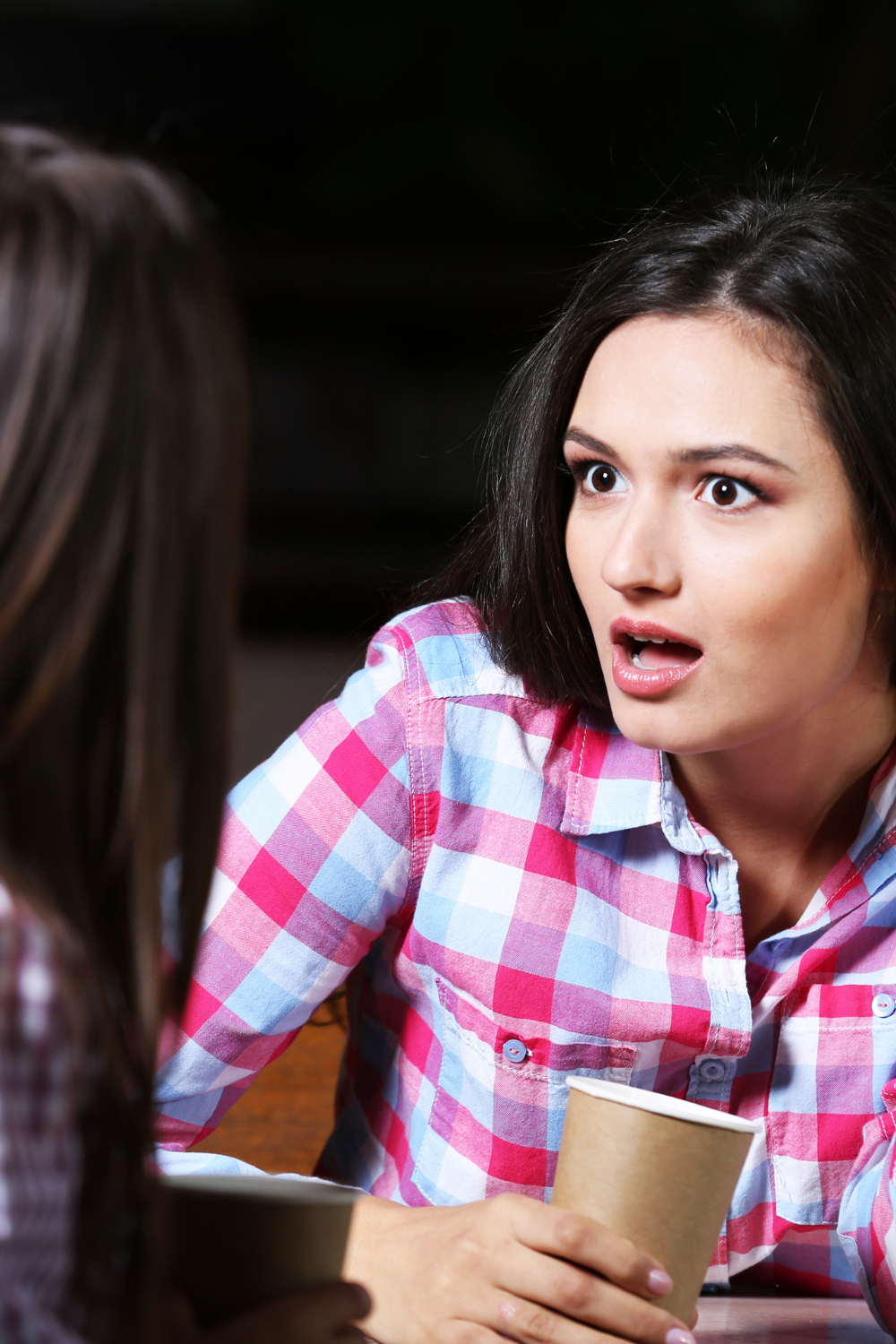 Resist the urge to pay her in her own coin.

Don’t gossip about her, and definitely don’t talk about her behind her back.

Don’t let your boyfriend hear his mom being talked about negatively in any way.

Not only is it not courteous, but it might also put you in the bad books of your boyfriend.

Also, if the situation were reversed, you wouldn’t want your boyfriend to go around making negative comments about your mom. 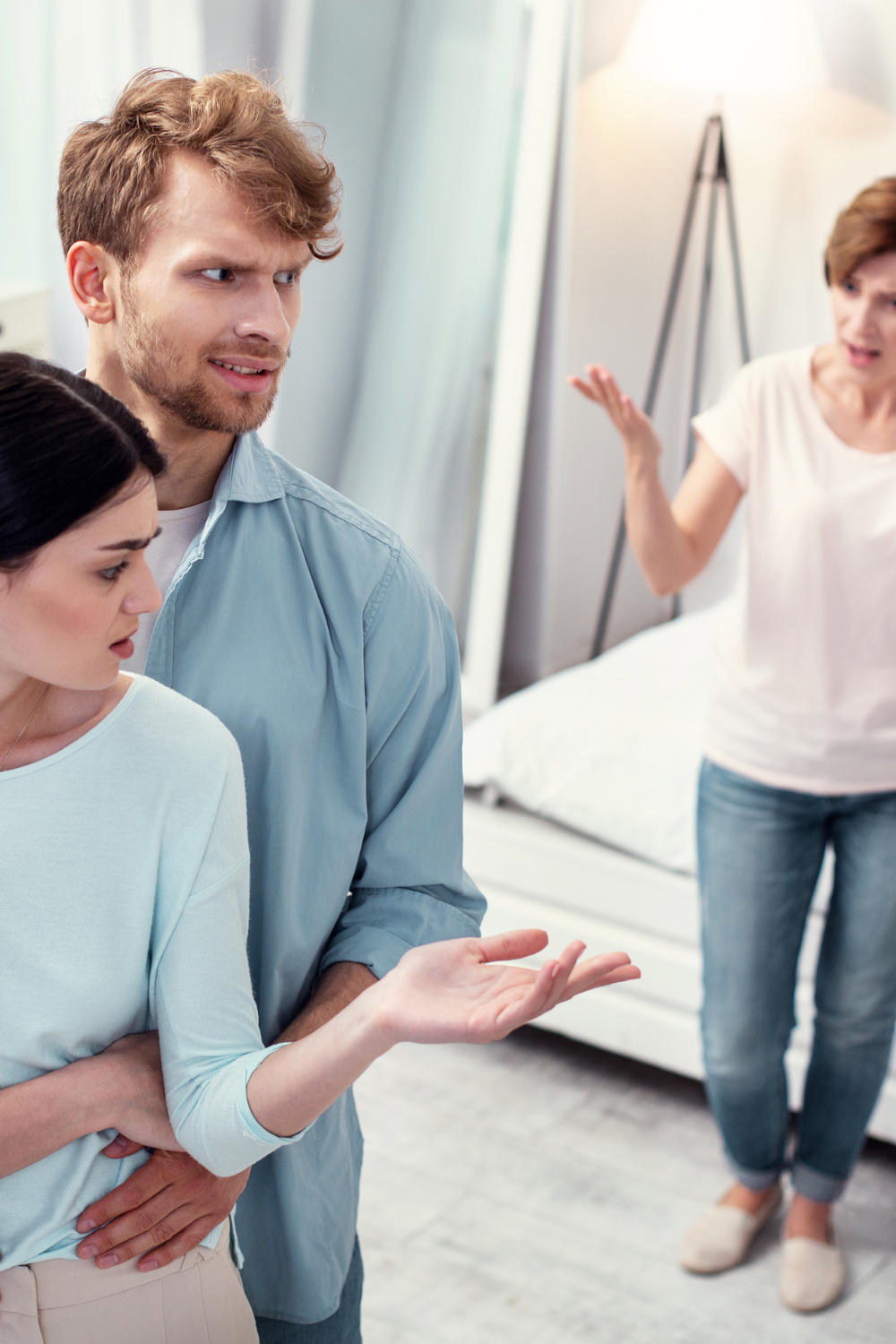 If the two of you are the only ones in on her foul treatment of you, don’t try to create drama between her and your boyfriend.

This may cause a strain on your relationship.

It can be tempting, but it’s not a good idea.

It is not the way to go.

It is better to have a sit-down with your boyfriend about the issue.

5  Stay away from her

If she’s constantly saying things that are hurtful and being intentionally mean-spirited, you may want to consider cutting off all contact with her.

It’s hard to hear your boyfriend’s mom talk about you in a negative way, but sometimes, the best thing to do is avoid her.

As much as possible, maintain a healthy distance between yourself and her attitude.

If she’s constantly saying things that are out of line or otherwise disrespectful towards you, it’s best just to stay away from her.

6 Be pleasant when you interact with her

If you want to maintain a positive relationship with your boyfriend, it’s important not to let his mother’s negativity get under your skin.

Don’t get into a fight with her.

She will probably try to get under your skin by saying something mean or rude about you, but don’t let it affect your relationship with your boyfriend or his other family members.

When she starts talking about how much she dislikes you or what she thinks of your relationship, try being pleasant and kind in response.

There’s no need to be overly sensitive or defensive.

If her comments are hurtful or offensive, take a deep breath and try not to let them get to you.

This doesn’t mean that you should be a doormat or allow yourself to be bullied.

If she does something rude or inappropriate, speak up firmly but politely about it.

You should never let anyone walk all over you just because they are older than you are.

When your boyfriend’s mom talks bad about you, it can be a painful experience.

So it’s hard not to take it personally when someone says something negative about you.

In fact, most people do take it personally.

Feeling insulted, upset, and hurt when you’re criticized is normal.

But remember that there are ways to handle this type of situation so that you don’t get caught up in the drama.

Even though they might sound personal, they aren’t meant to be taken that way.

When his mom says something negative about you, don’t assume that it’s true or that it reflects who you are.

After all, what other people think of us isn’t always true or accurate, especially when their opinions stem from personal bias and prejudice.

8 Try to find out why she does it 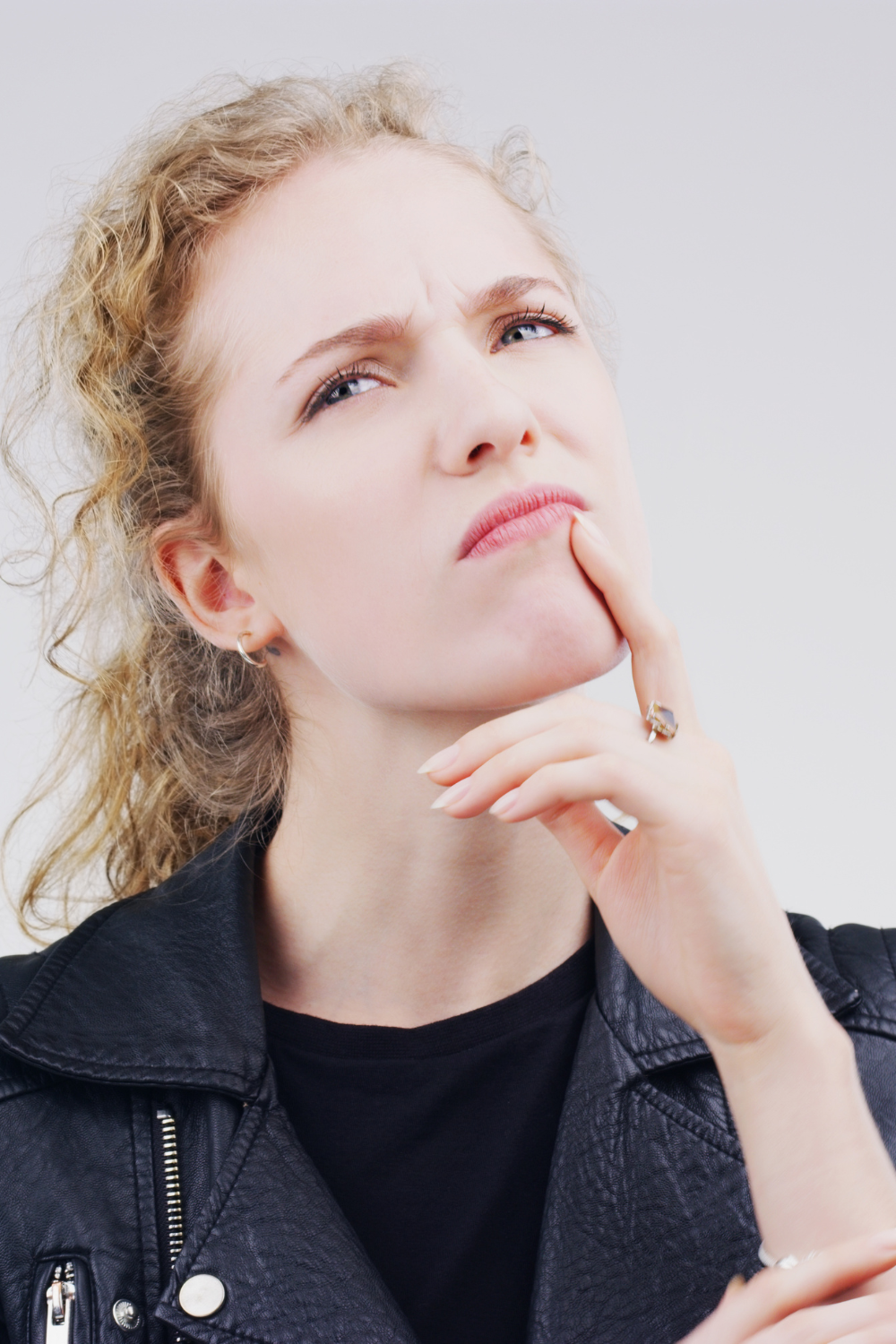 What makes her feel the need to talk so much about you?

Is there something you’re doing that triggers her behavior?

If not, maybe there are probably other issues going on in her life that make her feel threatened by you or your relationship with her son.

This is a very common problem.

Mothers often do not accept the woman their son has brought home, and they will do whatever they can to try to sabotage the relationship.

This can be anything from subtle comments to outright hostility.

She knows that you are going to be an important part of her son’s life and may feel threatened by your presence in his life.

If he has been single for a long time, she may feel jealous that he has finally found someone who loves him as much as she does.

She may be worried that you’re taking over her role in her son’s life or trying to take him away from her.

Try to understand where she is coming from so that you don’t take everything personally.

If you can, reach out to her and ask her if there’s something bothering her about your relationship with her son.

When you do, avoid direct confrontations.

Speak privately and create a calm atmosphere so that she can give an honest answer without getting defensive or angry.

You can’t control what other people say and do, but you can control how you react.

So, talk to your boyfriend about his mom’s behavior, try to keep a positive attitude, and avoid getting into arguments with his mother at all costs.

If you can’t cope anymore, breaking up is an option if you don’t want any negativity or toxicity in your life. 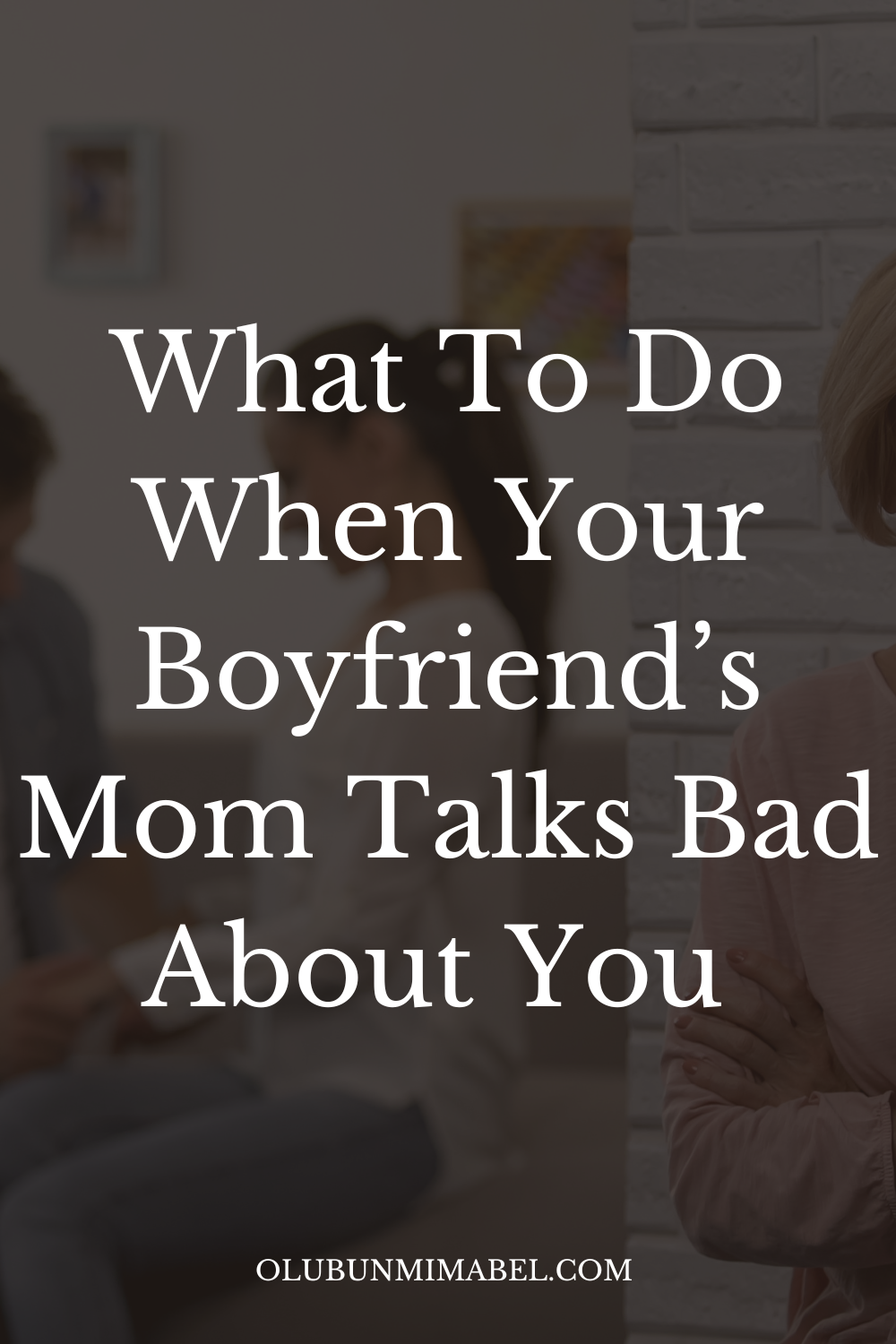 13 Amazing Signs God Wants You To Be With Someone