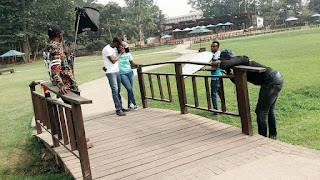 Okay, so we had our pre-wedding photo shoot like a few days before our wedding. We had thought we needed just a few pictures, since bros, lol, isn’t so much into pictures and I also tend to get easily bored. We ended up spending about four hours on the photo shoot, which actually turned out to be great. Apart from the stress of changing attires, we did well with the poses and maintaining connection, thereby giving our photographer less work to do.
We had the photo shoot in a popular garden in one of the South West cities in Nigeria. Some people can tell where that is. Ain’t mentioning that. Hihihi.
After the shoot, hubby said he’d like to swim in order to feel refreshed after spending some hours under the sun.
I couldn’t join him because I didn’t bring my swimming attire along, but a man could swim with a pair of boxers only. Such an unfair world. *swipes at a tear drop* Forget the fact that I can only stand and play inside the pool and not swim. Lol.
Anyways, I sat by the pool side and watched him and a couple of people swim. Not too long after, a teenage couple entered the pool. Before we knew what was happening, these lovers were having sex right inside the pool!
Holy Mary Mother of God!
The sight was not only shocking and disturbing but also disgusting. They became the object of everyone’s attention as people watched and shook heads in disgust. I guess the garden officials were alerted because they came and muttered some things to them, after which they stopped.

I’m not prude, but I find having sex in a public swimming pool very disgusting. Maybe I’m not adventurous enough. I don’t know. I’d like to know your thoughts about this.

So so disgusting! Are you sure they are real 'couple'?