You’re in love with him, but he doesn’t seem to be showing the same level of emotion.

You keep hoping and wondering if one day the story will change and he’ll start to develop some romantic feelings for you.

Perhaps signs that the relationship will never work out are starting to pile up, and you can feel your heart breaking more and more each day.

You’ve been trying everything you know how to do without success.

No one wants to be in an unreciprocated relationship, so I get it if you’re looking for signs he will never love you.

This article will explain some signs he will never love you so that you can get on with your life before it’s too late.

Signs He Will Never Love You

1. You lack an emotional connection with him

If your partner cannot form an emotional connection, this may indicate his unwillingness or inability to create a deep and loving relationship.

An emotionally distant individual is unlikely someone capable of committing to a long-term relationship.

If something does not feel right emotionally when being around him, this is because he probably has no desire for forming strong feelings towards others outside of sexual feelings.

Signs that he lacks the ability to form an emotional connection include being unable or unwilling to share emotions with you, never opening up about himself and his feelings, lack of empathy towards others, mainly yourself.

2. He doesn’t look at you with love

They say that the eyes are the windows to the soul. Sometimes, you can tell how a man feels about you through his facial expression. If you catch him looking at you with disgust, he is probably not in love.

He never wants to be alone with you.

You feel like a burden when you’re around him.

You have to beg him to hang out.

He always has something more important he could be doing, and if you ever ask him why he doesn’t want to spend time with you anymore, his answer is usually, “I don’t know what your problem is. I never did anything wrong!”

He loves spending time with other people but not you.

This makes it very easy for him to get over relationships because when the relationship ends, all of his friends are there waiting for him while you feel completely alone.

4. He is with you for all the wrong reasons

Signs he will never love you are that he is with you for comfort, support, or financial gain.

7 Signs He Will Never Propose

5. You can’t talk about the future with him

It feels impossible to have a real conversation about the future of your relationship with him because he shuts down every time.

After months of dating, if your man still doesn’t know where his relationship with you stands, it’s a clear indicator that he has no intention of committing to you – and this means he will never love you.

Signs like these are often hard to spot early on in the relationship because we tend to ignore red flags or don’t want to acknowledge them as such at first.

6. Communication with you is not a priority

Communication is the soul of a relationship.

When you are in love with someone, you want to keep in touch with them, bond with them, and feel close to them.

But a man who will never love you isn’t enthusiastic about communicating with you.

If your boyfriend only calls when it suits him best, for example, after midnight on Sunday night just before Monday morning starts – there is a good chance that deep down inside, he knows all along what kind of person he really is and how short-lived his relationships usually end up being.

7. When his words don’t match his actions

When he says he loves you but never makes time for you.

His actions will speak louder than his words.

If everything is always about him or your needs are constantly neglected, this might be a sign that he will not love you the way you deserve to be loved.

When it feels like all of your efforts are one-sided, and when there’s no reciprocity in your relationship, something is wrong with the picture.

8. He always has an excuse as to why he can’t commit to a future with you

If he is not willing to make plans for his own life, then it’s unlikely that he will be able to make time for yours too.

Maybe all of those excuses are just ways of avoiding the truth: he will never be able to love you and make time for your relationship.

If he always has a reason he can’t say the three words that every girl wants to hear, then it might be time for you to move on.

If he can’t say “I love you,” then it’s unlikely that he will ever be able to show his feelings for you.

10 Signs He Will Never Come Back

10. He is not willing to break unhealthy habits or work on himself

If he’s unwilling to improve himself through therapy, self-help courses, and other resources that could help him build a better life with you in it, then this might be the ultimate sign of his inability to commit himself fully to your relationship.

11. He tells you about his past heartbreaks when trying to explain why he can’t commit

His past is not a reflection of what could happen in the future, but this fear may have been holding him back from committing fully to anyone else since then.

Signs like these might indicate that there are unresolved issues with former relationships, which may pose as an obstacle if things were to get serious between the two of you.

If he says that there are reasons why he can’t give more than just casual dating – take note because something bigger might be going on here.

12. He doesn’t want you to meet his friends

If he’s not willing to introduce you to his friends, then it might be time for you to think about what this could mean.

Perhaps his friends know why and they’re trying to warn you?

Signs he will never love you include him indicating subtly or directly that he is single and searching.

A man who truly loves a woman wants to show her off as his girlfriend or significant other, not hide her away like an embarrassing secret.

If your guy doesn’t want people knowing about the two of you, it’s likely because there are no romantic feelings whatsoever on his end.

14. Lying about where they are going/who they are

If your boyfriend continues to lie about where they’re going when plans change at the last second, or if their story keeps changing every time someone asks them for details, then it may be cause for concern.

Men who care deeply about their women wouldn’t want to do anything that would hurt their feelings.

So if they are constantly making up excuses or lying about things, it’s likely because he doesn’t feel the same way as you.

15 Signs Your Husband Loves You Deeply

15. He never makes an effort to get to know your friends and family

He will never love you if he doesn’t even bother getting to know your friends and family.

Knowing your family is a sign of commitment from him.

Why would he go to that length if he’s never going to love you?

16. He never tries to win your heart over

If he’s not willing to put in the work, then it doesn’t even matter if you’re perfect for him because he isn’t going to see that!

Signs that a man is not interested include little effort in trying to get close or into your life.

He might say he “likes” hanging out with you, but when push comes to shove, his actions will show otherwise.

Please don’t waste time on someone who wants no part of it!

It’ll be easier, in the long run, knowing where you stand and what kind of person they are instead of wondering why they won’t commit or come closer than arm’s length away from you.

17. He says you deserve better than him

If a guy says you deserve better than him, then he doesn’t see the beauty that is right in front of his eyes.

Signs that a guy doesn’t think he’s the right person for you include telling you directly or suggesting indirectly.

18. He checks out other women

He will never love you if he doesn’t even bother checking out other women in your presence.

If his eyes are constantly wandering around the room, it’s time to move on!

Signs that a man isn’t interested include noticing every woman who walks by or any female attention they receive (in an innocent way, like maybe she smiles, even if nothing is going on between them.

This can make a girl feel insecure and unworthy of being loved, which no one wants.

Keep yourself from getting caught up in self-doubt because sometimes, what we think might be happening isn’t at all.

You need someone who appreciates only YOU for everything you have to offer.

Reading these signs he will never love you might be heartbreaking, but if you find yourself noticing any one or more of these symptoms, it’s time to move on.

Every couple has arguments and fights occasionally, but if every conversation leads back to his lack of interest and efforts in the relationship and him not meeting your emotional needs, he might not just be into you and may never will.

You deserve someone who can show up 100%, physically and emotionally; if this person cannot give it all to include “I love you,” he isn’t worth your time! 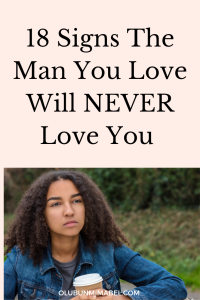