A lot of parents mean well, even when they say the wrong thing, or when they ignore their children’s feelings.

Many are just doing what was done to them.

But when parents are truly toxic, they may cause real harm to their kids’ mental health and sense of self-worth.

It’s important to be able to identify a toxic parent because it can help you protect yourself from being hurt by them.

And if you are a parent, it’ll help you prevent hurting your kids and to seek help, if necessary.

A toxic parent is a parent who is emotionally or physically abusive and uses their child’s love for them to control them.

They use guilt, fear, threats, and put-downs to get what they need from their children.

They may also try to turn a child against the other parent or their siblings.

Toxic parents may have been raised in an environment that was also toxic, or their behavior may be due to mental illness.

Toxic parents are not as uncommon as we would like to think.

And for their children, who have never known anything else, toxic parents are all they know.

As toxic parents have their way with the child, they often say some pretty hurtful things that get stuck in the child’s head and stay there forever.

As an adult, the child is left with these words reverberating in his or her head, forever feeling bad about themselves.

With toxic parents, you are badly hurt in the beginning and then left to heal on your own.

You are forced to take responsibility for fixing yourself.

Toxic parents have a very narrow definition of love, which is conditional and manipulative.

They feel they are entitled to control you and make no apologies for it.

You are supposed to act as they see fit or suffer the consequences.

It is not your place to question them.

Toxic parents are those that shame, demean, or criticize their children beyond what is necessary for them to learn and grow.

This article discusses  things toxic parents say to their children:

Being a parent is a full-time job, so it makes sense to expect your kids to help out around the house now and then.

But if you’re constantly demanding things from your child — whether it’s chores or emotional support — it can be an unhealthy dynamic.

By putting your needs ahead of your child’s, you’re essentially telling them that they don’t matter unless they make you happy.

It’s a common phrase for anyone who wants to avoid taking responsibility for their own behavior or actions.

If you point out that something they’ve said or done has hurt your feelings, they’ll just try to make you feel like that’s all in your head and that there’s nothing wrong with them at all.

They may even accuse you of being “too sensitive” if you complain about being bullied at school or having trouble making friends.

When confronted with something they said or did which caused a problem, this is often the response you’ll get.

They deny saying it, even though you have proof in writing or on videotape (for example).

4. “You’ll never be as good as your brother/sister.”

Toxic parents can say these things without even realizing they’re doing it.

They may think they’re motivating their children, or that they’re just being honest.

But words like these do more harm than good.

Instead of helping kids achieve their dreams, they fill them with self-doubt and create a lasting feeling of inferiority.

For example, a child who’s told, “You’ll never be as smart as your brother,” might decide not to apply for a scholarship or join the chess club in high school because she doesn’t want to risk failing.

5. “You’ll never amount to anything.”

This phrase is all about putting children down, which is hurtful at any age.

But it can be especially damaging when kids are young because it discourages them from taking chances or trying new things.

Parents may think this is a compliment, but it’s actually another way of putting children down by suggesting they aren’t enough on their own.

This is a broad statement that attempts to label your entire identity.

The intent is to make you feel like a failure in all areas of your life.

When you hear this, it’s important not only to remind yourself that these words are untrue but also that you can’t please your toxic parent no matter what you do.

If you decide not to pursue your dream career, they’ll just find another reason for not being proud of you.

You can’t win. It’s better just to do what makes you happy.

Your parent may blame you for their financial woes or any problems they have with their spouse or children.

This is a classic line used by parents to justify their meddling in their adult children’s lives.

“I’m just trying to help,” they insist. But what they’re really doing is controlling their child without permission or regard for boundaries — something every child needs from his or her parents.

Parents want their children to grow up and be independent, but sometimes they become threatened by their child leaving home and becoming their own person.

To prevent this from happening, some parents try to keep their kids tied to them by constantly comparing them to themselves (and in a negative way).

11. “You should be grateful I’m even talking to you after all the mistakes you’ve made.”

This is a combination of verbal abuse and gaslighting, which causes the child to feel worthless and unloved.

There’s just something about that “shame on you” line that makes an already uncomfortable situation absolutely unbearable.

15. ”You’re selfish.dd You never think about anyone but yourself.”

Toxic parents say things like this all the time.

It is their way of manipulating you into doing things they don’t want to do themselves – but still expect you to follow through on your end at some point down the road.

Toxic parents say this to their children in two ways: they call them stupid directly, or they make implications that the child is stupid.

They will say things like, “You should have been born with more brains,” or “If you were more intelligent, you wouldn’t have made that mistake.”

This is the hardest thing for adult children of toxic parents to hear because it cuts to the core of who we are—our identity.

To hear a toxic parent tell us that we’re stupid, or that we aren’t very bright alienates us from ourselves and forces us to start questioning our own self-worth. 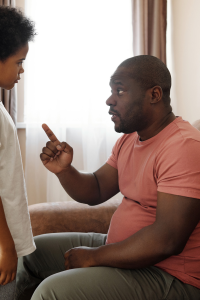 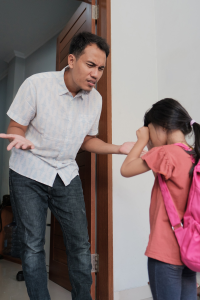 This phrase is generally used by parents who are frustrated that their children aren’t measuring up to their standards or expectations.

It doesn’t matter what the child is doing — playing in the yard, studying for a test or trying out for a sports team — it’s never good enough for a toxic parent.

This list is by no means exhaustive, but those are some examples of phrases toxic parents often use.

If you grew up with a toxic parent, then chances are that you’ve heard at least one of those phrases during your childhood.

Toxic parents use guilt trips, manipulation and other ploys to get what they want from their children.

Sometimes they are being manipulative because they themselves were manipulated by their own parents into doing things that they didn’t want to do.

The biggest effect they have is to make the child feel that they deserve to be treated poorly.

Toxic parents will often say these things right in front of other people—as a way of demonstrating how much power they wield over their children and how much the child needs them.

These phrases are also often said when something bad happens—like when a child gets a poor grade or is in a car accident.

The parent uses it to try to convince their kid that something is wrong with them and will use it as a form of punishment.

They may come out as questions—which makes them manipulative because the child then feels like he or she has to answer truthfully instead of being able to tell the parent “that’s not what happened” without feeling guilty or getting into trouble.

However, sometimes toxic parents won’t phrase these things as questions at all —but rather just as statements.

There is a difference between trying to motivate your children or point out the error of their ways, and attacking them.

There is a difference between encouraging independence and subtly manipulating them.

The important thing to remember is that you do not have to say something hurtful just because you have been hurt.

You do not have to attack just because you feel attacked.

You do not have to make someone else’s life miserable just because your own has been filled with misery.

As parents we are sometimes blinded by our own failure to live up to expectations, or by our own fear of failing, which can cause us to lash out at others.

The most important thing is that you understand what healthy parenting looks like, and that there is nothing wrong with admitting that you might not be doing it right.

There are many ways in which we can fail our children, but one of the most common is by saying things that are toxic.

Some people call these statements “tough love,” as if they were meant as some kind of lesson or guidance; but when they are abusive or manipulative they are actually more akin to verbal abuse than anything else.

If you are a toxic parent, it is never too late to change your ways.

It is never too late to express unconditional love and support toward your child. I

t is never too late to realize that your child deserves to be treated with respect.

If you are a toxic parent, it is also never too late to change your mind about the type of relationship that exists between the two of you.

Learn from your mistakes and do better next time around. 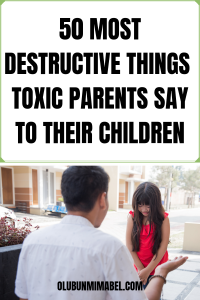