Relationships can be complicated and challenging.

Often, it is difficult to know when the time has come for a breakup or if you should give your partner another chance.

When do ultimatums in relationships become necessary?

What’s the best way to give one? And what happens after giving an ultimatum?

These are all important questions that we will answer in this article as we talk about everything you need to know about ultimatums in relationships, including marriage.

What is an Ultimatum in a Relationship?

An ultimatum is a set of specific conditions or requirements that must be met for you to continue the relationship.

It’s kind of like giving your partner an “or else” statement, which can make it feel very confrontational and lead to arguments.

However, once they are given, there is little room for negotiation; if the conditions are not met, the relationship will come to an end.

This is why it’s important for you and your partner to be on the same page when deciding whether or not this type of communication is necessary in order to avoid arguments later down the road.

10 Clear Signs He Will Never Come Back: 4 Smart Tips for Moving On

People who are dating may also resort to ultimatums when they feel that their partner isn’t willing to put the same effort into the relationship.

For example, if your significant other has been staying out late with friends or not calling often enough, you might use an ultimatum as a way to set some ground rules and get them to start taking your relationship more seriously.

On the other hand, you might also use ultimatums in relationships when you’re ready for a commitment from someone who isn’t there yet. This can lead to a lot of tension and resentment if it goes on too long without either person budging.

In this case, it is best to have a conversation about expectations and where both of you stand before things get too serious in order to avoid an ultimatum later down the road.

Ultimatums are more common in long-term relationships because there is already a level of commitment to the relationship.

They can come up when you want something from your partner that he or she isn’t willing to give, such as increased intimacy, honesty about an affair, or moving out of town.

In this case, there is a lot at stake and one partner may feel like giving an ultimatum is his or her only option to get what they want.

However, ultimatums in relationships should not be used when there are other options.

For example, if your spouse isn’t willing to compromise on the issue at hand and you still want to save your marriage, then it might be time for couples therapy or another form of marital counseling.

This will give both partners a chance to express their feelings and work together on a solution, which is much better than giving an ultimatum that will only lead to resentment. 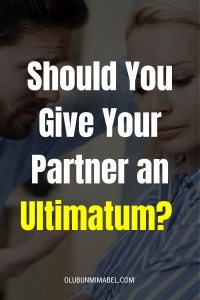 Examples of Ultimatums in Relationships

Here are some examples of ultimatums in relationships:

“You can either stop drinking so much or we’re through.”

“You either commit or we are done.”

”I give you one week to break up with her/him.”

”You have one month to make up your mind about us or it’ll be over between us.”

”I will leave you if I catch you cheating.”

”Either you give me a child or we’re breaking up.”

”Stop talking to him/her or we are done.”

”If you don’t marry me, then I’m not staying with you.”

”I want out of this marriage or else…”

“We will be over if you keep doing that.”

“You need to choose between her and me.”

“Either we go see them together now or it’s over!”

“Don’t bother calling again unless the kids are coming home right after practice/class.”

“If you don’t love me anymore, then tell me.”

”You need to stop smoking or else I won’t stay in this relationship.”

”We are done if he/she is the reason we’re breaking up!”

”Introduce me to your family or I’ll leave you.”

”Let me in on your plans or don’t call me again.”

”Stop being friends with… or it’s over.” etc.

Ultimatums are not a good way to communicate your concerns with someone.

Instead, they can cause resentment and lead to more problems in the relationship.

If you do feel that an ultimatum is necessary, then consider the following:

How To Give an Ultimatum in a Relationship: What to Do When You’re the One Who Gives an Ultimatum

If you feel like your partner is being too wishy-washy about a decision that affects both of you, then it might be time for an ultimatum.

However, before giving one, consider these tips:

“We have talked about kids before, so I’m not budging unless you decide whether or not you’re ready.”

“I want more intimacy from our marriage, so either start opening up when we talk about anything other than work/kids/household chores or move out until things change.”

“The way you treat me is disrespectful and it’s not okay. If you want us to save our marriage, then I expect you to change or else we’re done.”

“Let me know what your decision is by [date/time].” etc.

Also, be prepared for a negative response and know that this might be the end of the relationship even after all your efforts to save it.

If there is nothing more to do other than break up because neither party wants to change their mind about things such as kids/intimacy/respect etc., consider using mediation to help resolve issues before actually breaking up – but ONLY if both parties are willing to work towards a solution as a team and not just one person’s way.

If your partner will only settle for their own terms, then you should follow by them because ultimatums cannot be broken, or else consequences will come into play such as separation.

If Your Partner Gives You an Ultimatum

Don’t let your partner use an ultimatum as a way of controlling you and putting pressure on you.

It’s important that both people feel like they have some control over what happens next so it doesn’t seem like one person has all of the power in deciding whether or not the relationship will continue.

Ultimatums are often used in order to force someone’s hand or get their way.

When this happens, they can be very manipulative and destructive.

However, when done correctly ultimatums can actually benefit a relationship by highlighting what is really important for both parties involved so that the other person knows it too.

The key to creating healthy ultimatums is

knowing how you feel about something while avoiding triggering negative emotions in yourself or your partner,

making sure the request doesn’t take away power from either of you,

being clear on expectations with boundaries around them,

and making sure you can handle the potential outcome of your ultimatum.

Even though ultimatums can be used in relationships, they should only be given when absolutely necessary and there’s no other way out of the situation.

They cannot fix every problem but might help ease some stress off by forcing someone who needs time to think about something into having a decision made right then and there!

Ultimatums are not necessarily bad on their own because many people resort to them as last resorts for making sure everyone involved comes away from an argument/conversation with at least some sense of closure without things getting worse than it already has.

However, giving ultimatums simply for the sake of wanting control over another person or being selfish will lead down a dark path towards resentment.

Having an ultimatum does not mean one person always wins because there are consequences on both sides, and even separation if they’re not used correctly.

Overall, ultimatums in relationships should be a last resort when no other method of communication has worked for the couple and it is necessary to get their partner off their back and force them to make a decision that will benefit both of them! 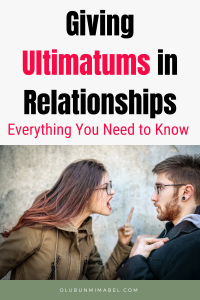