Productivity is the ability to get important tasks done in an efficient and timely manner.

A person who is productive has a high output of work and/or creative material.

In business, productivity is often used as a measure of efficiency.

The more you produce, the more you are able to accomplish in a given amount of time.

This can lead to higher profits for your business.

Now that we have a basic understanding of what productivity is, it’s time to determine what is limiting yours.

Ever wonder why super productive people seem to be brilliant, visionary geniuses?

It’s because they’ve mastered a few daily habits that help them be successful.

A lot of people think that super productive people are incredibly smart, or have some sort of special gift.

The reality is that most of them have great habits, and you can adopt those habits to improve your productivity today.

There are several factors that can reduce your ability to be productive.

Let’s address twelve of these one by one.

12 Daily Habits That Make You Unproductive

1. Not Scheduling Your Day the Night Before

The most common mistake I see people make is they go to bed without having any idea what they’ll be doing tomorrow.

They wake up and either lie in bed or check Facebook, then start reacting to whatever comes up.

Not having a plan for the next day is like trying to drive somewhere with no map – you’re going to get lost, and probably end up in a pretty bad place.

A great way to avoid this problem is to schedule your day before you go to sleep at night.

It doesn’t have to be complicated.

Having this plan in front of you will make it much easier for you stay on track during the day. 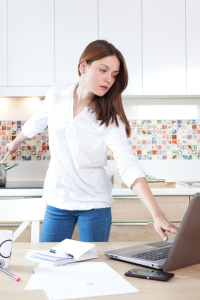 Multitasking is a myth.

It’s impossible to do multiple tasks at once, because your brain cannot pay attention to more than one thing at a time.

When you try to do two or more things at the same time, they both suffer.

If you’re thinking about work while talking with your spouse, neither conversation will be as rich as if you had focused on them separately.

Research shows that multitasking is ineffective and inefficient.

It diminishes your performance, so you end up accomplishing less than if you’d focused on one thing at a time.

It also increases stress, which means higher levels of cortisol circulating around your body.

Not a good thing for your health or for your productivity.

If you find yourself frequently multitasking, try replacing this habit with single-tasking instead.

This means doing one thing at a time without distraction as much as possible.

Treat each task as its own mini project, complete with a start and end time.

You’ll get more done in less time while also increasing your mindfulness, which will help improve your overall sense of well-being.

The problem with this habit is that it requires you to have a constant stream of things in life to blame others for, whether they are real or perceived.

There will always be someone who is not doing what you think they should be doing, and when you find that person you can have someone to blame for your problems.

This will take time away from your day and will lead to negative emotions because you are focusing on something negative rather than the solution to a problem.

This habit is detrimental because if you spend your day blaming others for problems instead of taking steps to solve issues, you will find yourself going around in circles and never getting what you want or need accomplished. 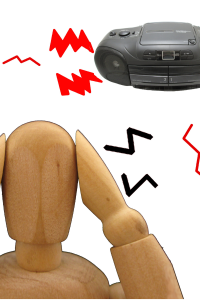 It’s easy to get distracted by the hustle and bustle of life, and little distractions can take your focus off the task at hand.

When you’re trying to write an article or complete a project, turn off the television and close all extraneous windows so there are no unnecessary distractions. 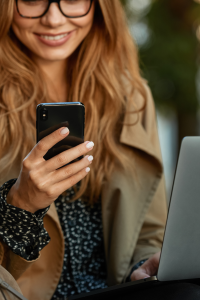 Social media can be an addictive time-suck.

Even if you’re not so addicted that you need to seek professional help, you’re probably wasting at least a few minutes every day scrolling through Facebook or Instagram without accomplishing anything of value.

A big part of the problem with social media is that it is engineered to be addictive.

You don’t have to go far down the rabbit hole before you reach content that is no longer relevant or interesting.

Social media sites are designed to prevent you from backing out by sending notifications and making new posts readily available so that you stay engaged and continue scrolling down the page.

Once you start scrolling, it becomes very difficult to stop.

I’m as guilty as anyone else, but I’ve found that it’s important to either schedule specific times to check social media or avoid it altogether until my work is done.

And if you must check it during the day, at least try doing it in blocks of just 10 or 15 minutes, so you don’t get sucked into a long session of aimless browsing and mindless commenting in which very little gets done.

Social media is not your friend.

It’s a tool for procrastination and distraction, and it will hurt your chances of success in the long run.

There’s nothing wrong with it in moderation, but if you’re spending hours per week on Facebook, Instagram, Twitter or whatever other social platform you favor, it’s time to make a change.

6. Playing Games on Your Phone 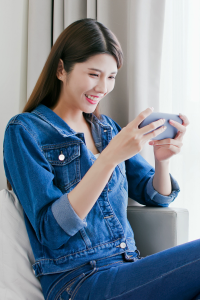 I don’t have any problem with people who enjoy playing games on their phones during downtime.

The real problem comes when someone becomes so distracted by a game that they miss an important call from a client or forget about a deadline for an important project.

It’s too easy to let your mind wander while playing Candy Crush, and before you know it, the day is gone and you’ve accomplished nothing of value. 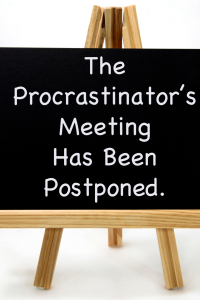 Procrastination is the thief of time.

It is the killer of dreams and hopes.

Trying to be productive when you procrastinate is like trying to drive somewhere when your car has a flat tire.

You can push and push, but it won’t go anywhere.

The same thing happens with productivity when you procrastinate; all that pushing doesn’t get you anywhere.

So, how do you stop procrastinating?

The first step is to realize that procrastination is your system telling you there’s something wrong.

If you’re putting off a task, take a look at it and try to figure out what the problem is.

Is the task too big?

Break it down into smaller pieces and do them one at a time.

Is the task boring?

Is it something you really don’t want to do?

Remind yourself why it needs to be done and then get on with it.

Procrastination is a habit, so just like any other habit, you can learn how to break it.

You might think that by being productive for hours on end, you’ll accomplish more.

In reality, however, working at maximum capacity for long stretches can be detrimental to your productivity.

Trying to do too much at once can lead to burnout, which is characterized by an overwhelming sense of exhaustion and frustration.

When you burn out, it’s difficult to work effectively, even if you have the energy to do so.

There are certain things that are important to plan ahead, but the rest of it?

If you’re one of those people who loves to map out their entire day, week or even month, I’m sure you’ve experienced this first hand.

You get started on your task list and start feeling exhausted while completing tasks that should have taken a five minute time span.

This is due to the fact that we overestimate our ability to finish tasks and underestimate how long they take us.

By planning too much ahead, we set ourselves up for failure because many things don’t go according to plan.

10. Worrying About The Future

Does worrying about the future ruin your productivity?

For many people, worrying doesn’t stop at the end of the workday.

When you worry, you are never present in the moment.

This is bad because when you are worried about the future, you are missing opportunities to be happy right now.

The more you can focus on the present moment, the better your life will be.

Keeping your mind in the present allows you to enjoy what is happening in your life now instead of letting your thoughts jump ahead to what might happen tomorrow or next week.

How often do you say yes to things that you don’t want to do?

Most of the time we say yes to things we don’t want to do.

We feel guilty for saying no and think that if we don’t help people out, people won’t like us.

Saying no is hard, but it’s necessary to stay productive.

You can’t get everything done if you’re busy doing things you don’t want to be doing. 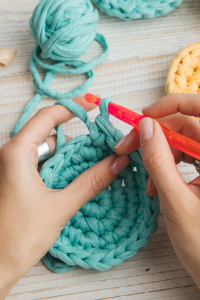 I’ve seen too many people ruin their productivity by doing nothing but work.

When they come home, they think “I’ll just check Facebook for a few minutes.”

Before you know it, it’s 11:30 pm and they still haven’t done anything except sit around and “chill”.

Hobbies bring joy and fulfillment into your life.

And they can also increase your productivity.

They allow you to take breaks from work and recharge your batteries.

So how do you find time for a hobby?

Decide what type of activities you enjoy.

Some people like to work on cars, others enjoy knitting.

Think about the things you enjoy doing and see if there is something you would be interested in doing more frequently.

Maybe it is photography or dance classes or playing an instrument.

Whatever it is, try something new and make sure it’s a hobby that challenges you but doesn’t require too much focus so that you can use it as a break from work.

Make time for it.

Okay, so this is where most people fail.

You may have decided on a hobby but making time for it is another thing altogether.

It takes effort to carve out time to enjoy your hobbies.

You’ll be much more productive if you have a hobby.

It doesn’t matter what that hobby is as long as you enjoy it.

Do it every day or on days you find suitable, and you’ll see your productivity skyrocket.

Calling yourself out on unproductive habits is the first step to breaking them.

It’s about knowing what habits are holding you back from being your most productive self and then doing something about them. 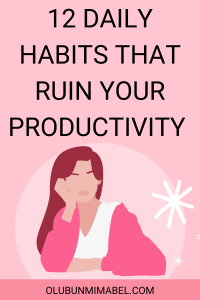