How to give a guy your number without looking desperate?

Giving out your phone number is a big deal.

It’s the first step in getting to know someone and moving things forward.

But it can also be scary because it means putting yourself out there, and sometimes you’ll get rejected.

First, let’s look at what it means to be desperate.

Being desperate is when you’re so anxious that you’ll do anything just to have a guy notice or talk to you.

It’s having no boundaries, no self-respect, and feeling like you need a man so badly that you’ll do anything he wants.

If you want to know how to give a guy your number without looking desperate, start by following these rules:

How To Give a Guy Your Number Without Looking Desperate 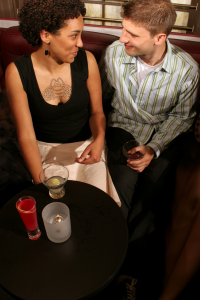 If he doesn’t show any interest in you, there’s no point in giving him your number because he probably won’t call anyway.

But it’s easier to know how to give a guy your number without looking desperate when the guy shows a bit of interest in you.

He’d appreciate that you saved him the work of asking for your number.

The key is to observe the signals that he’s interested in you.

Some examples of these signals are:

-He smiles at you

-He stands close to you or tries to get your attention

-He flirts with you

But if he’s not showing any interest, then don’t do anything.

Just wait and see what happens. 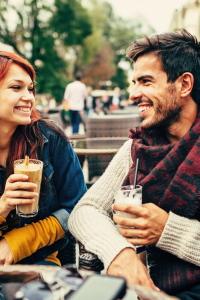 When you smile, it conveys that you’re confident and happy.

And when you laugh, it shows that you’re fun to be around.

You can say something like, “I had a great time talking to you. Here’s my number in case you want to grab coffee sometime.”

The most important thing is to be confident when you want to give a guy your number without him asking.

Remember that you’re an amazing catch, and you have a lot to offer, and let yourself shine.

If you don’t believe in yourself, then he won’t either.

Be confident but not cocky, and be yourself.

If you’re authentic and genuine, he’ll be able to see that, and he’ll be more likely to want to talk to you again.

Sometimes the best way to give a guy your number without looking desperate is to just be direct.

You can say something like, “I’m enjoying talking to you. I think we should grab coffee sometime. Here’s my number.”

Keep it short and sweet.

Don’t say too much.

5. Ask him a simple question 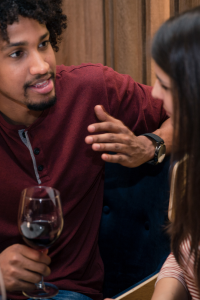 If you’re interested in someone and you want to give them your number or get theirs, asking them a question is a great way to do it.

You can ask them what they do for a living, how their day is going, or what kind of music they like.

Doing this with a guy gives you a chance to start a conversation, showing that you’re interested in getting to know him better.

Plus, it’s a great way to segue into giving him your number.

Asking a simple question will instantly give you the opportunity to find out if there’s any potential for an ongoing conversation.

6. Be casual about it 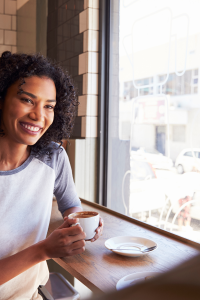 Being casual about it shows that you’re not desperate and relaxed.

If you act like it’s some big deal to give someone your phone number — like he’s won the lottery or something — then he may assume that you don’t do this often (and therefore must be desperate).

Instead, act like it comes naturally for you to share your digits with people, so they know it’s not an uncommon occurrence for you.

You can say something like, “Oh hey, let me take down your phone number,” or “I don’t want to forget this,” as if it were an afterthought and not something you’ve been planning to do.

This also shows that you have a life outside of dating and that you’re not just looking for a guy to fill a void.

Guys want to date someone who is independent and has a life outside of them.

Show that you’re that kind of girl by being casual about giving your number.

7. Make him call your phone

You can ask him to please help call your phone if you can’t locate your phone.

This way, your number is stored on his phone, and you have his too.

It’s a simple way to ensure that you both have each other’s numbers without looking desperate.

Also, it’s a clever way to make him feel needed and useful, which will score you some major points.

8. Give him your card

If you’d rather take things slow and build up some rapport first, try giving him your business card instead of asking for his number directly.

It should be an actual card (not just folded paper) because it will show more thoughtfulness than just scribbling down your digits on a napkin or whatever else is handy at the moment (which is also fine) if you don’t have a business card.

If he doesn’t have one, offer yours in exchange for his number instead of giving yours directly.

That way, if he doesn’t call, he’ll know where to find you if he wants more contact information later on down the road.

This is an oldie but a goodie.

Make sure you always have a pen on you so that when the opportunity to give your number presents itself, you’re prepared.

It shows that you’re organized and ready for anything.

Plus, it’ll make you look more put together than someone fumbling around for a pen when they could have easily had one at the ready.

11. Use humor as an icebreaker 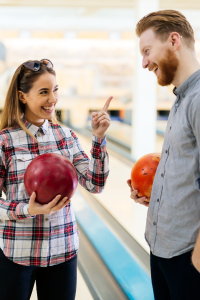 If you’re nervous or unsure of how to approach the guy or if you don’t know what else to say, try cracking a joke instead of asking him directly for his number.

Humor is always a lifesaver!

This is especially good if he seems shy or if he seems like he could use some extra encouragement to open up more (like if he’s sitting alone).

This will allow him to see your personality and sense of humor without any pressure on either part!

Hopefully, this leads to more conversation, and you can ask if he would like your number so that he can text/call you sometime.

When you want to know how to give a guy your number without looking desperate, it’s important to remember that you shouldn’t do all the work.

The guy should also be putting in some effort.

For example, you can say something like, “I’m thinking about going to this new cafe on Saturday.

If he’s interested, he’ll take you up on your offer and ask for your number so that he can confirm the plans with you. 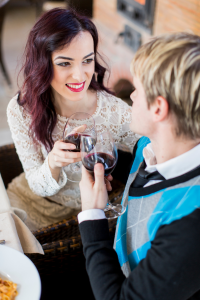 You might think that being too flirty will make you look desperate, but that’s not necessarily true.

Sometimes, a little bit of flirtation can go a long way.

It shows that you’re interested and confident, two qualities that are very attractive to guys.

So, don’t be afraid to bat your eyelashes, touch his arm, or compliment him on something!

Just make sure that you don’t come on too strong because that might scare him off.

14. Make sure you’re ready to give your number out

This may seem like an obvious one, but it’s important to make sure that you’re ready to give your guy your number before you do it.

You should only give your number to someone when you’re sure you want to talk to them again and potentially pursue something further.

Otherwise, you’re just setting yourself up for disappointment (and a lot of awkwardness).

Learning how to give a guy your number comes with practice.

The more you do it, the easier it will become.

You can also try role-playing with a friend or family member.

Think about different scenarios and how you would handle them.

The more prepared you are, the more confident you’ll feel, and the easier it gets.

Now that you know how to give a guy your number without looking desperate put these tips into practice and see how they work for you.

What Do Guys Think When You Give Them Your Number?

What a guy thinks when you give him your number depends on the guy himself. Some guys might think it’s a confident move and a clever way to get his attention, while others might see it as a green light to start hitting on you.

But most guys are usually more than happy to give out their phone numbers because they’re so used to getting them from girls.

So an average guy will not think you’re too forward by giving him your number — as long as you phrase it in a way that doesn’t make it seem like you just want to hook up with him.

Anyway, forget about what guys think.

You are not a mind-reader; you can’t always know what a guy thinks until you interact with him.

The most important thing is how you feel about giving your number to a guy. If you’re comfortable with it and you’re doing it for the right 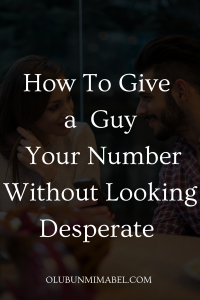