What are the signs he is hurting after the breakup?

You’re in a relationship, and you love your partner.

It’s been going on for a while, and you’re thinking about taking the next step in your relationship.

But then, one day, something changes.

But either way, the argument ends with one of you saying those dreaded words, “we need to talk.”

You sit down and start talking about why things aren’t working anymore.

As the conversation goes on, it becomes clear that there is no way to save this relationship.

You both agree that it’s over, and there’s no going back.

It hurts like hell when you break up with someone — for both of you.

And whether or not he admits it, it will hurt him too.

No matter how much he tries to convince himself that he’s okay with the breakup, deep down, he knows that you were important to him at one point in time.

And that all those feelings are still there somewhere in his heart.

A breakup is as difficult for men as it is for women.

The same emotions that cause women to feel sad or depressed when they break up can be just as powerful for men.

12 Signs He Is Hurting After The Breakup

1. He Is Very Quiet And Losing Interest In Life 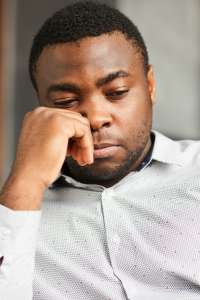 It’s not unusual for people to withdraw from life after a breakup.

If your ex used to be the life of the party, but now he’s a shell of his former self, he’s hurting.

He doesn’t want to see or talk to anyone.

He just wants to be left alone.

He feels like he has lost everything, and he doesn’t know how to cope with it.

He may be having trouble functioning normally because he is preoccupied with thoughts about the breakup that nothing else seems important.

2. He Starts Eating or Drinking Excessively 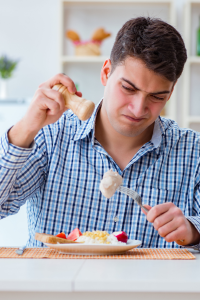 Alcohol and food can be coping mechanisms for people struggling to deal with their emotions.

I can relate to excessive eating when you are brokenhearted.

I felt betrayed by someone who used to be a close friend some months ago, and I found myself eating more than usual.

The experience made me understand why people binge-eat in movies when their lovers break up with them.

I didn’t get heartbroken by guys; it’s always been females I called friends.

Anyway, I’m just trying to say I can relate to this point.

So, if you notice your guy indulging in unhealthy behaviors like binge drinking or overeating, it’s a sign that he’s not dealing with his pain in a healthy way.

3. He Has Become Angry And Violent 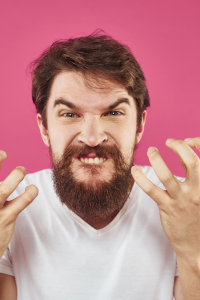 Breakups can bring out the worst in some people.

If your ex is so upset about the breakup that he starts lashing out at you or other people, he’s surely hurting.

It’s normal for people going through a painful event such as losing someone close to them to become more aggressive or irritable than usual.

Plus, men often become angry when they have feelings of rejection.

4. He’s stopped texting as much or at all

If he used to text you all the time and now it seems like he has disappeared, this could mean that he is hurting after the breakup and wants some space from you so that it doesn’t hurt so much anymore.

My ex stopped texting me when I broke up with him.

I understood he was hurting after our breakup.

Keeping in touch would only give him false hope.

So, if he has stopped texting you, he’s heartbroken over the end of your relationship.

5. He’s Trying To Make You Jealous

An ex who is over you and your relationship will not care about making you jealous.

But an ex who is still hurting after your breakup will want to show you how happy he is without you.

He might start posting pictures of him having fun with his friends or with a new woman.

He might even call you to hint about how his life has improved since you broke up with him and what you are missing.

The main goal of all this is to make it look like he has moved on and that he doesn’t care about the breakup at all.

6. He Keeps in Touch With Mutual Friends

If he talks about you, your relationship, and the breakup with mutual friends, it’s a sign he might be hurting.

Talking about the breakup with mutual friends is a way of expressing his hurt.

This is especially true if he’s saying hurtful things about you.

He may also ask your mutual friends about your relationship status or try to find out whether or not things are going well for you without seeming too obvious about it.

7. He changes his routine 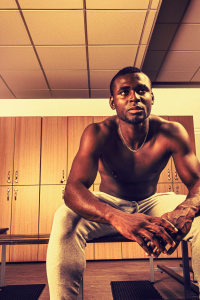 He starts working out obsessively, or he completely abandons his fitness regime.

He hooks up with someone new, or he swears off dating altogether.

Whatever his routine was, a sudden change in routine is often a sign that a person is struggling to cope with a broken heart.

So if he’s doing the opposite of what he’s used to doing after the breakup, he’s hurting.

8. He’s having trouble sleeping or sleeping too much 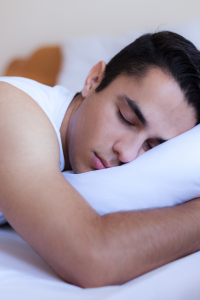 It’s common for people who are grieving to have trouble sleeping.

If he is having trouble sleeping and he cannot stop thinking about the breakup, then this is a sign that he is hurting after the breakup.

If your ex isn’t as interested in his appearance anymore, then it may be because he doesn’t care how he looks to other people.

This is a sign that he had been trying to impress you before the breakup, and now that you’re gone, there’s no point in trying anymore.

10. He Calls Or Texts You, Then Says It’s A Mistake

This is a common reaction after a breakup.

He may just be trying to get closure or feel better about himself by hearing from you.

However, if he keeps calling or texting you and then says it was a mistake or that he shouldn’t have done it, this is a sign that he still has feelings for you and is hurt about the way things ended between you.

11. He Keeps Checking In On You To See What Else Is Going On In Your Life

If he’s constantly asking you how things are and what you’re up to, it might be because he’s hurting and wants to know if you are still hurting too.

It’s normal for people who’ve gone through a breakup to want to know what their ex is up to.

So if he’s still checking in with you after months of being broken up, then there’s a chance he still has feelings for you.

He might want closure or validation that it’s really over between the two of you, and it is a big sign that he is hurting after the breakup.

12. He Is Always Looking At Your Social Media Profiles

But why would he want to keep an eye on your social media profiles?

Well, there are several different reasons for this.

But if he is hurt after the breakup, then it is likely that he wants to know if you have moved on yet.

13. He Tells You He Misses You

When your ex-boyfriend tells you he misses you, it’s a sign that he’s hurting after the breakup.

When a relationship ends, we tend to retreat into ourselves and focus on our own needs.

This can leave one feeling lonely and depressed, which leads one to wish that one could go back in time.

When your ex tells you that they miss you and wish things could be different between the two of you, it means he is still thinking about what could have been instead of focusing on the present or future.

He may also be using this as an excuse to get back together with you so that he doesn’t feel so lonely anymore.

Ultimately, whether or not your ex-boyfriend is hurting will depend on him.

If he was truly invested in your relationship and had genuine feelings for you, then yes, he probably is going to be hurting.

But at the same time, everyone deals with breakups in different ways, so it’s hard to tell.

No one can truly know how your ex-boyfriend feels without asking him outright because what you see on the outside isn’t always representative of what’s happening on the inside. 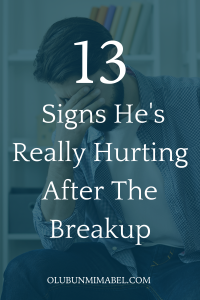