The moment you find out that your boyfriend is cheating on you will be one of the worst experiences of your life.

It is a devastating moment, especially if he has been lying to you for months or even years.

You will feel betrayed and angry, but at the same time, you will want answers as to why he did it, who he is cheating with and what you can do about it.

You need answers, but most importantly, you need closure, and letting him know how much pain he has caused you will help you get there.

These painful messages can help you do just that because they will allow you to express yourself without holding anything back and even move on.

Here are 22 painful messages to a cheating boyfriend that will help you get out of the relationship and make him realise how much he has hurt you.

22 Painful Messages To a Cheating Boyfriend

1. “You’re a cheater and a liar. You don’t deserve me or my love. You broke my trust, and you hurt me. I gave you everything, and you threw it away. You’re nothing but a coward. You’re not man enough to own up to your mistakes and take responsibility for your actions. You’re pathetic, and I deserve better. I hope you rot in hell for what you’ve done to me. You’ll never be able to fix what you’ve broken. I hope you realize that, and I hope it haunts you for the rest of your life.”

2. “You don’t deserve me. You really don’t.  Well, I’m done with you. I deserve better than someone who would cheat on me and lie to me. I deserve someone who will be honest with me and love me for who I am. So, goodbye. It’s time for me to move on and find someone who deserves my love.”

I don’t know how long you’ve been cheating on me, but I want you to know that I am leaving you. I don’t need this drama in my life, and I don’t need to be with someone who doesn’t respect me enough to be honest with me. You need help, and I hope you find it.” 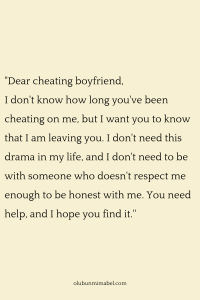 4. “I trusted you, and I thought we had something special. I was wrong. I’m not going to pretend that I am not hurt because I am. I’m not going to pretend that I don’t feel betrayed, because I do. But I am going to move on because I deserve better. I deserve someone who is honest and loyal and who will never make me question how I feel about them. I deserve someone who loves me for who I am, not what I can do for them. And I know that person is out there, waiting for me. So goodbye, and good luck finding what you’re looking for.”

6. “I am not a fool for trusting you; you are a fool for betraying my trust. So you didn’t fool me; you fooled yourself.” 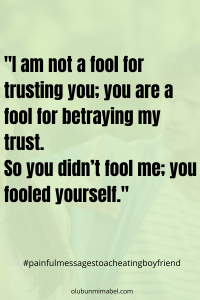 8. “I was blind to your faults, and I ignored all the warning signs, but I’ll never make that mistake again. You’re not worth my time or energy, and I hope you change your ways before it’s too late.”

9. “I want you to know that I’m moving on from this, and I’ll never look back. You meant nothing to me, and I hope you realize what a mistake you made in cheating on me.”

10. “Real men don’t cheat. They’re honest, they’re loyal, and they have integrity. Cheaters are nothing more than cowards who are too afraid to be honest with themselves and their partner. They’re pathetic, and they don’t deserve anyone’s love or time. Are you a real man? Oh, sorry, I forgot you are a cheater, coward!” 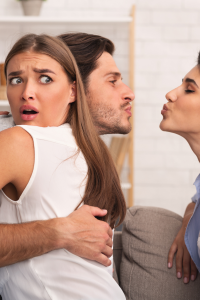 I just wanted to let you know that I have completely moved on from you and our relationship. If this doesn’t hurt, I hope it at least makes you think because, trust me—you messed up.

I truly do not regret the time we spent together, but I am moving on. I’m glad that this happened when it did because now I know what a jerk you are and will never have to worry about being played a fool by you again.

You meant nothing to me, even though I thought you did at the time, and now that I’m living my life without you, it’s so much better than how things were before.

You were a waste of my time and energy. I wish we hadn’t been together for as long as we were because you were probably the worst boyfriend anyone could ever have. I can’t believe that someone as great as me could be treated so poorly by someone as awful as you were.

But maybe someday, when your heart is broken into a million pieces, you’ll remember how badly you treated me and how good of a girlfriend I was to you, even though you never deserved it.

Then maybe we’ll be even, and the pain will be gone from both of our hearts.”

12. ”You’re not the kind of guy I thought you were, and to be honest, I’m glad you’re out of my life. You were only a temporary happiness that I was too blind to see. I’ve realized a lot about myself through this whole experience. Now I know that it’s better to be alone than with someone who doesn’t care about me. I hope one day you regret everything you did to me and realize what an idiot you’ve been.”

14. ”I hope you meet your kind. You know the type. The one who cheats on you and then expects you to take them back. The one who thinks infidelity is normal and acceptable, but when it happens to them, they are shocked and appalled. The one who doesn’t see that their actions have consequences or consider the emotional toll they put on others.”

15. ”You have been a complete waste of time and effort. I am glad that I found out about your cheating ways before it was too late. It is better to know this now than later when we would have been married or had kids together. Lucky me!” 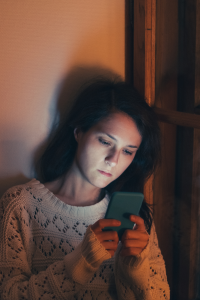 16. ”You are not the man I thought you were. Your actions prove that you’re a coward who doesn’t care about anyone but himself.

I want a man who treats me like a queen and respects me despite my imperfections. It’s pathetic that you’re so insecure about yourself that you would go behind my back rather than tell me what’s going on with us as a couple.

I have no respect for someone who would treat another person like garbage just because they might not be perfect in every way or live up to their standards.

That is not how a real man behaves.

A real man doesn’t cheat on his girlfriend just because he wants something new after dating her for a few months.” 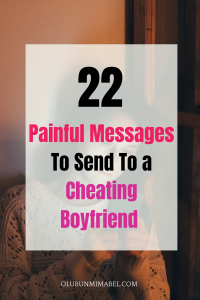 I’m not angry; I just don’t trust you anymore.

You cheated on me, and I’m not interested in someone who can’t be faithful to the one they claimed they loved so much.

My trust died with you when you decided to have an affair with another woman behind my back. You are no longer the man I fell in love with but a liar who lies about cheating on his girlfriend.”

19. ”I don’t know how many times I’ve forgiven you for your mistakes and wrongdoings, but this time it’s too much for me to take. You’ve hurt me too much already, and this time there’s nothing left inside me to give you another chance at redemption because deep down inside, I know that you’ll always end up doing the same thing again and again until we break up for good.”

20. ”I thought that we were happy. I thought that our relationship was strong and good. But now, I see that all of this was a lie. You were cheating on me with some other girl behind my back. You made me feel like everything was okay, but it wasn’t okay. You were lying to me the whole time, and now I can’t believe it.

There is no reason for me to be in love with someone who doesn’t love me back. So now I’m going to leave you alone forever and find someone who can care about what happens to me instead of only caring about themselves and their desires.”

I thought about our relationship and how it all went wrong. I can’t help but think about all the promises you made to me and how you broke them. You promised me that you would never cheat on me, but what did I get instead?

You said that you loved me so much and would never want anyone else but me in your life, but here we are now…

In case you didn’t know, this relationship is over.”

22. ”Hey, I don’t know what your plan is. If you have another woman in mind, do what is best for you. But I have one thing to say to you. You don’t deserve someone like me.

You don’t deserve to be with me because you can’t even make up your mind about who you want to be with. You are not the kind of guy that would stick with one girl forever. You are a player, and you will always be a player. So why should I waste my time on someone like you?

I am done with this relationship.” 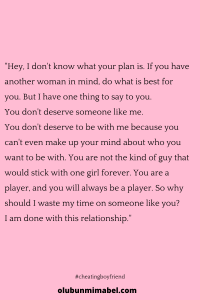