An older man is pretty much the same as he was in his 20s — except now he’s probably got more money, experience, and power and has been married before or had serious relationships.

So you indeed need to know how to tell if a man over 50 likes you.

I understand that people are different and might not act in the same ways when in love, but generally, these are common signs an older man likes you:

How To Tell If a Man Over 50 Likes You

1. He hangs around longer than usual

An older man is probably looking for someone to spend time with who can keep up with him mentally and physically.

So, if he’s sticking around after your date or conversation longer than usual, it’s a good sign that he likes you.

He might find your company interesting and enjoys talking to you.

This is very true, especially if you are smart and bubbly.

2. He compliments you a lot

Older men are usually more secure in themselves and are less likely to be concerned about what other people think of them.

That means they’re more likely to give genuine and sincere compliments.

He might compliment your hair, outfit, smile, or even the way you carry yourself.

He’s trying to let you know that he notices you and approves of what he sees.

So, if you’re getting a lot of compliments from a guy over 50, it’s a good sign that he likes you.

3. He asks a lot of questions about your life

This is one of the signs that a man over 50 likes you.

He’s interested in getting to know you better and sees the value in learning more about you.

He’s not just asking questions out of polite conversation; he genuinely wants to get to know you better and is not afraid to ask the tough questions that will help him learn more about you.

So if you’re wondering whether or not a man over 50 likes you, pay attention to how much he asks about your life.

4. He dresses to impress you and makes sure that he looks good for your date This is another one of the signs a man over 50 likes you.

If he’s taking the time to make sure that he looks good for your date, he wants to make a good impression on you.

He wants you to see him at his best, hoping you’ll be impressed by his appearance.

He knows you see younger guys in great shape and dress well, so he’s trying to compete with them for your attention.

5. He asks about your life goals and dreams

Men over 50 are often career-driven and may not have much time for dating, so they’ll want to know what’s most important to you and whether or not your goals and dreams align with their own.

If a man over 50 is interested in you, he’ll want to know what you want out of life and whether you’re looking for a long-term relationship or something more casual.

He’s trying to gauge your commitment level and wants to ensure that you’re on the same page before things get too serious.

6. He always calls when he says he’s going to call

This is one of the signs a man over 50 likes you.

Older men have no time for games, and they’re not going to play them with you.

If he says he’s going to call, he will call.

He doesn’t want to waste his time or yours, so he’s not going to make promises he can’t keep.

He knows that communication is important in any relationship, so he’s ensuring that he stays in touch with you and keeps you updated on his plans despite how busy he is.

7. There’s a warmth in his eyes when he looks at you This is one of the signs a man over 50 likes you.

When a man over 50 likes you, there’s a warmth in his eyes that betray his true feelings for you.

He might not say it outright, but you can see how he looks at you.

There’s a softness and a tenderness there that he reserves for only the people he cares about most.

So, if you catch him looking at you with warmth and affection in his eyes, it’s a pretty good sign that he likes you.

This warmth comes from a place of happiness and excitement and shows he loves being with you.

8. He includes you in his plans

When a man over 50 includes you in his plans, he wants you to be a part of his life.

He’s not just trying to impress or win your approval; he wants you to be involved in his life and share his experiences.

He’s not afraid to let you into his world and wants you to be a part of it.

9. He tries to make you laugh A man interested in you will do everything he can to make you laugh.

He knows that laughter is the way to a woman’s heart, and he’ll go out of his way to crack jokes and tell funny stories.

Being an older man, he probably has a lot of life experiences to draw from, and he knows how to use humor to his advantage.

If you find yourself regularly smiling and laughing around him, it’s a good sign that he’s interested in you.

After all, who doesn’t enjoy making the object of their affections laugh? Older men are often more chivalrous than their younger counterparts and are not afraid to show it.

If one is interested in you, he’ll open doors for you, pull out your chair, and help you with your coat.

He knows how to treat a woman with respect and wants to make sure you feel valued and appreciated.

11. He’s interested in your mind and not just your body

A man over 50 interested in you will want to know more about your thoughts and opinions on various topics.

He’s not just interested in your superficial qualities; he wants to know what makes you tick.

He’s curious about your life experiences and wants to learn more about the important things to you.

He knows that a relationship is more than just physical attraction, and he wants to ensure a deeper connection between you.

An older man who is only after your body will not be interested in getting to know you on a deeper level.

He’s only lusting after you.

12. He gives you good advice

He’s been around longer than you, so you know that when he gives you advice, it’s worth listening to.

He’s not going to try and tell you what to do – instead, he’ll offer his opinion on a situation based on his extensive life experience.

And more often than not, his advice will be spot-on.

You believe he’s a great sounding board when you’re struggling with a decision because you know he’ll give you an honest opinion.

His taking the time to offer up his wisdom shows that he cares about you and wants to help you.

So if your guy over 50 is giving you good advice, it’s one of the signs that he likes you.

13. He is protective of you

If an older man starts to act like your protector, it’s one of the signs he has feelings for you.

It doesn’t matter if you can take care of yourself or not.

If he feels the need to help you, it means he cares.

He might offer to carry your groceries or walk you to your car at night.

He wants to ensure you’re safe and sound and takes your safety seriously.

The fact is, older men who are serious about you know what they want in a partner.

They usually express their interest through actions and not mere words.

So, if an older man treats you in these ways, he likes you! 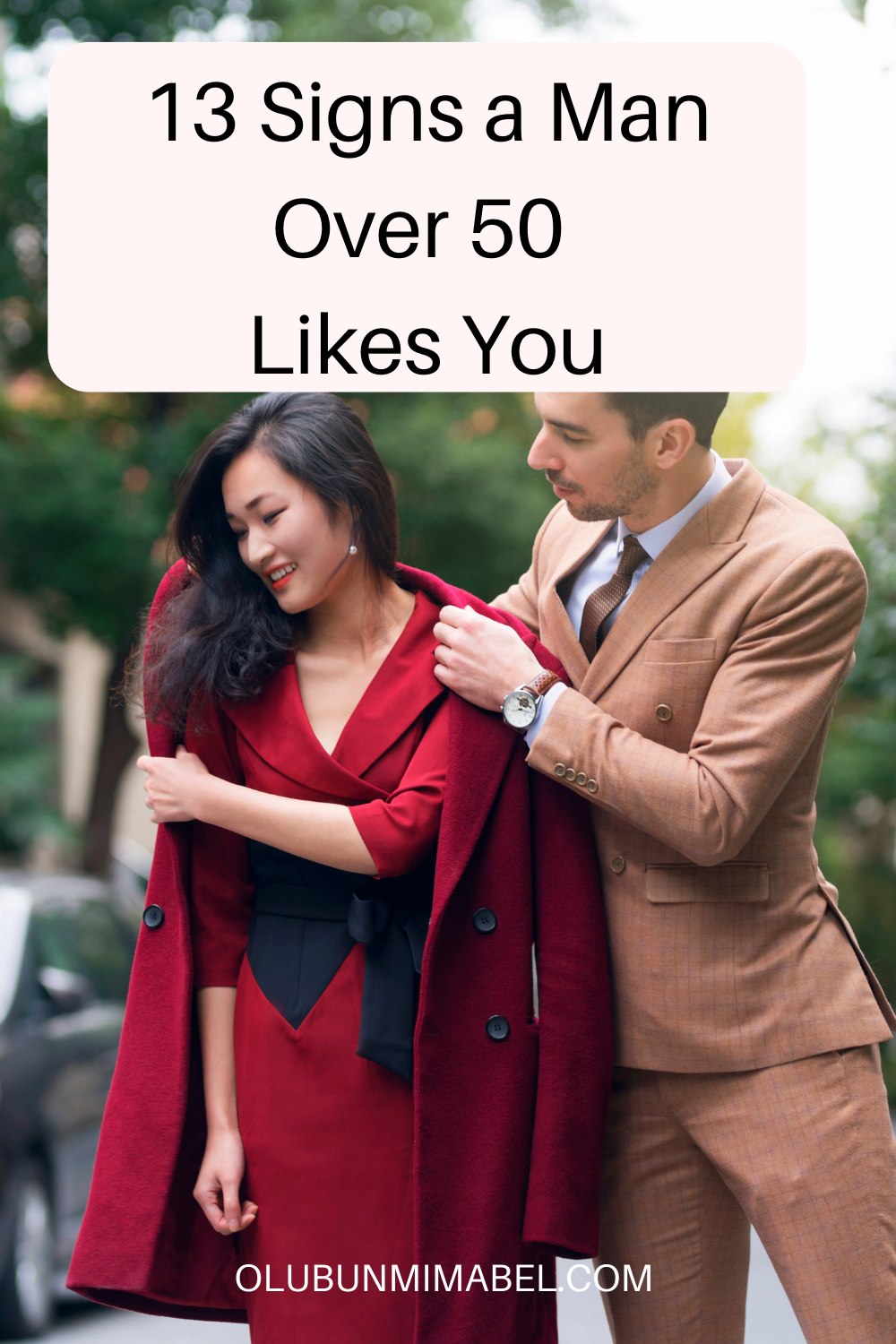