”My husband says his money is his!”

So your husband says his money is his.

He’s adamant about it.

He doesn’t want you meddling in his finances or asking him where he spends every penny.

You’re not sure what to make of it – is he trying to keep you out of the loop, or is he just protecting his own privacy?

If you’re married, then you know the importance of communication.

And if there’s one topic that’s always bound to cause some disagreement, it’s money.

Money is often seen as a very personal thing – after all, it represents what we’ve worked for and saved.

So when your spouse says, “money is mine,” it can be a little annoying.

But what does that even mean?

Should you have a problem with your husband saying his money is his?

If you’re struggling with this issue in your own relationship, read on for some helpful tips.

What do you think of when your husband says “my money is mine”?

Most of us immediately think of money as representing our hard work.

We often put in long hours at the office, and we might even take extra shifts on weekends – all for that little bit of extra cash!

Of course, some people struggle with feeling a sense of ownership over their paycheck.

When you hear your husband say that his money is his, what do you think of it?

Do you take it as a sign of secrecy and mistrust or something else entirely?

Your husband may feel that he has to protect his privacy.

Perhaps he was raised in a home where privacy was just as important as other values, and you might find that it carries over into his adult life.

Or maybe he was cheated on or betrayed by someone who had access to all of his information.

Whatever the reason, he may feel it’s his responsibility to keep things private.

When your husband says “my money is mine,” he could be saying that he wants to make his own decisions about how to spend it.

Some men don’t want their wives interfering with their expenses – they might even resent it.

Trying to pry into your partner’s spending habits can lead to arguments and might affect your relationship in a negative way.

It’s important to remember that just because someone says something about themselves or their belongings, that doesn’t mean they’re trying to hide anything from you.

Your partner might be secretive about his income, but that doesn’t mean he is doing something wrong.

It could be that your spouse is just very cautious when it comes to his privacy.

3. This could be a red flag

While trying to understand why your spouse says “my money is mine,” keep in mind that this could also be a sign of financial infidelity or mistrust.

This may seem like an unlikely scenario, but it’s important to remember that even if you trust each other completely, it still doesn’t mean that you can’t discuss your finances together.

In some cases, a man who says his money is his may be hiding something big – like credit card debt or even gambling addiction.

This can be hard on a relationship because you might feel betrayed by the fact that he lied to you.

If your relationship is solid and you trust each other, then it’s possible that he says his money is his because he doesn’t want to be controlled or criticized by you.

You might have a problem with impulse spending, so he could feel protective of his cash.

But remember, this could also signal an issue – if he won’t share expenses or be involved in household budgeting, then this could cause problems down the road.

What are some things you can try?

”My Husband Says His Money is His”: What To Do

1. Review each other’s perspective on money

To help you understand your spouse’s approach to money, talk about how you were raised.

What was the value system in your home and in his?

You might be surprised to learn that what seems normal or logical to you could be very different from the way he perceives things.

People have different views when it comes to money matters.

Some people are very honest in sharing their earnings with their partners while others don’t even want to know how much the other person earns.

2. Ask questions instead of assuming

Next time your husband says “my money is mine,” ask him why he feels that way.

You might find out something interesting about your spouse or the history behind his approach to money.

For instance, you might learn that he’s uncomfortable with you seeing every transaction on his credit card statement.

If you’re feeling resentful about your partner’s handling of money, don’t let it build up until you blow up at him.

Talk about it as soon as possible, and come to a clear agreement on how you’re going to handle finances going forward. Set a budget and stick to it.

It’s possible that he was hiding things from you because he didn’t want to disappoint you – but this behavior can lead to even more problems down the road.

4. Make sure your goals match up

If you want to save for a house and he wants to travel the world, that’s going to lead to conflict.

Sit down at the beginning of your marriage (or as soon as possible) and talk about what your financial goals are — short-term and long-term. Then adjust your spending habits accordingly.

Since lack of transparency can lead to financial infidelity, you should encourage your spouse to be more open and honest with you.

And prove yourself trustworthy in return.

The more insight your spouse has into your spending, the less likely he is to feel that his privacy needs have been violated.

6. Don’t nag or compare your spouse to other couples

Don’t judge your husband or your marriage based on what other couples do.

Just because your friend goes over her credit card statements with her husband every month doesn’t mean that you should do the same.

Focus on your marriage and what works for you.

If you want to be involved in managing the household budget, then start earning your own income.

This can help you feel more independent and less reliant on your husband for financial stability.

Once you have your own source of income, you can make decisions about your spending.

It may seem obvious, but the most important thing you can do to help your relationship is to have a career of your own and make your own money.

There is no hard and fast rule for couples to follow when it comes to money matters.

Every couple has their own way of dealing with this issue.

And just because your husband says “my money is mine,” doesn’t mean there’s anything wrong with your marriage.

If you’ve had some honest conversations about why your spouse thinks his money is “mine” and there still seems to be an issue, it’s important to respect his privacy.

If you feel like your husband isn’t being honest with himself or you, then it could be time to seek help through therapy or counseling. 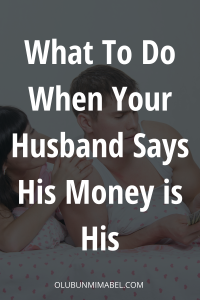 15 Your Husband Loves You Deeply

”I’m Embarrassed By My Husband’s Looks”

”My Husband Doesn’t Compliment Me”