”Should a husband give his wife spending money even if she works?”

There is a lot of debate surrounding whether or not a husband should give his wife spending money, even if she is employed.

On one side of the argument, some people believe that the husband should handle all of the household finances and that the wife should not have any independent money of her own.

Other people believe that the wife should be given an allowance, regardless of her employment status, to allow her to purchase personal items or enjoy some occasional leisure activities.

So, what is the right answer?

Should a husband give his wife spending money even if she works?

What is The Husband’s Reasoning for Wanting to Give His Wife Spending money?

Some husbands may want to give their wives spending money as a way of helping out around the house.

If the wife is caring for the children and doing all of the cooking and cleaning, it can be difficult for her to also hold down a job.

Having an allowance might allow her to pay someone else to do some of those tasks so that she is able to focus on her obligations outside of the home.

Also, some men give their wives spending money as an expression of love and appreciation.

They may feel that showing how much they love their wives with material gifts will help to strengthen the emotional bond between them.

What is The Wife’s Reasoning for Wanting an Allowance?

Some wives desire a spending allowance because they want to maintain some degree of independence.

There are many women who still do not work and prefer to stay at home taking care of their children or homes; however, there are also a large number of women who do work and need additional resources in order to survive.

By creating an allowance for the wife, she will be able to purchase groceries as well as pay other household bills if needed.

In addition, it could also give her the ability to take care of other things that are important to her such as her nails, hair appointments, and spa treatments.

Some women might agree that they do not need a spending allowance in order to survive, but still desire one.

One potential argument for giving an allowance is that it can be an efficient way of showing appreciation and gratitude for the work that a wife does to maintain the household.

For some women, receiving an allowance from their husbands allows them to feel more grateful for what they have and what they do to contribute to the household.

They might feel as though their efforts are not always recognized, so having an allowance could be a way of giving them something that says “thank you”.

What Are The Possible Arguments For NOT Giving An allowance To The Wife?

On the other side of the argument, some people believe that a husband should not give his wife spending money because it might damage their marriage and create unnecessary problems between them.

For example, if a man gives his wife more money than he can actually afford, he might not have enough money to cover upcoming bills or other expenses that he needs to pay.

Also, if the wife purchases something that the husband does not agree with then there could be a conflict between them.

A lot of it also has to do with the wife’s spending habits.

Some wives have a knack for stretching their husband’s money whereas other wives are extremely wasteful and extravagant with their money.

A husband might not see a need to give his hard-earned income to his financially reckless wife.

Should a Husband Give His Wife Spending Money Even If She Works? 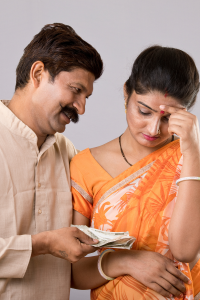 Honestly, there’s no right or wrong answer to this question.

It all depends on the individual couple and their unique situation.

But there are a few things to consider when making the decision.

First, how much does the wife contribute to the household income?

If she works, does her job cover all of her expenses, or does she need extra money for things like groceries, clothing, and personal items?

And secondly, how tight is the husband’s budget?

Can he comfortably afford to give his wife spending money even if she already has a job?

These are just a few factors to consider when deciding whether or not to give your wife an allowance.

Ultimately, it’s up to the husband and wife themselves to decide what’s best for their relationship.

When it comes to money, there can be a lot of grey areas.

Lack of communication and agreement on money issues can bring a marriage to its knees.

Discussion about money should be had between spouses, but not all couples can come to full agreement.

If an allowance for spending is what you and your spouse agree upon, then so be it.

An allowance can strengthen or tear down a relationship depending on how it’s approached. 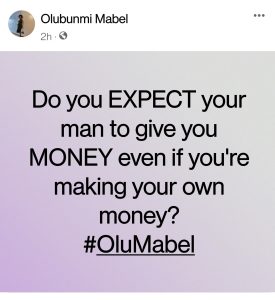 Meanwhile, I asked the above question on Facebook and got over 200 responses with 99% of women saying they expect their men to give them money even if they are making their own money!

How To Be a Better Wife