Do you ever wonder if you are intimidating to men?

Women are often told that they need to be more confident or less aggressive in order to get the attention of guys and not scare guys away.

While there may be signs that tell a guy is intimidated by a woman, it’s not always an easy thing for women to do what they want without being labeled as “too much” or “intimidating.”

16 Signs You Are Intimidating to Guys

1. They’re Not as Chivalrous in Public 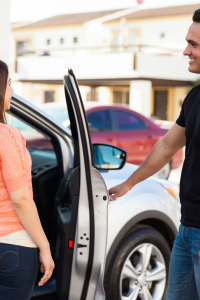 To be chivalrous means to be polite and generous especially to women.

Typically, guys are the ones who will hold open doors for women or pull out chairs at a restaurant.

However, the absence of these signs of chivalry can be signs that you are intimidating to men if they don’t do them as often when around you.

A guy who is intimidated by you will not be chivalrous.

If a man opens doors for you or pulls out chairs, then it’s safe to assume he isn’t intimidated by your strength and independence.

This doesn’t mean every man should hold the door open for a woman.

However, if a man does something like this without being prompted (such as in business settings), it likely comes from their respect of you rather than fear of offending or angering you.

2. You’re More Aggressive Than Them

Typically, women are not aggressive.

If you’re more aggressive than men, they may find you intimidating.

Men will be extremely hesitant to approach any woman who is too forward or assertive with her actions and words because they don’t know how she’ll react.

Guys won’t feel the need to step in and help because they don’t know how you’ll react.

3. They Are Overly Polite

A guy will often be overly polite to a woman they find intimidating.

This is because they are constantly walking on eggshells around them and don’t want to say anything wrong or offend her in case it’s the one thing that triggers an outburst of anger.

They’re afraid of you yelling at them for saying something out-of-line or not politically correct enough – even if he didn’t mean any harm by it.

The signs you intimidate men can manifest themselves this way, so watch out for guys who always bend over backward trying their best never to offend you.

They may just be acting nice because they fear upsetting you more than actually respecting your opinions or thoughts.

This doesn’t mean every man who treats women with respect is intimidated by them, but signs you are intimidating to men may be present if he’s always extremely nice and agreeable.

4. You’re a Woman Who Loves to Be in Control

If you love being the dominant one and holding power over others, then it’s safe to say you are intimidating.

A man will usually stay away from a woman who is the dominant one in every situation because they do not want her to think he is weak or “less of a man.”

If she’s always calling the shots, making decisions for him without asking his input, and being very authoritative – it can be signs that intimidate men.

However, if this isn’t how your relationship normally works with guys (and assuming there aren’t signs of abuse), then it probably doesn’t mean anything about whether or not you intimidate them.

It may just be an isolated incident where the guy was feeling extra intimidated.

5. They Have a Hard Time Making Eye Contact with You

A guy who is intimidated by a woman will often have a hard time making eye contact with her.

It’s because they’re nervous and find it difficult to look at her without feeling intimidated.

If you notice a guy having a hard time looking directly into your eyes, especially if he is not the shy type, then you may be intimidating to guys. 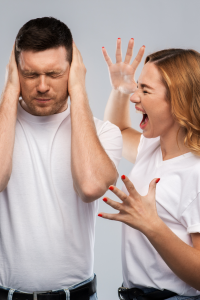 If you’re confrontational with guys, you may intimidate them.

For example, if they say something and you respond aggressively (such as calling them out on their mistake or arguing back), it’s a sign that intimidates men.

They don’t feel like engaging in conversations or debates with someone who is always ready to attack them at any moment.

If you notice they try to avoid talking about certain things with you or avoiding conversations altogether – it’s a sign of intimidation.

You come across as mean and no one wants to deal with someone who is constantly aggressive or confrontational – especially when there are other options available for conversation.

7. They May Feel Insecure Around You

A guy who is intimidated by a woman may feel insecure around her.

He’ll usually start to doubt himself, his actions, and how he looks when in the presence of someone who intimidates him so much.

If guys feel like their manliness can’t measure up next to yours (even though this isn’t your intention), they’ll probably shy away from hanging out with you completely because they don’t want to feel insecure around you.

A guy will typically find excuses not to hang out anymore if he starts feeling bad about himself after spending time with you.

This doesn’t mean every guy who feels insecure next to a woman is intimidated by her – but if this continues over time and with different people, it’s a sure sign she intimidates men.

8. Guys Don’t Approach You Even Though They Are Interested in You 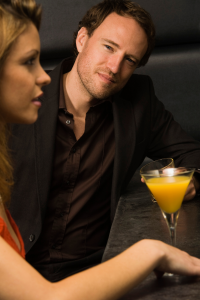 One of the signs you are intimidating to guys is that they don’t approach you.

Even when they are interested in you, guys find it difficult to ask for your number or start a conversation with you because of the way you act and fear that they will be rejected if they approach you.

Maybe you are not intimidating but it seems like that to them.

9. They Give Up Easily

Another sign you are intimidating to guys is that they give up easily.

They may be interested in you but they think that it is not worth the effort to try and ask for your number.

This means that most guys who are into you will eventually give up with no further attempt of asking for a date or even starting a conversation because they find you intimidating.

10. You Brag About Your Achievements Too Much

If you brag about how smart you are, your job, and other accomplishments, then guys might consider you intimidating because they feel like they can’t possibly compete with that.

11. You Try to Be the Center of Attention at All Times

If you try too hard, and always want everyone’s attention on yourself, then guys might think that it is intimidating because they feel like you are putting pressure on them to be entertaining.

It can come off as if they have to impress you or else risk being considered boring by your standards.

If you usually have a serious look on your face or never smile when guys approach you, then they might consider it intimidating.

It can come off as if you’re not interested in them and that they will need to do something special just to get your attention.

They may feel like there is no point in trying with someone who isn’t going to be receptive from the get-go anyway.

If you don’t seem like the type of person who is looking for a relationship, then guys might consider being with you intimidating because they might feel as though they will never be able to give you what you need because of your independence.

They may also feel as though they will be one of many people you are casually dating and won’t be able to compete with the other guys in your life if that is how you’re going about things.

If it seems like you don’t want a relationship at all, then most guys will find themselves intimidated by the idea of pursuing someone who isn’t interested and doesn’t seem vulnerable.

This is one of the issues that ruined the love story of Ana Carolina Prado and Shayan Haghbin in the Reality TV show, Love is Blind Brazil.

On the altar, where Shayan refused to marry Ana, he said she was always saying she was complete and didn’t need a man. What then would he be doing in her life if she was complete? 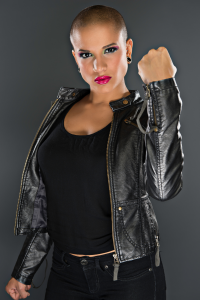 If you seem like the type of girl who is always trying to act tough and unapproachable, then guys might find that intimidating.

They may feel as though they will never be able to please you or get on your good side so why bother?

Or if it seems like you are always looking for a fight, then most people won’t want to try their luck with someone who isn’t going to back down easily.

This can also come off as mean-spirited because some men think women shouldn’t be acting all macho even if they’re just being playful around friends.

It makes them uncomfortable seeing girls “acting too much” like one of the boys when there’s no reason for her behavior in particular other than she’s trying to be tough.

Being sarcastic can come off as intimidating because some guys don’t have a sense of humor about themselves and think they are always being judged for not having one.

If you seem like the type who is constantly making jokes even when there’s no reason to, then it might intimidate some people into thinking that everything they say will be taken in jest instead of how it was intended.

It makes them feel put on the spot if every conversation topic becomes an opportunity for you to cut them down with wit or sarcasm.

If this is something you do all the time though, especially without knowing someone first, then chances are you come off as intimidating won’t be hard to spot because he’ll probably never want anything serious with anyone so caustic and negative.

It’s important to be self-aware of how you come off when joking or being sarcastic because most people don’t realize it can intimidate others until they start feeling that way themselves.

16. Your Family and Friends Tell You to Tone it Down

Your family and friends are always telling you to tone it down, especially around guys.

If they’re trying to subtly warn you that men find your behavior intimidating then maybe you should listen.

Just remember, there’s nothing wrong with being confident but that doesn’t mean you have to intimidate people.

Everyone gets along with different people for various reasons but if every guy seems uninterested in you, then maybe there is something wrong with how your present yourself in public.

Remember: just because someone doesn’t show signs of interest in dating or pursuing any kind of romantic relationship does NOT mean he’s intimidated by you.

There could be many other reasons behind this behavior such as shyness or lack of experience. It isn’t always about intimidation; you never know what’s going on in someone else’s head.

Finally, while you should check yourself, don’t belittle your achievements, abilities, or independence to make others comfortable.

Don’t apologize for being an independent woman.

You don’t need someone who is intimidated by your success and intelligence.

Everyone intimidates people in some way, but if you’re constantly making guys feel uncomfortable or nervous around you, then there is something wrong with your behavior and it needs to change. 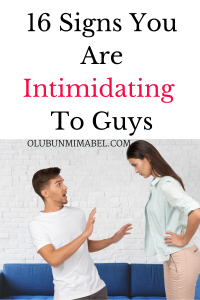