Is it possible to make someone like you over text?

I know it’s a really weird idea but it’s very possible and in the course of this text, we’ll be looking at the way it works—how to make someone like you over text.

You can make someone like you over text if you follow through with the tips listed below.

What’s the most important thing to do when flirting over text?

It doesn’t matter if it’s someone you’ve known for a while or someone you just met, the most important thing to do while flirting with someone you’re attracted to is to enjoy yourself.

Your texts should always be lighthearted and playful.

The key to getting someone to see you in a different, sweet light over text is by making sure they light up and smile whenever their phones beep and the notification says that it’s a text from you.

How Do you Make Someone You Like Smile Over Text?

Although you might not get to see their faces when they read your text, here are some sure ways to make the person you’re interested in smile over text: 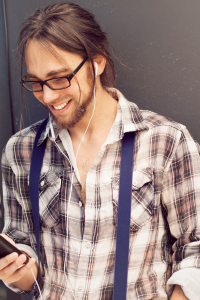 There’s nothing wrong with poking fun at the recipient of your text in a good and playful way.

Teasing someone not only makes them laugh, but it also passes the message across that you are not an uptight person.

It takes a whole lot of confidence to introduce some amount of teasing into your texts.

There are a lot of ways to infuse a dose of confidence into a text and still make it witty and look authentic.

You should try it out one of these days. Trust me, you’ll be glad you did.

2. Make Fun of Yourself 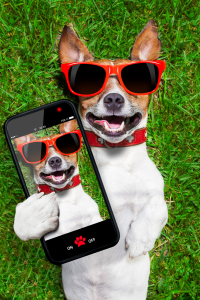 Another sure way to get someone to smiles over text is by making fun of yourself in a humorous way.

By doing this, you show them that life shouldn’t be too serious and that you’re not a very uptight person.

This will make them let their guard down around you and become more comfortable around you.

As things progress, they’ll begin to get attracted or even more attracted to you.

3. Think Ahead of Them

If you want to have fun alongside the recipient of your texts, you should try to guess the type of reply they’ll have for your text.

With that answer in mind, it’ll spur you to diversify and make your text sound more interesting.

Of course, this will get their attention faster and pique their interest in you.

They’ll be curious to know what you’re all about.

The first thing that should come to your mind whenever roleplay is talked about is having friendly banter over text with the person at the other end of the line.

Just like it works successfully when you want to meet and attract someone physically, this technique works just as much for people who are trying to connect over text.

You can simply initiate a scene where both of you are already a couple, pretend to be very much into each other, and have banters based on the roles you choose to take up.

When you have conversations that stem from roleplays that are made up, it helps both of you find a common playful ground that at least allows you to have some memories together.

Also, role-playing gets both parties smiling and feeling more comfortable and connected simply by sharing in the imaginations of each other.

5. Let Them Come After You

In our quest for romance, it is natural to seek out and go after the people that offer us some kind of challenge.

You need to allow your romantic interest to come after you, chase you because making things very easy for them can be boring and a turnoff.

Make them chase you by doing these things while you text them:

You can disqualify yourself playfully from the dating pool of your romantic interest to avoid being seen as a needy person.

Dare I say that this move makes you look more confident and confidence is attractive.

What does it mean to disqualify yourself from the dating pool of your romantic interest?

It simply means telling a joke about how the both of you cannot be a great match.

For instance, you could text them something similar to, “Woah, Woah! You like [thing s/he likes]? I didn’t know you were that type! I might have to get my mom’s permission just to kick it with you…”

You just pushed them away from yourself playfully by doing this and it creates a chance for them to come after you.

2. Do Not Text More Than Necessary

Texting more than necessary is a big red flag that should be avoided at all costs because it kills attraction very fast.

Generally, it is believed and appears rightfully so, that the one who is putting more effort into communication in any romantic arrangement is the one who is chasing the other party.

Therefore, if you do not want to be the pursuer but rather the pursued, you have to avoid sending texts unnecessarily.

You can achieve this by trying as much as possible to maintain the ratio at which the both of you exchange texts at 1:1.

To make it easier for you, simply send your romantic interest texts just as frequently as they send you texts.

You can get someone to start liking you over text when you massage their ego.

This is a very valid way of sparking attraction and likeness over text.

Let them be aware of the fact that they have a positive impact on you and that they will always be in your heart, never to be forgotten.

Just create the impression that even the most little things remind you of them.

Doing this will make them feel so good about themselves and special too.

And what did they say about people who make others feel good and special?

It is very easy to begin to like them and get attracted to them.

4. Do Not Send Them One Word Texts

These will be read as rude and it’s very difficult to keep a conversation going with only single syllable words.

If you want the person to like you, then go out of your way to say something interesting.

5. Ask Them Questions About Themselves

Long messages could be a turn off.

So, make sure keep things concise and fun.

If you need help, write out your message first and cut out unneccessary words before sending it through texting.

This is also known as drafting, which basically means writing up all of your points before putting them together into a complete thought.

As much as you want to impress the person you like and make them to like you over text, you have to be yourself.

You can’t pretend that you are someone or something that you’re not, because this will just backfire.

You don’t want them thinking of you as a fake person so try being yourself first and foremost!

8. Designate Times When Texting Should End

Since texting is used mostly on mobile devices, it’s easy to get carried away and forget how much time you’re spending on the conversation.

Set a timer for yourself so that you don’t lose track of how long you’ve been talking. 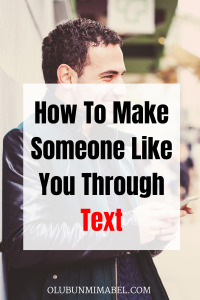