If you are looking for signs he loves his ex more than you; your suspicions may be true.

It’s normal for your boyfriend to have an ex-girlfriend.

But when it comes to you and him, a relationship is about two people, not three.

If he seems distracted or distant, it could be because he’s thinking about the other woman—his ex!

Here are the thirteen biggest signs he loves his ex more than you:

13 Signs He Loves His Ex More Than You

1. He still has pictures of them together in his home

There is no denying that he’s still in love with his ex, even more than you if he has pictures of them together in his home.

It shows that he remains connected to her emotionally and physically.

That means he’s still very attached to having her around and that she’s probably a presence in his life.

If he’s no longer in love with her, why does he have items that remind him and others of her?

2. He’s reluctant to talk about the future with you

Being in love means being able to see a long-term future with someone.

It also means talking about that future as you imagine it.

He might not see you as his wife if he’s reluctant to talk about the future with you or becomes evasive when you mention the possibility of being together forever.

This could be because he’s still holding on to the happily ever after dream with his ex.

So it’s difficult for him to replace that image with you because he still longs for her more than he longs for you.

This is why he can’t commit to you.

3. He follows her on social media and reads her updates

If he’s following his ex on social media and reading her updates, it could signify that he loves his ex more than you.

Most people usually unfollow or block their exes after a breakup because they don’t want to have anything to do with them anymore.

They want it to be over indeed; even if they still care about them, they know it’s just a matter of time; they’d get over them.

If your boyfriend loves his ex more than you, he may still want to know what she’s up to, or he may not have gotten around to blocking her on the platform.

However you look at it, this sign of him not cutting ties with his ex clearly indicates his feelings for her.

If he follows her life on social media after their relationship ended even more than he follows you, he’s in love with her more than you.

If your man is sad that his ex has moved on with someone else, it’s not because he’s overly sentimental.

He may still have feelings for her or be upset because he misses her or knows he could’ve done more to stay together.

Whatever it is, he’s not just happy she’s moved on because it dashed the hope of ever getting back together with her.

I mean, if you’re no longer in love with your ex, you’ll not care about their relationship status.

Instead, you’ll focus on your new relationship/partner.

So, if he’s sad that his ex has moved on instead of focusing on you, he loves her more than you.

5. He still speaks with her 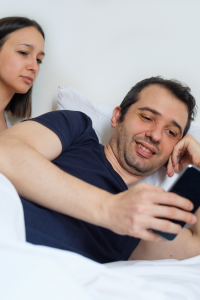 Trust your gut if he says they’re “just friends,” and you suspect that there’s more going on than just friendship.

Any guy who is still in touch with an ex, regardless of the reason, could end up being a threat to the relationship you share with him.

When a man is serious about being with a woman, he usually cuts off all communication with his exes to avoid setting himself up for temptation or making his new girlfriend feel uncomfortable.

So if he wants to continue having contact or spending time with his ex even while dating you, it may be because he still has feelings for her and doesn’t want to let go of the intimacy they shared.

6. You aren’t sure if he ever really loved you in the first place

You think there’s a possibility that he never loved you in the first place, and you may have been a rebound, someone he could distract himself with to avoid having to feel his pain.

He could have used your love for him as a tool for making his ex jealous or winning her back.

Whichever scenario is true for your guy, it’s safe to say his ex is still on his mind.

And she’s going to be there until one of two things happens: they get back together, or there are no feelings between them.

7. He can’t stop talking about her and his relationship with her 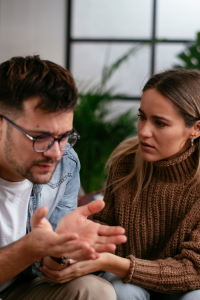 Sometimes, it’s easier to talk about the past than the future, especially when you’re not sure if your partner is in it for the long haul.

But if your boyfriend is still hung up on their ex, they’ll likely default to discussing their old flame because that relationship was more comfortable than your current dynamic.

If you hear things like “When we were together, she used to do this…” or “My ex would never let me get away with that!” that’s the sound of someone who’s still not over their past.

When someone can’t stop talking about their ex, they are not over them yet, and they may love their old relationship more than their new one.

8. Her name comes up in your conversations

If he’s bringing up his ex-girlfriend’s name in your conversations without any prompting, that’s a sign that he still has feelings for her.

It means she has a hold on him that you don’t.

He might even call her name when he’s supposed to call you. 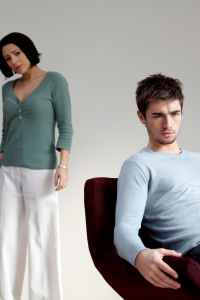 This is one of the most obvious signs that he still has feelings for her.

Of course, moving on from an ex takes time, but if his relationship ended a long time ago and he hasn’t moved on, he might still love her more than he loves you.

So, if you suspect that your boyfriend holds onto a grudge against his ex or talks negatively about her, then this is a sign that he hasn’t moved on.

Comparing someone to an ex-partner is never a good thing.

It puts pressure on the person who isn’t their ex-partner and shows an inability of your current man to see you for all of your great qualities because he’s still holding onto what was in the past with his previous partner.

If your guy is constantly comparing you to his ex, that’s a sign he probably loves her more than you.

Now, maybe she was amazing, and he couldn’t help it.

However, if he’s constantly talking about how great she was at cooking or how fun she was to be with or whatever the magical thing they did together, chances are he wishes you were more like her.

No one wants to be compared to someone else when it comes down to it.

If your man is doing it often, they love their ex more than they love you!

11. He’s still bitter about the breakup 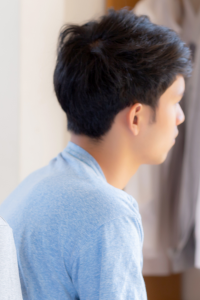 You can tell because he’s always talking about it and how unfair it was to him.

Whether it was because he was cheated on or dumped unfairly, if he’s bringing up negative feelings towards his ex, he’s still hanging onto some emotion of a past relationship.

You’ll know from his eyes if your guy’s still hung up on his ex.

Do they have a dreamy, faraway look? Do they light up when he talks about her?

Does he get sparkly-eyed when you mention her name?

If he secretly wishes she was the one he was with right now, you’ll be able to see it in the way his eyes glaze over when you talk to him.

If he wishes she was next to him at a restaurant instead of you, you’ll notice that his eyes appear tired and bored.

When someone asks about your relationship, he says, “She’s great,” but when they ask about his ex, he just smiles and shakes his head like he can’t find the words.

He’s still in love with her.

Don’t take it personally if your man exhibits these signs, even though it’s hard not to.

Sometimes men need time before they’re ready to let go of the past; however, there will come a point when your patience runs out, and you realize you deserve more than your man is giving you.

Talk to your man and share your concerns with him.

You can issue him an ultimatum and tell him to get his acts together if he wants to be in a relationship with you. 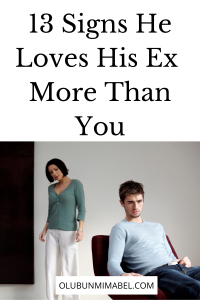 15 Amazing Signs He Doesn’t Want To Lose You

DO REBOUNDS MAKE YOU MISS YOUR EX MORE? YES AND NO…