Why does he keep coming back but won’t commit?

Did you find yourself in a situation best described by the above question?

I know you’re looking for answers, and I want to let you know that you’re in the right place.

Stick around and read to the end.

Just as you are about to move on with your life after he left, he comes back, and as you’re getting used to him being in your life, he leaves again.

And this is not the first time it’s happened – it’s a cycle that keeps repeating itself, and he has made it a habit.

But then, you can’t tell what he’s up to with his sneaky habit.

In this article, we’ll be looking at some of the answers to the question – why does he keep coming back but won’t commit?

First, I want you to know that you’re not responsible for how he’s acting.

So, don’t ever beat yourself up for whatever actions an adult takes consciously.

He is the one who has a problem and needs help.

Let’s look at some of the reasons why he keeps coming back but won’t commit and the possible solutions to the problem.

Why Does He Keep Coming Back But Won’t Commit?

1. He’s not ready to be in a relationship 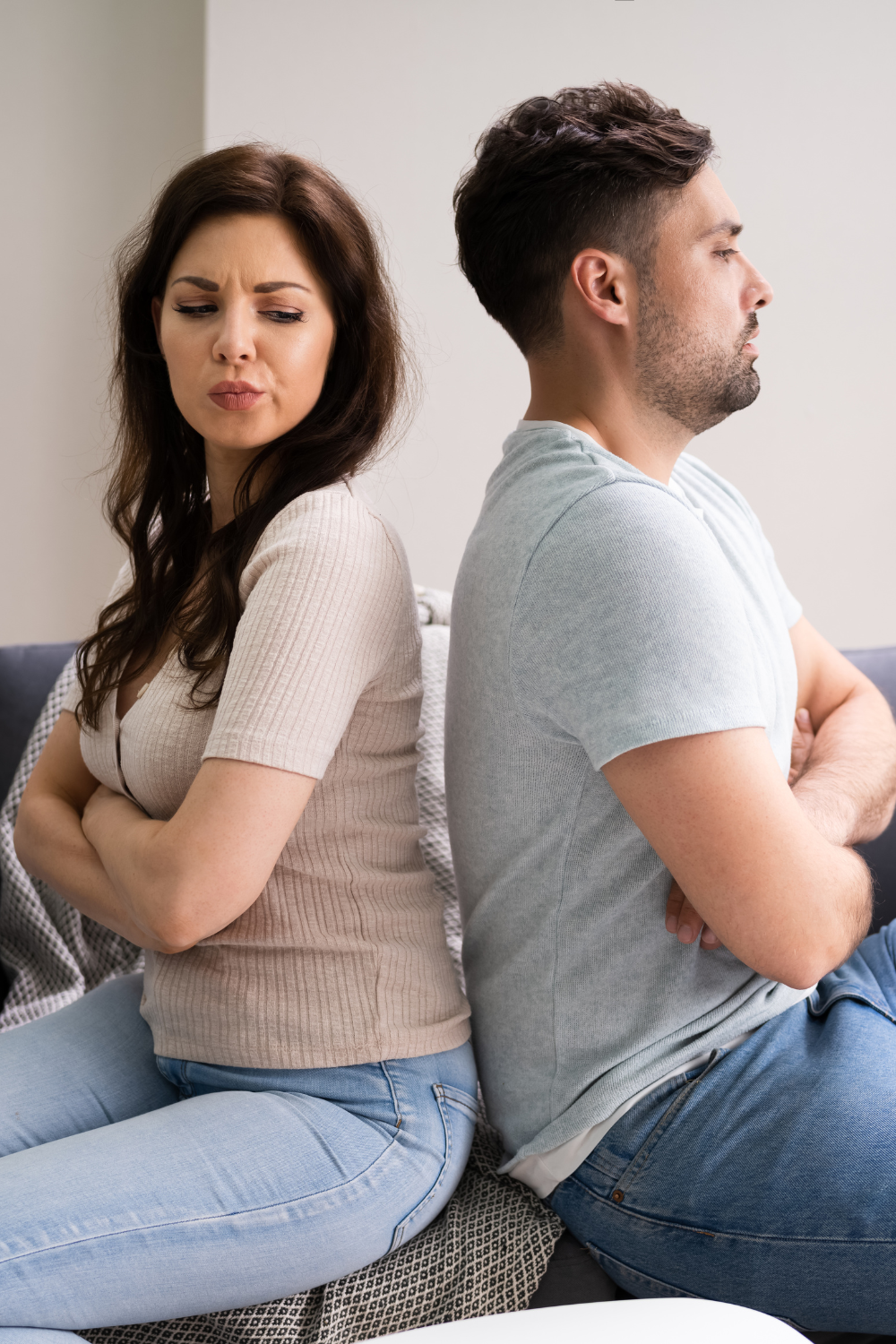 Whenever someone is not ready to be in a relationship, they enjoy the moment with you and are out of the door when they notice that you’re beginning to develop feelings for them.

He might be head over heels in love with you, but if he’s not ready to be in a relationship at the moment, he’ll want to keep his distance from you because of fear of hurting your feelings.

You’ll agree that this is an ironic way of thinking since he’s already hurting you by deciding to stay away, knowing fully that you’re into him.

He may not be ready to be in a relationship for many reasons.

They include financial instability, the need to put his life together, and just getting out of a relationship, among other possible reasons.

He’ll remain single until he deals with everything that keeps him from getting committed to you.

And if I’m to say, he’s being realistic about his love and relationship life.

He should deal with his issues once before getting into a relationship than getting into one and changing his mind halfway.

2. He currently has other priorities in his life 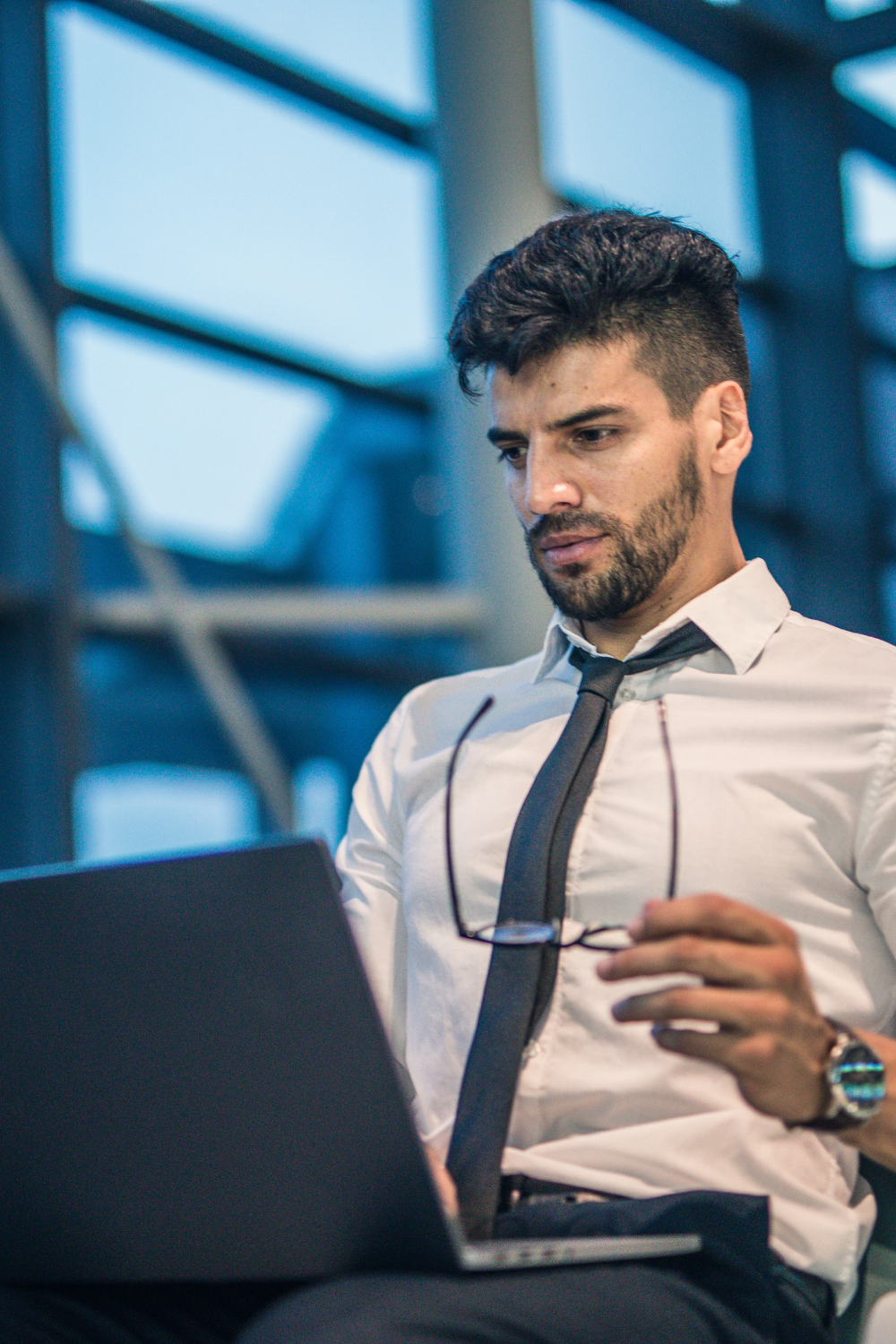 Some men want to be great in life; they don’t want to settle for good.

Perhaps, the guy in question is ambitious.

If that is the case, he’ll always follow his brain over his heart, come what may.

You need to understand how he works – he gets close to you when he’s following his heart and then uses his brain whenever he is about to fall deeply in love with you.

That’s the only way he can stay focused on his dreams, so he leaves you.

If he’s this type of guy, ask yourself if you can wait for him.

He may avoid getting into a relationship with you now because he knows he can’t juggle you and his career simultaneously.

His career and your relationship with him may suffer if he tries it.

He may be ready to commit to you in say, five or ten years.

But can you wait?

3. He doesn’t want to get hurt

Why does he keep coming back but won’t commit?

He may have had an ugly relationship in the past that scarred him.

Or he loves you so much that it has given you the power to hurt him.

He knows this, and he’s scared of getting hurt.

Who doesn’t shudder at the thought of getting hurt?

Notwithstanding, it is a lame excuse for his attitude of always entering and exiting your life at will.

A strong name that describes this attitude is cowardice.

But it’s not unsalvageable, though.

Try to reassure him and rid him of his fears.

Both of you can finally be together.

4. He is fundamentally indecisive 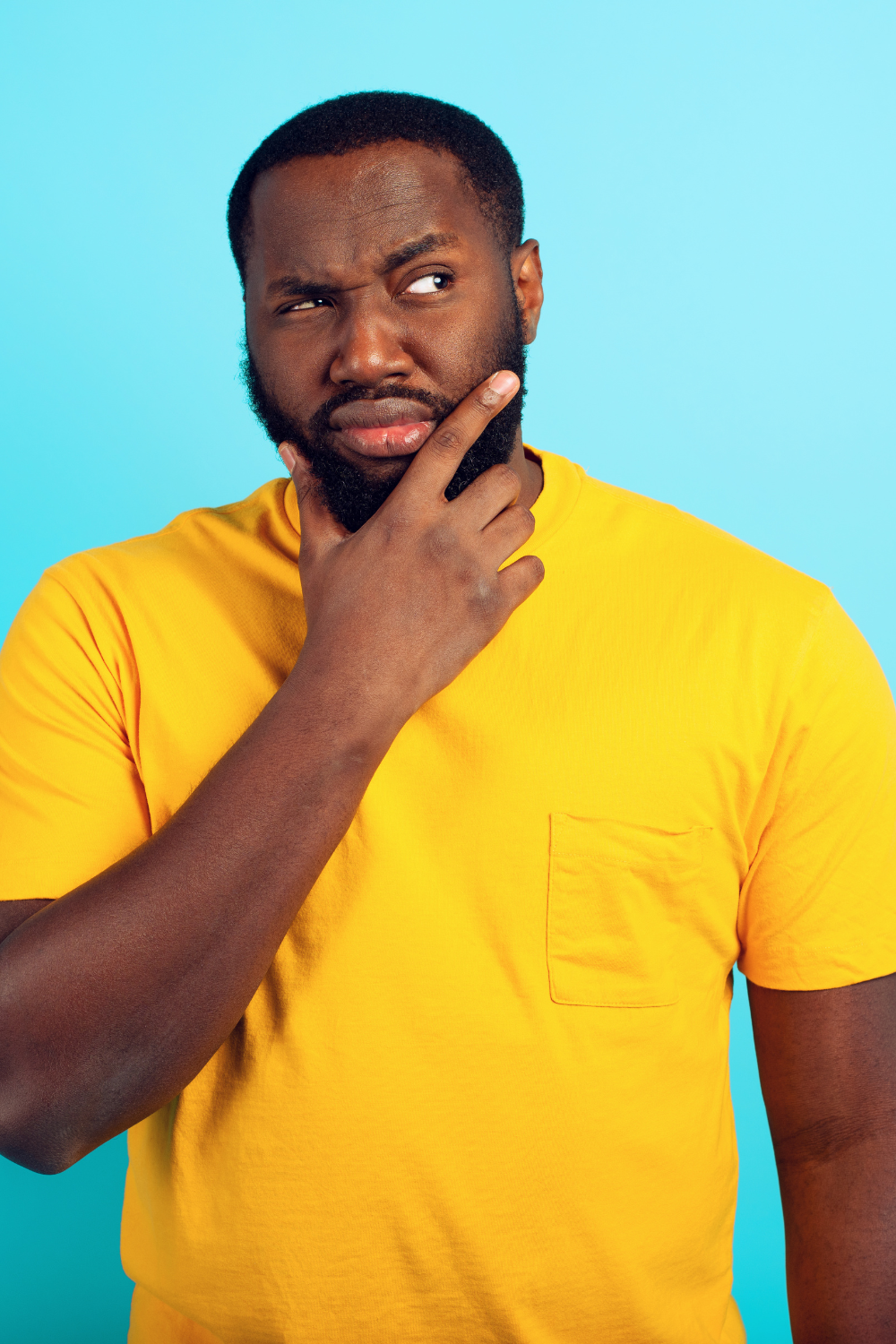 Some men take forever to make lifetime decisions, even if he’s ready to be in a relationship and loves you.

Simply put, he’s indecisive, which may have an underlying reason, like having strict parents while growing up.

It could also be that he has always been this way.

Check out how slowly or quickly he makes decisions about the simple things of life, such as the brand of shampoo to buy.

Then look at how many girls he has dated; if they’re few, then he takes his time when choosing a partner.

Although his indecisiveness may look bad to you, especially if you’re beginning to doubt his intentions towards you, it can signify his loyalty once he commits to you.

After all, he took all the time in the world to choose.

Let’s also assume that it’ll take him all the time in the world to end the relationship when you eventually become an item.

5. He just loves to hang out with you 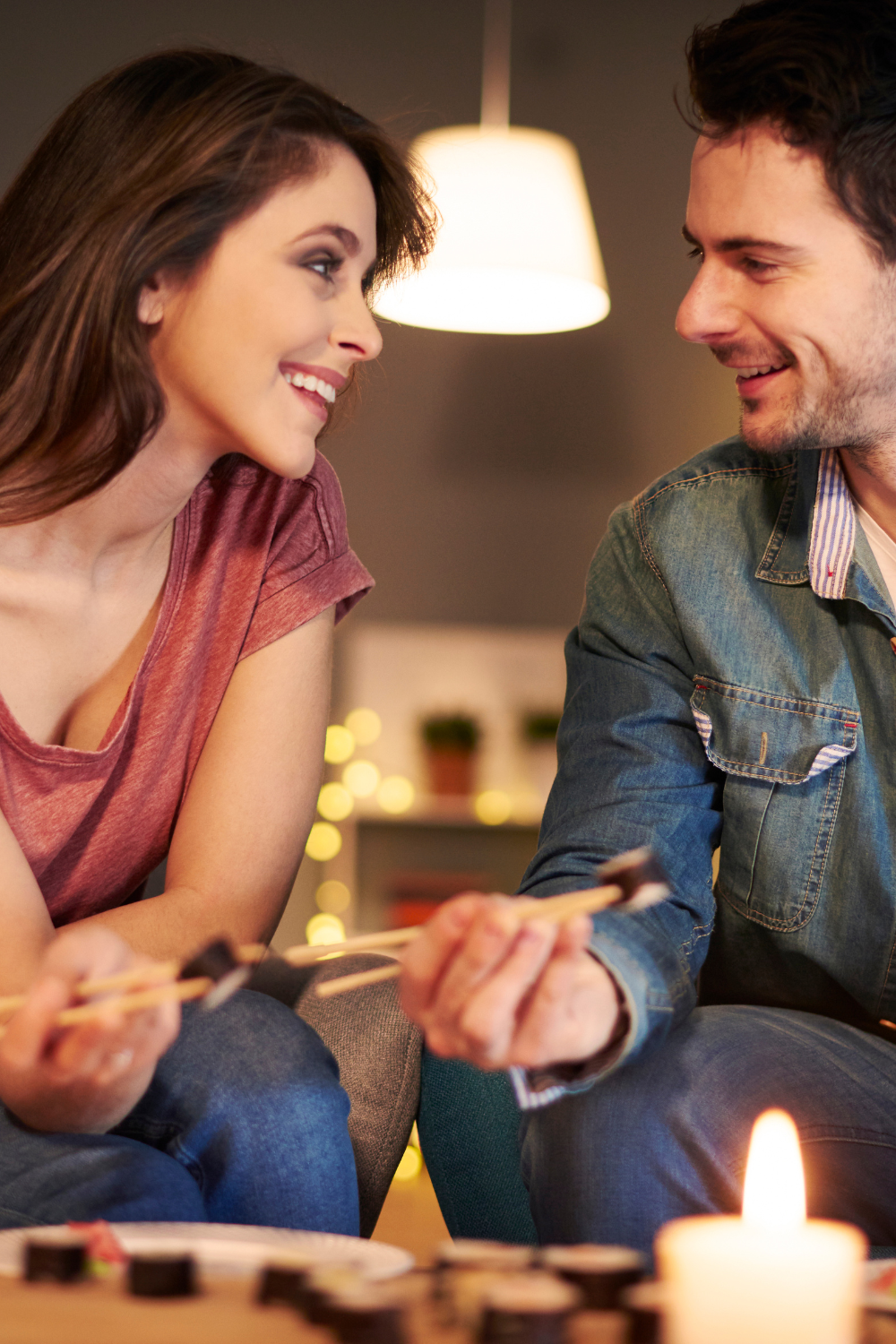 If you’re still asking, “why does he keep coming back but won’t commit?” it could be that the guy just likes to hang out with you a lot.

And it doesn’t matter if there’s a romantic connection between you or not.

He might just see you as a friend; it doesn’t matter if both of you have been intimate.

I think that’s where the term “friends with benefits” comes in.

He may not see you as more than a friend, and as a result, he may not know the effect he has on you.

To him, he never even left your life because there’s bound to be a lag in communication between friends at some point.

6. You keep taking him back

And, of course, this is the most important reason he keeps coming back without committing is because you keep taking him back.

Why Does He Keep Coming Back But Won’t Commit: What To Do

1. Make him realize that he’s better off with you than being single

The first step towards making a man stick with you is letting him see that he’s better off being in a relationship with you than being single.

It gets complicated for most men whenever the issue of commitment comes up.

They only want to commit when they find out that their lives are much better with you in them.

Let him feel that he has found the perfect woman for him, someone who is worth it and that he’s afraid of losing you.

2. Let him know how you feel

At this point, I believe that both of you are way past the dating stage.

You might be longtime friends, friends with benefits, or even exes if he keeps entering and exiting your life several times.

As a result, you should feel free to lay yourself bare to him – let him know exactly how you feel.

Find the courage to be vulnerable before him just this one time if this idea makes you uncomfortable.

Although it’s not an easy step to take, it is the right way to speak up for yourself and stop dying in silence.

It’s frustrating to have a man you have feelings for play hide and seek with your emotions.

It may appear like he’s trying to get you to be stuck with him, so it’s okay if the whole situation gets you angry.

We’ve looked at some reasons why he acts the way he does.

But remember that you don’t deserve to be treated this way, and you should never settle for less, no matter his reasons.

If you’re wondering, “why does he keep coming back but won’t commit?” I hope you apply the solutions in this piece to set yourself free from his grasp or begin a new journey together as an item. 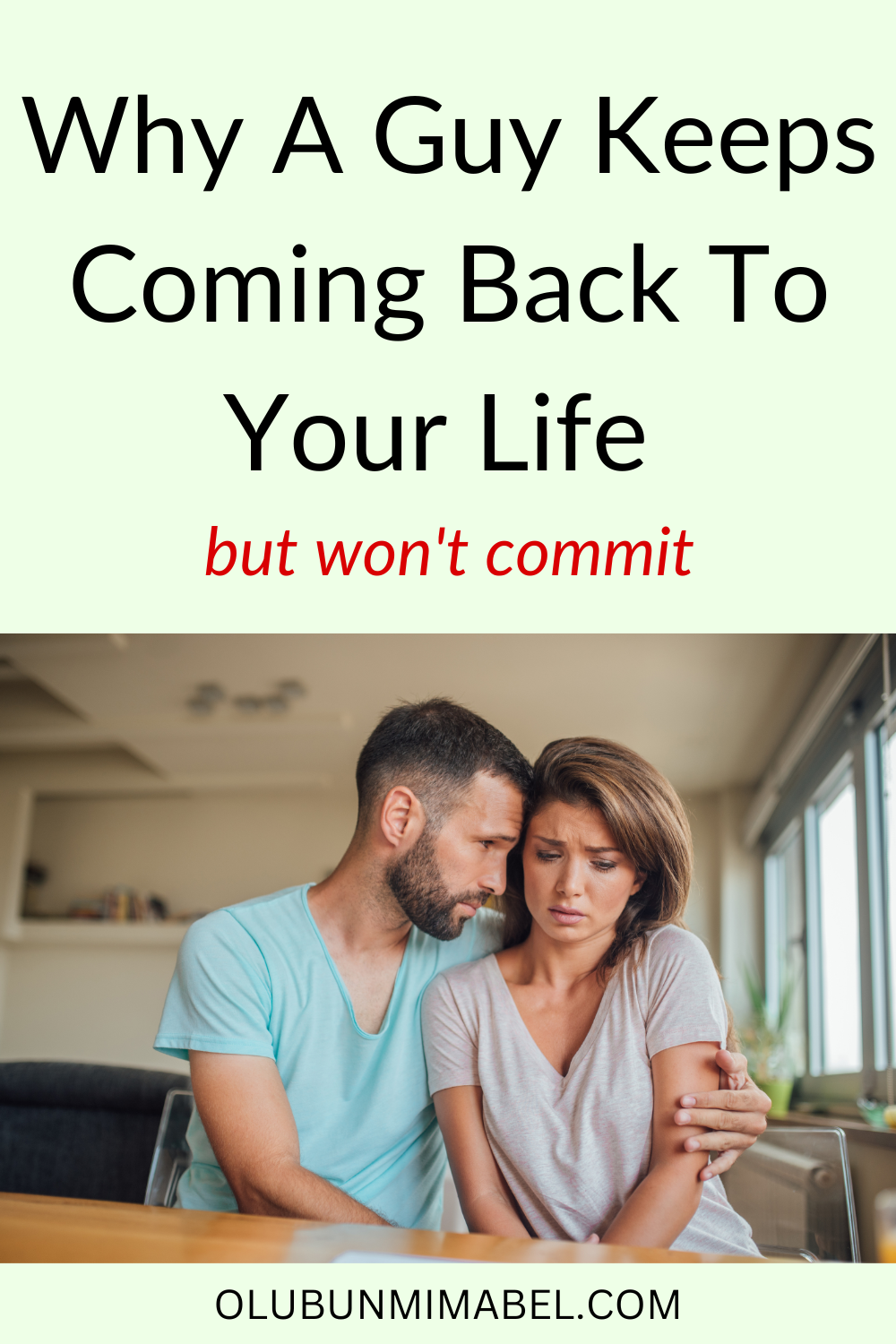