For some, being a hopeless romantic is a title of shame.

For others, it’s a badge of honor.

No matter which side of the fence you fall on, there’s no denying that hopeless romantics have a certain je ne sais quoi about them.

So what makes someone a hopeless romantic?

And are there any signs that you might be one too?

Keep reading to find out!

The dictionary definition of a hopeless romantic is “a person who spends their time looking for, and trying to create or sustain, the perfect romantic relationship.”

Other words that are often used interchangeably with ‘hopeless’ in this case include: naive, foolish, foolishly idealistic, romantic, sentimentalist, sentimental, idealist, dreamer, unrealistic, and noble.

The word romantic has a few different meanings.

One being that of a person who views the world with rose-colored glasses, and another being a person who is overly sentimental.

A hopeless romantic is someone who falls into both of these categories.

They see the world as more magical than it actually is, thus creating an endless stream of opportunities for “true love” to happen.

Another way that people use the term hopeless romantic is to describe a man or woman who believes in and exhibits very traditional, old-fashioned values ​​in their relationships.

The fact of the matter is that it takes all three definitions to accurately sum up what it means to be a “hopeless romantic.”

What It Means to Be Romantic

Although being romantic is not necessarily the same thing as being hopeless, they are certainly related.

Being romantic means that you have a creative imagination, are creative in general, and possess an appreciation for beauty in all forms.

You also likely carry around an optimistic perspective on life, which helps you see the beauty in even the worst of situations.

Romantics are artistic and interested in a myriad of different pursuits, including but not limited to: fashion, cooking, dancing, singing, writing, music, theater, poetry, etc.

It is also important to note that romantics make very loyal friends.

In fact, anyone who’s had a romantic in their corner would be quick to tell you that they are the best friend any person could ever hope for.

Romantics typically prefer to live life at their own pace and tend not to conform to society’s norms.

They like having creative control over everything that happens in their lives, including, but not limited to: what they do for a living, where they live, who they are friends with, etc.

Romantics are also perfectionists, which can sometimes make them hypercritical of themselves and everyone around them.

If you see yourself as a hopeless romantic, it’s important to remember that this is something that can be both positive and negative.

1. You are always looking for love 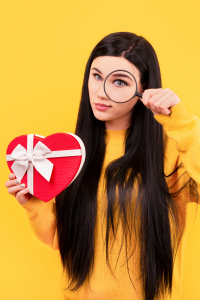 Hopeless romantics tend to see the best in people and believe everyone has good intentions, so they always want to let people into their lives. 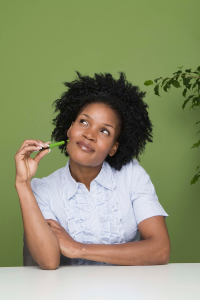 You are always in love with the idea of being in love.

In fact, most of their relationships are based on idealization, which makes it difficult for them to see other people as they really are.

If a relationship doesn’t live up to the notion that they’ve created in their heads, they’ll run away fast.

This can lead to a cycle of falling in and out of relationships, without ever having a chance to experience one that lasts.

3. Romance is almost always on their mind

It’s not unusual for romantics to fall in love often or at least have crushes frequently, but this can also make them blind to the reality of their situation.

For instance, a hopeless romantic may be so caught up in the romance of a first date that she fails to see warning signs that the person is not right for them.

This can lead them to stay in relationships longer than they should or take on responsibilities they aren’t ready for.

4. They believe love cures all 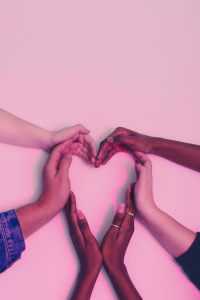 Romantics usually have a strong sense of belief that love is the answer to everything.

They see themselves as open and giving people, and they believe that by letting their guard down and opening up about their feelings, they can make things work.

Romantics tend to take on more than they should in relationships, which leaves them feeling dissatisfied with the whole thing.

5. They’re not great at dealing with conflict 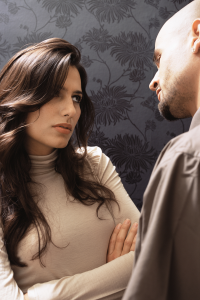 Romantics don’t like to fight, so they will put up with just about anything in order to avoid it.

Romantics don’t want to hurt other people, so they often avoid doing things that might make others angry or upset with them.

This is why they hate having difficult conversations and may do whatever they can to avoid them.

However, this can lead to resentment that eventually boils up and festers until it explodes.

Romantics tend to bottle things up inside, which can have serious mental health effects on them if they don’t learn to deal with conflict. 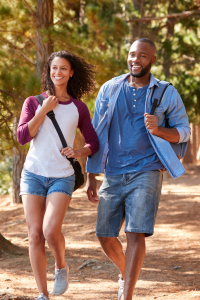 Romantics are searching for their one true love, and that means they are always on the lookout for interesting people who can give them new experiences.

Because of this, romantics tend to move around a lot, even if it’s just from one side of town to another.

The idea of settling down and putting down roots doesn’t appeal to them as much as having a nomadic lifestyle does, which is why they can often be found dating many different people at once. 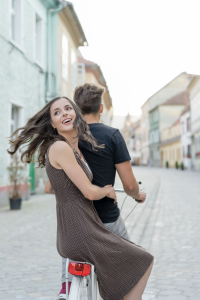 Romantics are very open to the idea of trying new things, which can mean having s*x with people they don’t know or spending time in places that are unsafe.

They’re not as worried about their safety as other types of people might be, and instead trust their gut instincts to tell them what is right.

In fact, romantics tend to be more willing to try risky behaviors, which can potentially lead to them putting themselves in harm’s way.

Romantics are very interested in what other people have to say and enjoy hearing about their lives and perspectives.

For this reason, it’s easy for them to strike up a conversation with anyone, and they’re good at making people feel comfortable.

However, because romantics are so interested in other people, they tend to ignore themselves and their own needs.

They may have a hard time saying “no” when someone asks a favor from them, which can lead them to take on more than they can handle.

You don’t see the bad sides of people, instead, you see good in everyone.

You can feel their pain and sufferings, without even knowing it all that well.

You hope for the best for people and think about them as if they are your own family members.

11. You expect your partner to be as romantic as you are

Being romantic and caring and loving may make you a great partner, but your partners may not be like this.

You hope that they will care for you as much as you do, unconditionally unconditioned.

However, there is no guarantee that they will reciprocate the feelings towards you.

12. You are attracted to people and things that may not be good for you

Everything is just about the way it looks to your eyes.

You tend to ignore all warning signs and even red flags.

You say that people are amazing if they seem attractive or their personality is vibrant enough for you.

13. Hopeless romantics have a huge crush on fictional characters

Romantics tend to live inside their own minds, which means they spend a lot of time daydreaming about fictional characters and it’s hard to find someone who lives up to them.

Their imaginations run wild when it comes to romantic love, and they love thinking about meeting “the one” in their minds.

14. You love going on dates, even if they’re just coffee or ice cream

Hopeless romantics would rather spend a lot of time on a date, even if it’s just grabbing a cup of coffee or an ice cream cone.

They love thinking about what they’re going to wear and how their hair looks, which sometimes seems like too much effort for some people.

15. You enjoy writing love letters (or emails) to your partner 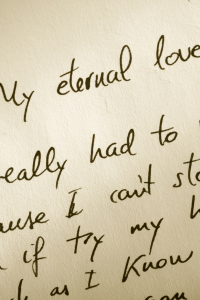 Romantics write love letters and emails their partners to express their feelings, even though it may seem like a lot of work.

They’re not bothered by writing long passages to explain their feelings and enjoy knowing that the person they care about will read every word.

16. You aren’t afraid to show your emotions in public

Romantics aren’t afraid of showing their emotions or being emotionally vulnerable around other people, which can make them very open and honest individuals.

This also means that they’re more likely to be comfortable crying in public, as it’s a natural reaction to certain events.

17. When you see a couple holding hands, you can’t help but smile

You see love everywhere you go, and not just in real life.

Whenever you see a couple holding hands or interacting with each other, you are happy.

You may even feel butterflies in your stomach for fictional characters, rather than the person you are with in real life.

18. When you like someone, all you can think about is them and what they might be doing at any given moment of the day or night

Romantics have a hard time staying away from people they’re interested in, and can’t help but keep checking on them.

They wonder what they would be doing if their paths crossed, or where they might be going for dinner.

Romantics feel the need to check up on them and see everything about their lives, no matter how small it may be.

19. When someone says ‘I love you’ or even ‘I miss you’, your heart explodes with happiness and excitement and joy

When someone expresses their feelings for romantics, they can’t help but feel very excited and happy.

Their hearts beat fast and their mind goes on overdrive with the thought of having a partner who loves them so much. 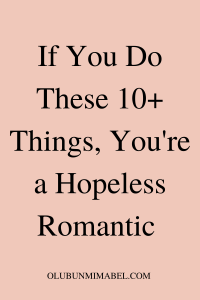 20. You don’t care about what people think of you when it comes to love

Romantics don’t care about what other people think of them and are more interested in expressing their feelings.

They don’t listen to the naysayers who might say something negative about how they choose to live their lives and tend to stay away from so-called ‘uncool’ things.

Romantics follow their hearts, no matter what anyone thinks

21. You still believe that romance is not dead … even though it may seem like it is sometimes

Romantics believe that there is still hope left when it comes to love and romance, even if most people give up on these ideas.

They hold onto the fact that they will find someone who deserves their love, even if it takes some time and a lot of patience.

Romantics don’t give up on love no matter the number of times they’ve been heartbroken.

If you can relate to most of these signs, you are a hopeless romantic!

While it’s okay to believe in love, you should also make sure that you have realistic expectations of people and relationships.

So that you don’t keep getting hurt or let people take advantage of your good nature. 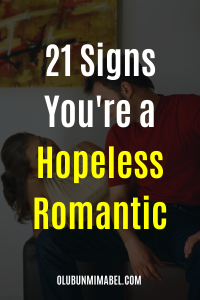