Dating a divorced man is a huge step.

Divorce is not the end of the world.

It’s one of those things that can be very difficult, and it doesn’t have to define you or your future relationships.

However, it does change your perspective on life and marriage in general.

When you date someone who has been married before, you must be aware of some red flags that could indicate he’s not ready for a relationship with you.

These aren’t meant to scare you but rather give you an idea of what to look for if you’re considering dating a divorced man.

Here are some of the red flags never to miss when dating a divorced man:

1. He is still on a dating site

This is one of the clearest red flags that he isn’t taking your relationship as seriously as you want him to.

It might not be as big of a deal if it’s been months since he last logged on.

However, if he is active on the site, this is a sign that he isn’t over his divorce or isn’t ready for a new relationship.

If you decide to move forward with him, make sure that you have a frank discussion about the status of your relationship.

If you’ve been dating for six months and haven’t had the talk about exclusivity yet, don’t assume that things are going in that direction no matter how well things seem to be going with him.

2. He hasn’t introduced you to his friends yet

For a lot of men, their friends are everything.

They’re the people who know them best and have seen them through the good times and bad.

If he won’t introduce you to his friends, it’s possible that he doesn’t want them to know about you yet, and it could be because he’s playing the field. 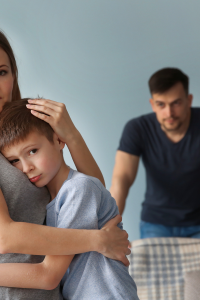 If you want children, you need to think about it before starting a relationship with a divorced man.

If you are with him and he doesn’t want to have children, it’s a huge red flag.

4. He doesn’t have anything in common with you

If a divorced man doesn’t have anything in common with you or seems disinterested in learning more about you, it could mean that he’s just not interested in being with anyone yet.

Sometimes people get into relationships simply because they’re lonely or need someone to talk to, even if they aren’t interested in the other person romantically or emotionally.

If this is the case with your boyfriend, he might just be using you as a rebound.

5. He makes everything about his failed marriage his ex’s fault 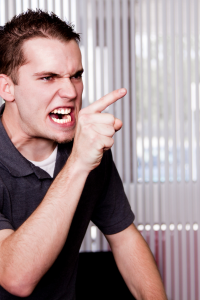 If your divorced boyfriend blames his ex for everything, take note.

It takes two to tango.

And yes, many people are divorced because their partners were selfish jerks (or worse).

But if he can’t get past blaming his ex and he makes all the problems in his marriage her fault—even though both of them played a part, it shows he’s a man who doesn’t take responsibility for his actions.

He’ll do the same with you.

6. He struggles with commitment

If he had only been divorced for a few months, the wounds might still be fresh.

Perhaps he is still dealing with the aftermath and negative emotions surrounding his divorce.

If this is true, he might not be ready to commit to a new relationship.

He may just want companionship, or he can’t imagine being alone.

He may also feel guilty about leaving his family, so dating could be a way for him to let go of his wife and his past life slowly.

And this is understandable.

But if your relationship has been going on for a while, expectations should be discussed.

Does he want to get married again?

Does he see you as a potential second wife or just an occasional date?

If you don’t want to be the rebound girl, you should know his intentions.

Because if he can’t commit to you, it’s a big red flag.

7. His children are not accepting of you 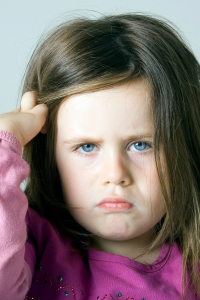 If his kids do not accept you, it could mean that they don’t approve of their father’s relationship.

The last thing you want is to get caught in the middle between the kids and their father.

The kids will likely come first, and if they don’t like you, it will be difficult for your partner to ignore their feelings for too long.

8. He talks badly about his ex all the time 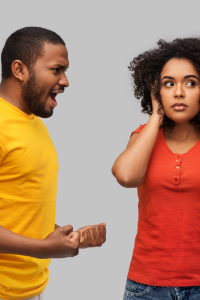 One of the biggest red flags when dating a divorced man is if he frequently talks negatively about his ex.

It’s normal for people to still feel some resentment toward their ex after they’ve split up, but it’s not healthy if this anger spills over into their new relationship or if he talks badly about his ex in front of others or on social media sites like Facebook.

This is a clear sign that he may not have fully healed from the end of the relationship, and it can also be a red flag that he might be holding on to some unresolved feelings or bitterness towards her.

Dating a bitter person can be a very toxic experience, so it’s best to steer clear of someone like this if you’re looking for a healthy relationship.

9. He has trust issues

If he’s still hung up on his ex-wife, or if he’s worried about getting burned again, then those trust issues will impact his new relationship — no matter how much time has passed since the divorce was finalized.

A relationship devoid of trust will become toxic eventually.

10. He doesn’t prioritize you 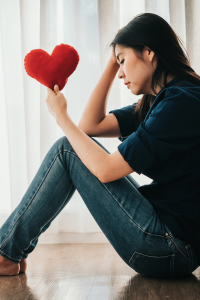 A divorced man is likely to have gone through pain and heartache.

He may be used to being the center of his universe and the sole focus of his attention.

So when he starts dating again, he may not be able to put you first in his life the way you need and deserve.

He may also prioritize his kids or ex-wife over you and make dating more of a convenience than an intentional commitment.

You should be wary if he doesn’t put in the effort to get to know you and build a meaningful relationship with you.

If dating is just about having fun for him, or if he seems uninterested in truly investing in your relationship, it’s a warning signal.

11. He doesn’t want to talk about the divorce or his ex

The first step in moving on from a divorce is acknowledging it happened.

If your guy won’t talk about the end of his marriage, consider that a red flag.

He might not want to open up about the divorce or why it happened in the first place.

He might still be emotionally invested in his ex and hasn’t fully accepted what happened and how much it changed him as a person.

He might also be hiding more unsavory details from you.

You want someone who can be honest with you about his past and present — not someone hiding something from you or himself. 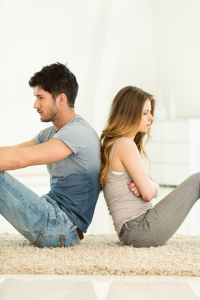 If your divorced boyfriend is constantly talking about his ex or if he seems preoccupied with her, that’s a red flag you don’t wanna ignore.

It could mean that he’s not over the divorce and is still emotionally attached to his ex.

If you feel like your relationship with him is overshadowed by his ex, you will not enjoy him.

You want him to be over his ex.

You don’t want to be a rebound, nor do you want to be constantly compared to some past love he’s still pining for.

You deserve someone who is ready for the challenge of a new relationship, not someone whose heart is still occupied by the thoughts of another person.

13. He doesn’t have a relationship with his kids

There are many reasons why a father wouldn’t be involved in his children’s lives after divorce, but if he has no interest in them at all, then this is an important red flag.

A man who has no desire to be part of his children’s lives is likely to be neglectful and unavailable — qualities that aren’t good for any relationship.

14. He expects you to pay for everything

When you first start dating someone new, it’s normal for you to split the bill on dates and outings.

But if he expects you to pay every time, something is off.

If this happens regularly, consider yourself warned.

He could be moving money around or hiding assets from his ex-wife to avoid paying alimony or child support payments (or both).

15. He has been divorced multiple times 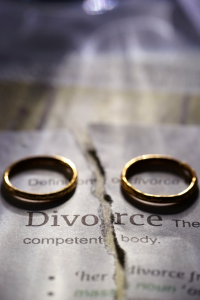 Last but not least, if this is his third or fourth divorce, then chances are he hasn’t learned from his mistakes yet.

He may be the type who prefers playing the field rather than settling down with one person.

Or maybe he just isn’t mature enough to realize what it takes for two people to make things work long-term.

So, if he has been divorced multiple times before, especially if it was due to cheating, then it’s a huge red flag!

Dating a divorced man can be tricky.

While there may be some benefits to dating someone who has gone through a divorce, you should be aware of these red flags.

If you’re thinking about dating a divorced man, be sure to take the time to get to know him and his situation before diving in headfirst. 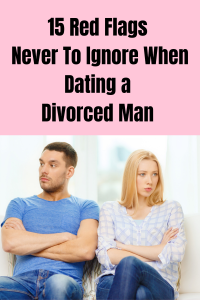