It’s better to know the signs he is forcing himself to love you than stay with him forever and realize later that he never loved you.

Every woman wants a man who loves her for real and is sure she’s who he wants, not a man forcing himself to love her.

The term “forcing himself” may be a bit misleading because it implies that a guy is lying to you about his feelings.

That’s not what this means.

If a guy is forcing himself to love you, I’m saying that he’s trying hard to make his feelings come true.

In other words, he cares about you but isn’t sure that he wants to be with you yet.

If this sounds like your situation, keep reading because the following are signs he is forcing himself to love you :

Signs He is Forcing Himself to Love You

1. He doesn’t seem to care about your feelings or emotions 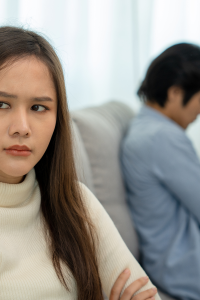 You’ve shared something deeply personal with him, and instead of asking questions and showing interest, he just shrugs his shoulders and changes the subject.

Even if he asks questions, you feel it’s out of obligation and not because he truly cares.

He’s not interested in knowing about your likes, dislikes, hobbies, or anything else that matters to you.

Smart women can always tell if a man asks questions because he genuinely wants to know them or because it’s what’s expected of them.

2. You find yourself making excuses for him

The way he treats you isn’t that bad.

He’s just in a bad mood.

He didn’t mean it.

He sent you a goodnight text recently, so surely that counts for something.

He’s too busy at work.

He’s late because he got caught up at work.

He didn’t call because he needed some time to himself.

You’re always explaining away his behavior, even when it isn’t entirely rational.

Giving someone the benefit of the doubt is normal, but if it is always inconvenient for him to invest in the relationship and go out of his way for you, he’s unsure of his feelings.

If you’re always left to shoulder the responsibility of keeping your relationship together, he’s not that into you, no matter what he says. 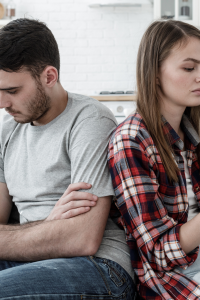 Everyone has their unique way of expressing love, but as long as it is genuine and authentic, it’s fine.

When you like someone, there’s nothing you want more than to communicate your affection.

You don’t need to be staring into their eyes every second to show it, but through regular and consistent actions, you show that your feelings are real.

There’s no doubt we all have a lot on our plates, but if you’re in a loving relationship, being present is crucial.

When someone forces themselves to love you, they’ll struggle to be affectionate with you.

No gentle touching or verbally reassuring you of his love by saying, “I love you.”

Even when he does, it feels forced. 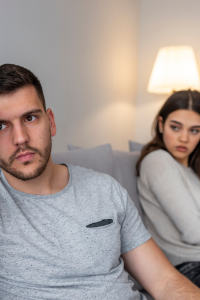 Whether you’re still in the honeymoon phase or going on a decade, your man should be open and honest with you.

Some men may even go so far as to hide the details of their daily lives from their girlfriends, which is a sign that they don’t want to share everything with them.

You should be in the loop about most things when you’re in a relationship with someone.

If he’s keeping his distance and avoiding sharing anything personal about himself, then it could be because he’s pushing himself to love you.

If a man is forcing himself to love you, he wouldn’t want to establish emotional intimacy with you.

And emotional intimacy is built through self-disclosure and vulnerability, which he denies you of.

5. He forgets important dates and events

He’ll conveniently forget about anniversaries, birthdays, and any other important milestones that might require him to step up when it comes to commitment.

If a man truly loves you, he’ll remember the most important dates in your life and will do his best to be there with you on those dates.

It is very common for people to forget important dates and events, but when it’s a recurring thing, it can signify that he is forcing himself to show love.

If your boyfriend is willing to go on dates with other women, he may be forcing himself to love you.

A man who truly loves a woman won’t want to see other people.

He should be a hundred percent committed to you.

If he was that much in love with you, he wouldn’t need to go out and find another woman to fill his time with.

If a man can’t or won’t be faithful, he’s not ready to be committed to you.

If you are involved with someone who sees other women, or even men, they’re not totally into you.

That’s why they need other people to fill the space you cannot fill. 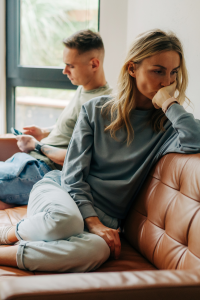 If he’s forcing himself to love you, he won’t want to spend too much time in private with you because the intimacy will make him uncomfortable.

He’ll try to limit those situations as much as possible so that he doesn’t have to feel vulnerable around you or risk having his guard down around you.

Even when you’re together, he might spend most of his time on his phone/laptop or his eyes on the TV more than on you.

8. He’s often angry with you 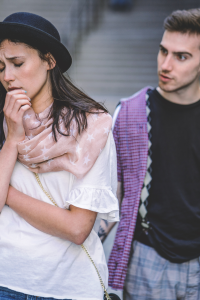 He gets angry with you and often seems standoffish and uninterested.

This can often happen when someone feels like they’re being forced into something they don’t want to do, like staying in a relationship that makes them unhappy.

9. He is not genuinely excited when he is with you 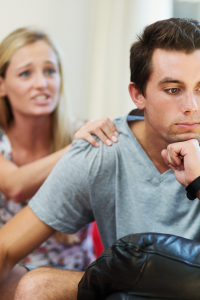 If he is forcing himself to love you, he will not be genuinely excited when he is with you.

He might pretend as if everything is fine and dandy, but deep down inside, he would want to get away from you as soon as possible.

10. He avoids talking about the future

If your boyfriend is forcing himself to love you, he probably isn’t planning on sticking around for the long haul.

If someone isn’t sure about where you stand in their life yet, they will avoid talking about things like where you see your relationship going in the future.

This means that he does not care about your relationship and the only reason he is in it is because of obligation or guilt. 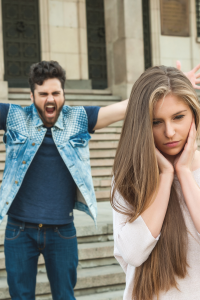 This is one of the biggest signs he is forcing himself to love you.

When a man is in love with a woman, he will treat her like a queen.

He will be attentive to her needs and wants; he will try to please her and make her happy.

This doesn’t mean he will always be a sweetheart and not annoy you sometimes, but you know his heart is in the right place.

But a man forcing himself to love you will act like a jerk more than a boyfriend.

He might occasionally yell at you and make you wonder if he loves you at all.

12. He makes excuses for everything

If he’s faking it, he’ll make excuses for everything that goes wrong in the relationship because it’s easier than fixing things or admitting that something needs fixing.

A man who wants a relationship with you genuinely will take responsibility for his actions and work on resolving issues to save your relationship and make things better between the two of you.

13. He’s not in any way possessive of you

If he’s not a little bit jealous of other men in your life, it could mean that he doesn’t feel possessive or protective towards you.

Excessive jealousy or possessiveness is dangerous, but in a loving relationship, some level of jealousy is healthy.

I love it when my man expresses jealousy when another man tries to get close to me.

It shows he’s concerned that someone wants to take his place, even if that’s not the case.

If your partner isn’t jealous, then it could mean that he doesn’t care about you as much as he should because he’s forcing himself to love you anyway.

14. He never compliments you

Complimenting someone shows you acknowledge them.

It shows you see their special qualities and abilities.

It could be their looks, personality, or intelligence.

Not complimenting a woman you claim to love shows you’re not paying attention to her enough to notice the special things about her.

Also, when you’re in love with someone, you want them to know what you think of them, which is usually done through compliments.

A man forcing himself to love you will not compliment you often because he doesn’t acknowledge how amazing you are.

He might be with you because of the benefits of dating you and not because his heart is with you.

15. He doesn’t want to spend time with your friends and family

If you have been dating for a while and your partner doesn’t like spending time with your friends or family members, then there’s a good chance that he doesn’t care for them much either.

A man who truly loves you and wants you in his life will want to spend time with your loved ones because he knows how important they are in your life.

16. He can’t look at you when speaking to him face-to-face 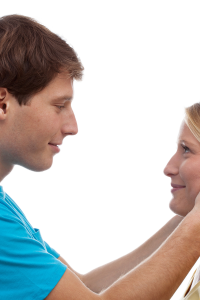 Eye contact is an integral part of a healthy romantic relationship.

When you’re in love with someone, you want to look into their eyes when they speak with you so you can see them and connect with them emotionally and physically at the same time.

This will be lacking in your relationship with a man forcing himself to love you.

17. He only wants what he can get from you

One of the reasons a guy will force himself to love you is the benefits he’s enjoying from his relationship with you.

What is he benefitting from you—money, place to live, physical intimacy, connection, etc.

If he’s all about what he can get from you, it’s one of the huge signs he is forcing himself to love you.

If you feel like you’re forcing yourself on him and he doesn’t seem interested or receptive, this could be a sign that he is forcing himself to love you.

If you can relate to these signs he is forcing himself to love you, then that’s probably the case.

And that’s not how it’s supposed to be.

You want a man who loves you unconditionally, not just in spite of the fact that he doesn’t want to be with you.

He might not be doing this because he wants to hurt you; it could be because he feels he has no other choice.

Whatever the reason is, the fact remains that your guy isn’t emotionally invested in your relationship and doesn’t want to be there — even if he says otherwise.

Have a serious conversation with him to know where his head is at, to decide whether it is worth staying with him or not.

Otherwise, things could get ugly for both of you sooner than later. 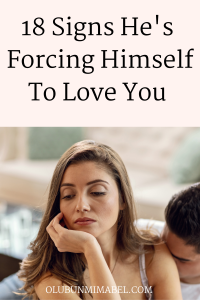