It’s the age-old question: does he like me or not?

Sometimes it feels impossible to tell, especially when he’s being a bit cagey about his feelings.

If you’re trying to figure out whether he likes you or not, watch out for these signs.

He might be giving them off without realizing it!​

Sometimes men have a hard time showing their feelings and will hide their emotions.

Here are the tell-tale signs he likes you but is hiding it in order to protect himself:

15 Signs He Likes You But is Hiding It

If he likes you, he will subtly glance your way often.

If he is constantly looking away when you make eye contact or seems to be trying not to look at you, then he is likely hiding his feelings.

On the other hand, if he makes prolonged and intense eye contact with you, it could mean that he’s really into you.

2. He tries to be around you as often as possible without being too clingy

He tries to be around you as often as possible without being too clingy.

He will find excuses to hang out with you and your friends, but won’t take it as an opportunity to flirt.

If he likes you, he will want to be around you as much as possible.

3. He compliments you but never in a way that is too personal

He compliments you but never in a way that is too personal.

For example, he might say “you look beautiful” rather than “I love the way you smell.”

If he’s into you, he won’t be able to help himself from making these compliments sometimes.

He will always notice the little things about your appearance and personality that make you stand out among everyone else.

4. He checks in with you often – even if it’s just for five minutes or less

If you notice that he initiates a lot of conversations with you and checks in on how your day is going.

Even if it only lasts for five minutes, he is open to getting to know more about who you are as a person.

He might even ask questions throughout the conversation just so you can keep talking longer.

This doesn’t mean there isn’t someone else though!

Sometimes people do check up on others because they have nothing better to do or are trying to kill time before doing something else or seeing someone else.

It’s not an exact science but definitely worth looking at signs like this closely when noticing them happening over long periods of time instead of occasionally.

5. You get the feeling that he is trying to impress you

Men rarely try to impress women who don’t mean anything to them.

He may take more risks or may even change his appearance in order to look more attractive to you.

He might deliberately come up with topics of the conversation which will interest you so he can talk more with you and impress you with his knowledge and skills.

6. He always seems happy around you 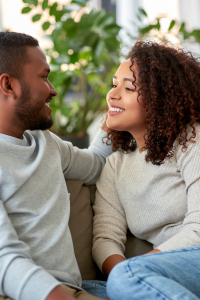 When you like someone, you do your best to be around them.

You want to see them as much as possible because you enjoy their company.

So, when a guy is really excited to spend time with you, he probably likes what he feels in your company.

If a guy likes you, his body language will give him away every time he sees you through subtle signs like maintaining eye contact, smiling and laughing easily, and paying attention to what you’re saying instead of what’s going on around him

7. He makes an effort to remember personal details about you

When a guy likes you, he’ll demonstrate signs of interest by making an effort to remember personal details about you-your favorite color, favorite food, favorite TV show, the college you attended, and course you studied.

He simply remembers the things you tell him and seems genuinely interested in your life and the things that are going on with it.

He even keeps track of the things that interest you so that he can bring them up later during conversations.

He asks questions about your opinion on certain topics and seems genuinely interested in getting to know more about what makes you tick.

8. He starts conversations with YOU

If a guy likes you, there’s a good chance that he’ll start conversations with YOU instead of waiting for you to approach him.

It could be anything from commenting on the weather to asking how your day is going- basically anything to keep the conversation flowing smoothly between the two of you.

If it seems like he only talks to you when he needs something or when there’s nothing else better to do, then that’s definitely a sign he’s not interested.

9. He stares at you a lot, especially when he thinks you’re not looking like he’s trying to memorize your features 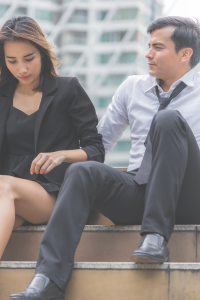 Guys might try to act uninterested when they’re really into you.

He might catch himself staring and look away when he catches your eye.

This could also happen if he’s shy around you and doesn’t know what to say, but it’s a lot more likely if he actually likes you.

When he’s genuinely interested in what you say, he’ll ask follow-up questions to show it.

The next time you two are together, pay attention to how often he asks questions versus how often he talks about himself after your initial questions.

If you’re doing 80 percent of the talking and he’s doing 20 percent, take it as a good sign — not only does this mean that he finds you interesting, but it means he’s trying to understand your interests better so that he can get closer to you.

11. Repeating or rephrasing your words

He might also frequently interrupt with phrases like “me too” or “I know exactly what you mean.”

This shows that he’s paying close attention to what you’re saying.

12.  When you approach him, his face lights up and he smiles from ear to ear

He’s simply happy to see you.

A guy who likes you genuinely is going to feel happy when he sees you.

13. He tries to please you or make you comfortable

A lot of times, when a guy likes you, he’s also trying to hide it.

That’s because he has one of two tendencies.

He either becomes distant because he doesn’t know how to handle the situation, or he becomes too available because he wants you to like him.

Most men try to strike a balance between the two extremes and end up being too much of neither.

But if you notice your guy is constantly trying to please you or make you comfortable—maybe by getting you a drink, offering you a seat, and sacrificing his own comfort for your benefit, it might be a sign that he likes you and is hiding it.

He gets jealous when other guys talk to you.

If he gets upset when another guy starts flirting with you, this is a good sign that he has feelings for you and doesn’t want another man taking what’s his.

15. He touches you often 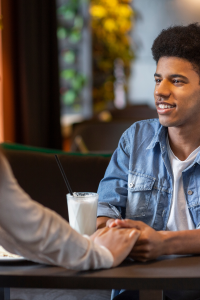 When a man likes you, touching you can make him feel more comfortable around you.

It’s also a good way for him to get close to you without seeming too forward or obvious.

If you notice that your guy touches you quite often—more than friends usually would—he’s probably trying to let his true feelings show through.

Why is He Hiding His Feelings Despite Liking You? 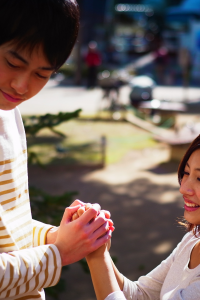 Shyness can be a major stumbling block when it comes to relationships.

It often keeps people from expressing their true feelings, which can lead to misunderstandings and heartache.

If you’re interested in someone who seems to be shy around you, don’t give up on them just yet.

Oftentimes, all it takes is a little bit of encouragement to help them open up.

Be understanding and patient, and let the person take things at their own pace.

Eventually, they’ll reveal their true feelings, and you’ll both be happy that they did.

Truth be told, no one likes to be rejected.

It’s always a possibility that the person may not feel the same way about you, and expressing those feelings can be daunting.

This is especially true if the two of you don’t know each other very well.

So, a guy might like you and hide it because he’s afraid of being rejected by you.

A guy might also hide his feelings if he has trust issues or commitment issues.

He may not want to get too attached to someone in case things don’t work out in the long run.

He might hide his feelings even though he likes you if the dating world is alien to him.

He might not know how to navigate the dating scene.

5. He’s Not Ready for a Relationship

If for any reason, he’s not ready to be in a serious relationship, he might hide his feeling from you.

For instance, he could have a girlfriend he’s yet to break up with.

There could also be some other ones that prevent him from expressing his feelings towards you.

If the above signs that he likes you are present, and he’s not saying anything, try to find out why he’s hiding his feelings.

Knowing this may help you to be empathetic, patient, and understanding.

If you are bold enough, you could ask him why he’s giving you mixed signals.

You are asking because you want to clarify things and not make assumptions that could hurt either or both parties in the end.

While should be patient and let him take things at his own pace, you shouldn’t let good guys who know what they want (YOU) pass you by. 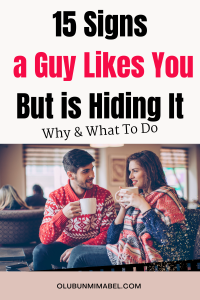