“I’m so confused. I have been friends with this guy for a while now and he has a girlfriend, but I think he likes me.”

This is the dilemma many women find themselves in today.

One of the most difficult situations to deal with in life is liking someone who has a partner.

This person may either be in an official relationship or just someone they are hooking up with casually.

It would be easier if you don’t like him if he loves you, even though he has a girlfriend.

But you like him, and unfortunately, he doesn’t seem to be a free man.

This is a tough spot to be in.

But, don’t worry, this article will help you navigate your way out of the tough spot and help you to a place where you can make the best decision for you.

He Has a Girlfriend But I Think He Likes Me: How Can I Be Sure

If he has a girlfriend but he is flirting with you, you want to be sure that he likes you for real and not just playing with you or out to use you.

Below are the signs that he likes you even though he has a girlfriend:

If he is always trying to help you and be there for you even though he has a girlfriend he should be doing that for, then he likes you.

This shows he cares about your well-being and thinks of you first before his girlfriend or other friends he may have that are girls.

2. He Wants to Impress You

If he is trying to impress you, he likes you, and he wants you to like him.

If you don’t have feelings for someone, you won’t care about their opinion of you, so you don’t try to impress them.

This is the same with if he has a girlfriend but he likes you.

3. He Seeks Your Opinions on Things

If he seeks your opinion on things, he likes you.

He could say, “I was thinking about doing this, but what do you think?”

This is because he cares about how you feel or what your thoughts are on the subject.

Remember, he wants to impress you.

For that to happen, he will crave your opinion on things.

4. He Wants You To Be Around Him A Lot

If he wants you to be around him a lot and he is willing to do whatever he can—including hanging out with his girlfriend less or doing things he doesn’t really want to for the sake of spending time with you, then there’s no mistaking it:

This shows he values your presence in his life and he wants to make sure he is around you as much as he can.

He makes an effort for this because he knows it will be worth the time spent with you, even if he has a girlfriend.

He is doing this because he likes you, not because he wants his girlfriend to be jealous or upset

5. He Always Wants to Talk to You, So He Never Ignores Your Texts/Calls 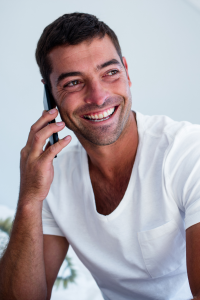 When you like someone, you will always want to talk with them.

It’d seem like you just can’t get enough of them.

You can talk or chat on the phone for hours until you or he has to do something else.

If he is always wanting to talk with you, he likes you and wants your attention.

If he is always excited about talking with you, even if he has a girlfriend he should be spending time with, he likes you.

6. He Doesn’t Like Talking About His Girlfriend With You

If he never talks about his girlfriend with you or he avoids talking to you about her, then he doesn’t like that he has a girlfriend.

He may tell stories about his girlfriend, but he doesn’t sound like he loves her and he has a positive attitude about the relationship.

He acts bored when she comes up in conversation and he tries to get off of the topic quickly.

7. Talking About You Is One Of His Favorite Things To Do

If he talks about you, he likes you.

He may talk about how he wants to spend time with you or what his plans are when he sees you next.

Or he might even compliment you, such as mentioning how beautiful your eyes look, how nice your dress is, or even how smart and lively you are.

He is complimenting you because he notices you.

It doesn’t matter if it’s a casual comment or something deeper he has in mind.

He is interested in you and he wants to make sure you notice. 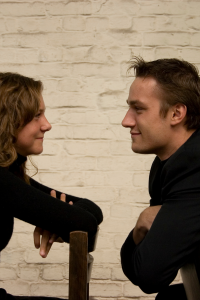 When he looks at you, he loves it.

He may look away quickly or he might stare for a little too long without realizing he is doing it—but his eyes are telling the truth:

He likes you, and he’s interested in getting to know you better.

He likes looking at you because he thinks you are beautiful; he is intrigued by your personality; he is interested in what makes you tick or he wants to see if there’s a potential relationship brewing.

So, you can tell he has feelings for you when he looks into your eyes – even if it was just for a moment.

He Has a Girlfriend But I Think He Likes Me: What Do I Do?

It’s good that you know the signs that he likes you even though he has a girlfriend, but that’s not enough.

What are you going to do about it?

Do you think he likes you enough to break up with his girlfriend for you, or is he just playing around and seeing how far he can take this before he gets caught?

Maybe he’s not as interested in you as much as he seems.

Maybe there’s a reason he has a girlfriend now and by breaking up, he will only get into more trouble.

If he does like you enough to break up with his girlfriend for you, how will you feel?

Are you ready for a relationship or are there some things about him that aren’t ideal and could make this difficult on both of your ends?

What exactly do you do if a guy likes you but has a girlfriend?

1. Put Yourself First: What Do You Want?

Asking yourself this question will help you put things into perspective and gain insights into the situation.

Do you want to be in a relationship or do you just want the satisfaction of knowing he likes you?

Putting yourself first will take away any unnecessary stress that comes from pursuing an unavailable man.

How do you feel about this guy? What he wants may not be what you want, and that’s okay!

You don’t have to put yourself in a situation where your feelings are going to get hurt.

Maybe he is the best thing ever, but maybe he isn’t.

It doesn’t matter how great he seems because if he has a girlfriend; he isn’t available!

However, you don’t have to get into a relationship with someone who has a girlfriend just because he likes you, but if he’s the best thing ever, then why not?

WHAT DO YOU WANT?

If you don’t know what you want, you’ll only be trapped in a web of confusion and frustration.

2. Simply Ask Him What He Wants

Really, this is probably the best thing to do in this situation.

Spare yourself unnecessary stress and guesswork.

If he has a girlfriend, he’s not supposed to be talking to other girls anyway, so it shouldn’t be hard for you to just ask him what he wants!

Perhaps there are things he needs to work out with his girlfriend first before pursuing a relationship with someone else, or it could also mean he wants something more casual!

If this is the case, he’s probably still seeing his girlfriend on the side.

Don’t put yourself in an unfair situation where he is taking advantage of you because he has a girlfriend, and he still wants you!

Be honest with what you want and if he can’t be honest with you, then walk away even though it may hurt for now.

Don’t let yourself play the second fiddle in someone else’s life.

He needs to be able to decide on who he wants, and not try to eat his cake and have it too.

It’s important to know what you’re comfortable with when it comes to your love life.

Set boundaries for yourself so he knows where he stands, and also so he doesn’t take advantage of the situation.

Setting boundaries will also prevent you from being a victim of an undefined relationship or unreciprocated love.

You don’t have to be in a relationship just because he likes you or wants something casual!

You are allowed to like someone who is available and wants you.

You don’t have to settle for less than what you want.

It’s okay to take some time off from guys and focus on yourself so you have a clear head when you start looking for relationships again.

You can’t blame him for his current situation, but he needs to make a choice on what he wants because you deserve better! 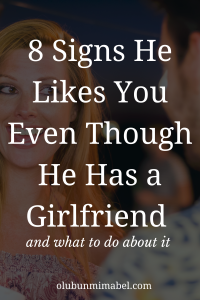